The weekend of the generic previews rolls on, homies! I figure for this blogs inaugural weekend, I'd hit up both our money sports, so here goes.
So, let's be real. I love basketball. Like, I think more about it per day than you probably do in a year. If anybody in the future days of this blog ever, ever questions how much I care about basketball, I will send them to this post. And more specifically, I will forward them to this picture of my Les Paul. 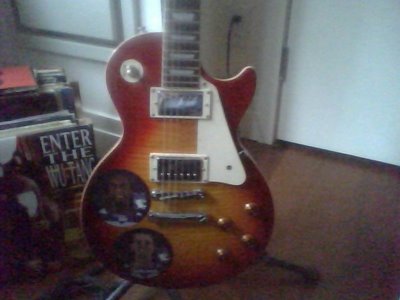 GAME OVER. I win. I ATTACHED FREAKIN STICKERS OF PAT HOULIHAN AND MARLON DAY TO MY GUITAR. EVERY TIME I PLAY IT, ANYBODY WATCHING MUST REMAIN TRANSFIXED BY THE CONSTANT SMILES OF WALK-ON BASKETBALL PLAYERS, BECAUSE THEY'RE FREAKIN ADHERED THERE. PERMANENTLY. Point being, I like Northwestern basketball.
(Full story: senior day, they printed up stickers of every Northwestern senior. I decided to take one of each as I entered. Then, I thought to myself: hey, why don't I take three or four more of the walk-ons? Is there really going to be that high of a demand for the smiling face of Pat Houlihan?
It turned out, there wasn't. I was satiated with the five Houlihan heads I already had, but on the way out, on a whim, my friend and I decided to see if there were any stickers left. The Sterling Williams and Craig Moore piles were gone. But there were two industrial-sized rolls containing smiling face after smiling face of Pat n' Marlon, just waiting to be picked up. So my friend and I ripped off about 15 a piece, and started applying them to any and every surface that we felt needed walk-on heads, including but not limited to the University of Iowa team bus parked invitingly outside the arena. It gave me great pleasure knowing that they would have to spend the entire ride with Marlon's eyes staring victorious bullets into their bus all the way back to Iowa City. [Full disclosure: I also slapped a magnetic schedule on the Minnesota Golden Gopher's bus. I have a bad habit.] Anyway, I still, to this day, have about five stickers of each left. And I decided my guitar would look badass with some Pat Houlihan attached. I was wrong, but the sticker remains as a testament to his silly looking jump-stop free throw motion.)

Anyway. I have a funny feeling older NU fans probably won't consider me a true fan. I was a freshman last year, and, well, in my first year, the football team went to a bowl, and the basketball team won the first EIGHT games I attended, a record sure never to be broken. (I had journalism class during the Purdue game. Had to wait till Illinois to get my dreams smashed.) Traditionally, Northwestern fandom is all about pain and sorrow, and I've had little of it. And they look at me like I'm crazy when I say that I expect good things from our team. Now, Northwestern fans can be optimistic short-term - they go into every game thinking we can win - but when you put out big projections like "tourney", they brush you off. Nope. Not with Carmody. Not at our school. Never. Not without Craig Moore, Carmody needs shooters! No! No no no!
I'm not going to predict a tourney berth this season. I'm far too superstitious to say anything that jinxy. But I will say this: if not this year, when?
Northwestern has never, ever been to a tourney. We all know that, we all know we're the last BCS school, we all know the sad, pathetic facts. But everybody at the school dreams of a hypothetical Selection Sunday where we're sitting around, watching the brackets pop up, and there - at like the 12th, or 13th seed, maybe - Northwestern? Northwe-NORTHF***INGWESTERN? And Evanston bursts into flame or something. We don't even need to win. Jim Phillips said it best in that Yahoo article, which I can't find right now: I can get hit by a bus that monday, I just need to see us in the tourney.
And this year is going to be our best chance for what looks like a long time. Now Craig Moore was a ridiculous shooter - he shot a lower percentage than Juice, and Juice has comparable range, but the shots Moore could get up successfully and get in were amazing, he barely needed any room - but I think that skill is replaceable. Next year, NU will be able to run out a lineup of something like Juice-Crawford?-Shurna-Coble-Mirkovic where every player has a damn good chance of hitting a threeball. (Obviously I've never seen Crawford play, and we might opt to start somebody else, and will probably start Rowley, but I'm a big Mirk fan.) We can, and will, be able to spread the floor. No one guy can replace Moore, because there just will never be a player who can camp out beyond that line all possession, waiting for his guy to give him just the right amount of room for him to catch and shoot, or come off screens like him - although rumors are that Fruendt is a lights out shooter, and that recruit Marcotullio is too - but we can have lineups where any one guy is capable of popping out behind the line for a three, and I think in a Princeton set with all sorts of guys constantly moving and setting screens and pick-and-pops, that could be as scary as it was lasat year.
So that's why I feel we lose relatively little. But as for why I feel this year is one of them now or never joints, well, it's obvious. Kevin Coble is one of the best players we've had in a while, and will be for some time. John Shurna is not Kevin Coble, and although Drew Crawford is supposedly all that, Kevin Coble is all that and a bag of chips. (Sweet Spicy Chili flavored Doritos, at that.) Coble can turn busted possessions into buckets. He can do this:

Heh. Go ahead, watch it again. I know you want to. (Also note the absolute cojones performance from Juice. I mean, Christo. That one shot from the upper peninsula of the floor marker might have made me happier than anything in the history of things.)
So let's be real. For NU, Coble is a once in a long-time scoring talent. And, hey, also leads our team in rebounds. (He's not as good a rebounder as some of the other, less minuted heads like Luka, but with Coble, he's tall and he literally can't afford to take him off the floor.) Without him, our team would be, well, hideous. So, to sum up this super-long post in one, annoying sentence, here it is: NORTHWESTERN BASKETBALL: NEXT YEAR IS NOW.
Oh, yeah, and we should fire Bill Carmody, but that's 43 posts for some other time.