Yeah, onto the D. Much less interesting to write/read about, so, sorry about that, but, hey, if you want me to write something about NU sports every day in the middle of the friggin summer, which you clearly do, well, this is what you get.
Since there's no clear order of where to start on defense, like there is on offense with the QB, I'm going from the inside out, or something like that.
Days Left Til Football: 51. 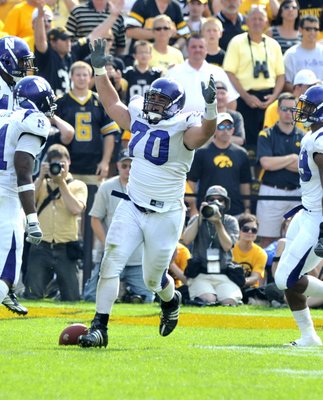 Who did it last year?: Most notably, the guy in the photo above, John Gill, who, judging from his excitement and the relative depression on the faces of Hawkeyes fans, is pictured immediately after recording a game-saving pass deflection on fourth down against Iowa this year. Anyway, Gill was a pretty dominant DT who started over 40 games at NU. Unfortunately for us, he's now trying to wiggle his way onto the Detroit Lions roster, and you can go ahead and insert your joke about how that's unfortunate for him too, but I'm too classy for that.
Gill was joined by now-junior Corbin Bryant, who started most of the year as the second DT in our 4-3 defense before an injury at Michigan, and now-senior Adam Hahn, who had started the two years before, started the rest of the year.
Marshall Thomas also played in every game at DT, although quite frankly, I don't remember him, and Jack DiNardo appeared in eight games, but, again, no recollection of this.
Who will do it this year?: Bryant and Hahn, the two guys with starting experience, will start.
The aforementioned Marshall Thomas is a true senior, and should also get some serious snaps.
That was easy.
Is that an improvement?: Well, no. John Gill was a serious talent, the type who was clearly good enough to start four years ago and just got better as he went along. Bryant and Hahn are two guys who are pretty good, but, not football-on-Sundays good, and it might show a little in our ability to stop the run. Luckily for us, we have two grade-A beasts roaming the D-end positions, so our line won't be too bad. And, when it all comes down to it, these guys have played before, so it's not like newbies are going in for Gill. But it's a drop-off.