Coming down the stretch of this series, which is a shame, because I clearly have nothing else to write about.
Days Left Til Football: 44. 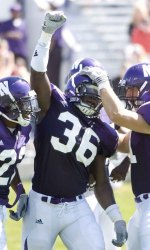 Who did it last year?: On the outside, senior Prince Kwateng, the dude doing something in the photo above, and Quentin Davie started every game. Kwateng was the team captain, and had a pretty solid season, with four games with more than ten tackles, including 13 in the Alamo Bowl. Davie was relatively nice with it as well as a sophomore.
In the middle, Malcolm Arrington seemed like an invaluable part of the defense for the first half of the season. However, he turned out to be just regular old valuable, because Nate Williams came in and replaced him effortlessly, doing as good a job as Arrington had been.
We also graduate a senior named Mike Dinard, who was a backup OLB who started games in 2006 and 2007 before entering a backup role last year. Sadly, my only recollection of him was a particularly egregious late hit in the Indiana game, but then again, I have a knack for only noticing bad things.
According to the record books, Brad Phillips started two games at outside linebacker, but I see him as a safety first with the ability to play up a few yards if need be to allow Mike Hankwitz to get creative with his defensive setups.
Who's gonna do it this year? Williams and Davie will reprise their roles from last year. Replacing Prince Kwateng will be TPD favorite and NU folk hero, Ben Johnson, who played a smattering of backup linebacker and struck fear into the hearts of opposing special teamers, and, all things told, should be a pretty good player.
There's a few other guys who I can't guarantee won't play, so, for the sake of completeness, I'll mention them: Chris Jeske has been injured in a variety of ways for his entire NU career, and is a senior now, and played a bunch of reps with the first team in spring ball, so don't expect his career to end with only blocks to his name. Aaron Nagel transferred from Notre Dame and sat out last year due to NCAA rules, but being a Notre Dame recruit doesn't mean as much as it used to. And as we all know by know, they have a bit of a knack of messing up their LB recruiting priorities anyways. Bryce McNaul was a backup last year, and thus got into the games a little bit, but I don't know much about him.
Is that an improvement from last year? It easily can be. We know Davie and Williams can play from their roles last year, and if you're not a Ben Johnson fan yet, you will be. He's 6'4 and his player profile tells you he was a great high school receiver and set multiple records in track. To sum it up, we have a young unit with two juniors who have proven themselves with starting experience and a sophomore who looks primed to break out.
All said and told, linebacker should be one of many solid units on the defensive side of the ball this next year, and in 2010 for that matter.