Share All sharing options for: BREAKING: 87% of all NU Graduates now professional football players in Finland

Because I'm a journalism student, and therefore, someone who is trained and specializes in finding and reporting the information which I decide you, the readers, need to know, I mentioned in the the cornerbacks post that David Oredugba is playing professionally in Finland. Just Oredugba alone made Finland the world's largest importer of ex-NU defenders. (They had previously been in a 195-way tie for last.)

This important information dinked and dunked around the internets, and eventually, somehow word who got to LTP, who brought us this post with the news that Deante Battle, who was a starting cornerback round Evanston way for 3 years, is also playing in Finland.
Because I'm a journalism student, and therefore, adept at finding information which I discern will interest my readers, I'm here to break yet another story: Demetrius Eaton, the ex-NU linebacker, is a teammate of Battle's on the Kouvola Indians.
Dear rest of the world: you've been scooped. Deal with it.
As you probably were able to tell by my borderline obsessive coverage of Kyle Rowley's exploits for the T and T national basketball team, I've got a bit of a thing for fledgling American sports in countries that aren't America. So here's my really long post about Finnish American football, plus, I found the evidence that all this is actually true that I was looking for in my last post. No help from all of you, though, so nobody wins the prizes I promised. Unfortunately, figuring things out with this has been a little difficult, considering Finnish is a language most closely related to Hungarian, and therefore, is like the bottom 5 least decipherable things possible.
So: David Oredugba is, as noted, a cornerback for the Helsinki Roosters, the 14-time winners of the American Football Association of Finland. Because everything in Finland makes sense, this league is abbreviated as the SABJ. In the last post, I was dying for evidence that this is true, and here it is: an interview Oredugba did with some guy with a thick Finnish accent, just after playing his first game.

So, yeah: good to see our ex-fourth-string cornerbacks are enjoying themselves. Also, sweet high-top fade. If I knew he was rockin that thing under his helmet at NU, I would've had a new favorite player.
Meanwhile, onto Battle and Eaton: unlike Oredugba, these guys don't seem to be living the good life. Battle and Eaton, as noted, are signed with the Kouvola Indians. Unlike Oredugba's team, the Indians aren't in the Finnish American football big leagues. They're in the I-Divisioona, which, because everything in Finland makes sense, is the second level of Finnish American football, the AAA of Finland's thriving gridiron scene. To add insult to injury, while Helsinki is a capital city and has over 500,000 inhabitants, Kouvola's wikipedia page describes it thusly: "Kouvola has a reputation of being a dull and uninteresting place." So pity Deante and Demetrius a little.
When it comes to football, the two are doing pretty well as far as I can tell. I would assume this is because these are ex-Big Ten players, and they're playing in the second-best league in Finland, a league where Stefan Demos could probably pass for a right tackle. Both are playing both ways, and have various articles written about them in Finnish newspapers. Of course, I don't know what these articles say, because Finnish ain't my strong suit, but the inordinate amount of times each name pops up both in these newspaper articles and on team websites makes me assume they're doing well, unless the authors are sadistic and love ragging on people excessively.
Deante has even gone so far as to post a highlight reel of himself on youtube, playing in Finland, which I'm thrilled about, because it provides my much needed visual evidence that there's Finnish dudes playing football.

I like Deante's choice of Young Dro as highlight reel music, and really like the clips of him absolutely levelling various hapless Finns who have probably never been tackled by an actual football player before, then standing up and yelling various things at their possibly lifeless bodies.
However, judging from this thing he wrote (on a site that only appears to feature ex-NU athletes - anybody know the deal with that? Gotta be NU-grad founded or something), Deante doesn't seem to be enjoying himself too much in Finland. That's among the more depressing things I've ever read, so, Deante, cheer up.
Because they're Americans playing American football in Finland, there are numerous photos of Deante and Demetrius doing dramatic things. Demetrius is #3, Deante is #2: 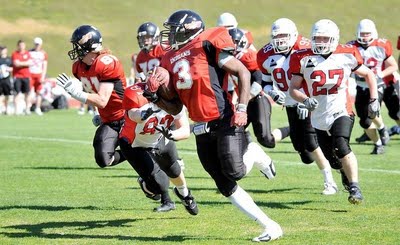 Is he looking at the kid in the grey's badonk?

My favorite part of this photo is the startled ref.

Anyway, that's that. However, I'm still hungry for more information, as this whole Finnish football thing raises more questions than answers: how well are these guys actually doing, outside of photos? Who put them in touch with random Finnish football teams? Do they ever have little NU reunions in Finland? Considering I haven't seen one image with fans in the background, how do these guys get paid? Is Finland scouting NU games, and if not, how come the ranks of Finland's football finest are populated by so many NU grads? And most importantly, why in the name of all that is holy are they playing professional football in Finland?
Anybody with answers to any of these questions: come forth. First person to get me in touch with an actual Finnish football player, NU grad or not, wins my undying love.