Tyrell Sutton is The Real Deal.

Share All sharing options for: Tyrell Sutton is The Real Deal.

Yes, much of NU history is before my time, but I'm still familiar with this photo: 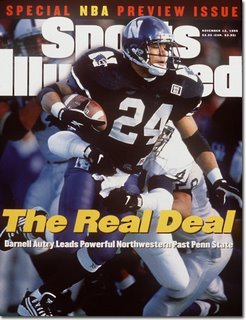 Anyway, another NU running back made his way into the pages of America's favorite sorta outdated sports mag (which will hopefully ignore that thing I said about them being outdated if I ever apply for a job there), as Tyrell Sutton managed to work his way into the vaunted Pop Culture Grid in last week's issue. Check it out here.

The lower gas prices comment was confusing at best, and the John Mayer thing is a little bit embarrassing. Other than that, Tyrell's responses were your run-of-the-mill pop culture grid answers, and the real confusing thing in the grid was Juan Diaz picking The Joker as his example of a mad man, with the reasoning being "for trying to mess with Batman." Because, I mean, that movie was out like, a year ago, and because he seems to be ignoring the whole thing about the Joker being a psychopathic killing machine who enjoys diabolically laughing, pathologically lying about his past, and forcing people to discover the darker sides of human morality by subjecting them to sadistic tests. Because I'd consider that the #1 reason he's a mad man, and the whole "messing with Batman" thing would be secondary to me. But Tyrell managed to get out of the whole process relatively unblemished.
Anyway, it's good to see that Tyrell is becoming a legit enough NFL player that he's getting into SI. He keeps on doing good things for the Packers - he didn't have as many rushing yards this week, but got into the receiving game and was the Packers' primary kickoff returner. He's definitely having the best preseason of any ex-Wildcat, so, good for Tyrell.
And by the way, the comments section has been rocking recently. I like that. Keep it up.