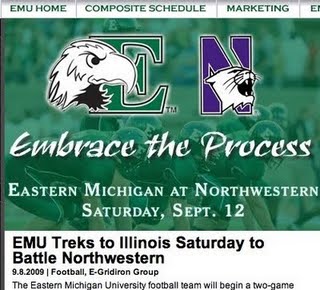 I know, I know, I said I wouldn't do game threads, but I'm trying it out. I have my reasons, punks, so don't ask. Or do. I'll probably answer you.
First off, you should be at the game, not reading things on the internet. (You still have time to get up and go if you're in the area, folks!). But if you're not, stop by and comment.
I know it probably makes more sense and is much classier to go and comment on LTP, and by all means, go ahead and do so, but I'd like to get a game comment section going. If it doesn't work, it doesn't work, but I'm tryin it. I'd like to get a running commentary going, so, hey, yo, say something, and I'll say something back.


Before the game, here's some links to other things I wrote about the game, of course, you could just hit the "EMU" label, but, hey. Links.

Poll results: 59 of you voted, 58 of you think that NU will beat EMU. One of you is either a rogue EMU fan, a reader with poor motor skills trying to vote from an iPhone, or someone absolutely tripping balls right now. Good luck with that, dude.
So, if you feel the need, comment below. I couldn't come up with an intriguing reason for people to comment, so I struck a deal with ex-Towson offensive lineman Jermon Bushrod, currently pictured below. He promised me that for every quarter that you don't comment, he'd murder a helpless animal with a sledgehammer.

He hasn't picked his victim yet, but inside sources tell me he's deciding between a bunny and a month-old Jack Russell Terrier.