This is Your Quarterback?: An Homage/Hatefest to Greg Paulus. Mainly a hatefest.

Share All sharing options for: This is Your Quarterback?: An Homage/Hatefest to Greg Paulus. Mainly a hatefest.

This. This is your quarterback?
Greg Paulus would've been one of the least likable players in basketball even if he didn't play for Duke, the least likable team in the country. Duke would be the least likable team in the country even if their coach wasn't Mike Krzyzewski, the least likable basketball coach in the country. And Mike Krzyzewski definitely didn't need Greg Paulus to be the least likable basketball coach in the country. It's a holy trinity of unlikableness, and from here, Syracuse found a quarterback.
I mean, that guy? That guy who slapped the floor and played way way too intense defense to overcompensate for not being very good at it and reminds you in every way of that dicky guy in your pickup game who yells at his teammates and mugs the crap out of you on defense and then turns around and yells AND ONE when he shoots and actually expects you to give him the ball back when he misses saying "BUT I SAID AND ONE YOU FOULED ME" even though you barely even touched him and actually calls charges on people in a pickup game, who went to the school that makes NU look diverse and screams "overprivileged kids from Jersey" that everybody was surprised that their lacrosse team WASN'T going out and raping poor strippers, and whose coach is that arrogant cocky guy whose MO is leading talented teams to underwhelming tourney performances for teams that manage to be worse than the sum of their parts and has a freakin penchant for recruiting top 5 talented players and trying to jam them into his system like square pegs into round holes until they don't have much of a chance at all of being successful at the pro level you should be thankful this isn't a 2,000 word diatribe about the NBA careers of Josh McRoberts and Shelden Williams and/or the likelihood that an athlete like Kyle Singler has anything resembling a good NBA career, the guy who played at that school with that coach, that guy? (I WRITE RUN ON SENTENCES WHEN I'M ANGRY)
That's your quarterback? Man. Jesus. Wow.
That being said, I'm a bigger basketball fan than I ever have been or will be a football fan. Way bigger. Yeah, I watch baseball in the summer, and my fall weekend afternoons are totally engulfed by football, but they're not ball, they're not the game I was raised on. And when you're 6'2 and still can't touch rim, you grow to develop a hatred of one certain class of people: those who are talented enough to play basketball, but don't really like it that much. (ROT IN HELL, MARK HENDRICKSON!) This is why as much as I love mobile quarterbacks, I sort of hate Terrelle Pryor. And it even makes me question the GOAT for that 1.5 year stretch where he cast aside the game for some other game which he wasn't good at, realized he wasn't good at it, and came back.

But on the flip side, I've always considered the rare few who choose ball over football, baseball, or whatever sports they're good at to be near-saints. I loved Charlie Ward as a kid, until I found out he was an anti-semite, and now I only like him. Nate Robinson was a ridiculous cornerback, and at 5'7, it was probably a long shot for him to go pro in basketball instead, and I've always loved him even more for that.
And with this tortuous reasoning, I hate to say this, but I respect Greg Paulus. Yes, he was the absolute bottom of the barrel when it comes to basketball players: he wasn't that great, and he's a complete and utter tool. But he was a great high school basketball player, and a great high school football player, and when he came to that fork in the road, he took the right path, and even if he has a good year and went pro, people will still remember him as a baller, not a quarterback. So, despite all the aforementioned reasons why I really, really dislike Greg Paulus, I honestly have respect for the guy.
That good? Alright, now I can post video of him getting his sh*t handed to him.

I'd say Greg Paulus is the most yammable-on guard I've ever seen. I've seen decent mixes of people getting dunked on for centers whose defensive games revolve around getting blocks, and who have been in the NBA for decades (Shawn Bradley, Theo Ratliff, and Jermaine O'Neal all have targets on their backs, and should really be taught not to jump sometimes), but Paulus, for a guard, who played a little over 100 college games - that's an NBA season and a playoff run - has a legit compilation of videos of him getting absolutely WRECKED by dunkers. (With Onyx as the soundtrack, no less.) For a guard, it's a really astounding level of production. I think it's part of his overanxious defending habits and his dependancy on drawing charges (note he only jumps to try to block Dwayne Collins) that makes it seem like a good idea to try and get in the way of people about to viciously hammer on his head. 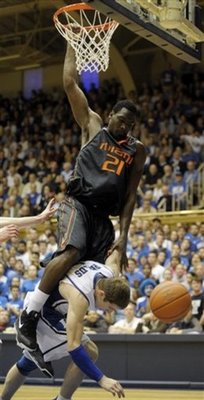