Share All sharing options for: Gettin Familiar With: Purdue

This post is about two things: Purdue Boilermakers football and... romance. 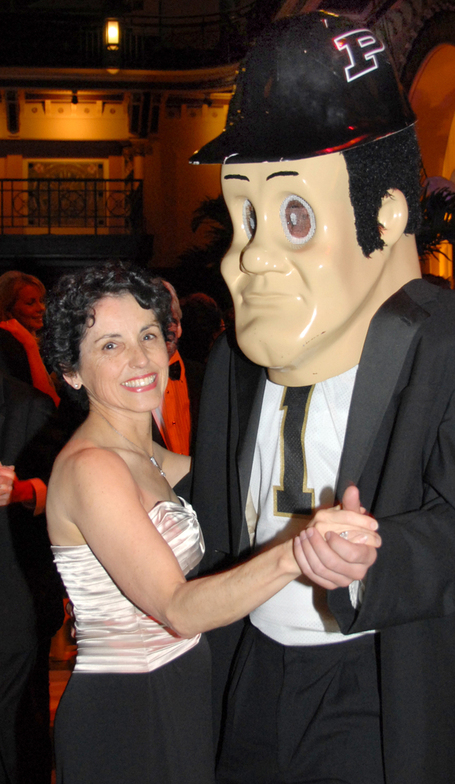 She stared deep into his limpid, pupil-less eyes, and immediately knew that she could never be with another man wearing a mask of a really weird looking, possibly soulless engineer with a helmet again

On the season: The Boilers got off to an alright start, I guess, beating Toledo 52-31, but since then, it's been three coulda, shoulda, woulda, but, uh, didn't games for Purdue. First came a 38-36 loss to Oregon - yes that Oregon, who just whomped Cal - that came due to a missed PAT and a last-second two-point conversion that was caught just a few inches outside of the end zone. Then came an embarrassing loss at home to Northern Illinois, who, quite frankly, dominated Purdue. Then came a heartbreaking 24-21 loss to Notre Dame, where Danny Hope majorly aided Notre Dame's game-winning touchdown drive by calling a timeout in the waning seconds, a decision inspired probably by playing Madden on three minute quarters and letting your opponent score easily with like 40 seconds left so you have the ball with time to score. Anyway, Purdue is a few plays away from being 3-1 with two wins over signature teams, but then again by that logic, NU is a few plays away from being 4-0 and almost ranked. So all you need to know is that they're 1-3.

Us and them: Purdue is 49-26-1 against us all-time. That all-time record reminds me of another set of numbers...

Oh yeah. We beat them 48-26 last year. The main thing I remember from this game is that we were lifting this one guy every point we scored, but after lifting him 41 times, it was really hard to lift him 48 times a few minutes later. I also remember collecting disembodied Pat Fitzgerald heads-on-sticks, but that's neither here nor there.

Unfortunately, there's been a surprising amount of overturn from last year at Purdue - Curtis Painter, who lobbed three picks, is gone, and Kory Sheets, who really dominated us on the ground running for 168 yards and two touchdowns, is also gone. And in case you ain't heard, Joe Tiller, last year's head coach, has been replaced with Danny Hope, the fourth team we've played with a new head coach. Purdue also has new offensive and defensive coordinators, making them the fourth team we've played replacing a head coach and both coordinators, and the fifth with at least one new coordinator. I hope you guys hate continuity.

Offense: Ralph Bolden is sort of good at running back. He's averaging 6.2 - six, point, two - yards-per-carry, and 488 yards rushing in four games.. Yeah, some of that is skewed by a 234 yard game against Toledo, but, that's still a little bit less than half his yardage on the year. Even in his lowest total on the year - a 12-carry, 67-yard performance against Northern Illinois - he was still averaging those 5.3 yards-per-carry and had 62 yards receiving. The guys good. And he'll touch the ball 20 times this game, so, long story short, panic.

Joey Elliott is a fifth-year senior starting for the first time, and he's not so hot, but he's not really what we need to worry about. He threw three picks against Toledo, and although he redeemed himself with a three td, one pick performance against Notre Dame, I don't know, he's really just not a great passer if you watch him just a little bit. He'll hit short open guys, and he'll hit them well, but he's not going to be Purdue's focal point by any stretch. Keith Smith accounts for 358 receiving yards, about twice as many as anybody else on the team, but I don't think he'll trouble Sherrick McManis much.

Defense: Purdue has a Northwestern style defense, by which I mean "they couldn't tackle your grandmother if she was walking at a brisk enough pace." This isn't something I've discovered because I'm a football analyst, or because I'm a Purdue fan who has pored over game tape, I just watched a few highlight reels on youtube, all of which are less than a minute, and you can see that a lot of the medium-to-huge size plays Purdue gives up are because they really just don't wrap people up. It's important to note that Northern Illinois ran for 280 yards against Purdue.

In terms of passing defense, they do average a pick a game, but, yeah, Toledo threw for 423 yards against them, and I understand they're a pass-heavy offense, but, yeah, that's not going to cut it.

Special Teams: I don't generally cover special teams in these posts, but Purdue has a fella named Carson Wiggs who freakin' nailed a 59-yarder against Toledo. Yeah, 59. That's almost 60. Which is almost 63. Which is the longest field goal in NFL history.

Then again, he also missed an extra point against Oregon. This sort of inconsistency is known amongst those in the kicking world as a case of "the Demoses."

Transitive property logic that makes me confident we'll beat this team by a lot:

Normally I do this using lopsided scores from the previous year.. but we beat this team by 22 last year. No transitive property logic needed, that was sort of a beatdown.

So, that's that. A day late and a lot of football analysis short, but, deal with it, it's what I got. See you some other time, people.