Share All sharing options for: Name of the Week: Michigan State Edition

So, folks, I told you that I was looking into getting a plaque for the winner of the 2009 Name of the Year Competition. SBNation may not be making me rich, but, folks, I'd be lying to you if I said I wasn't willing to spend out of pocket to make this the best Northwestern-themed great name finding competition in the world, and folks, I went that extra mile and ponied up for a plaque: 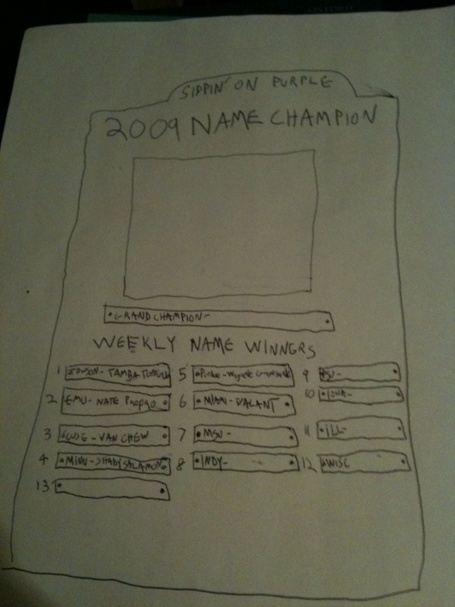 By the way, when I said "ponied up for", I meant "I drew one on the back of an old sunday night dinner flyer I took down from my dorm hallway while putting up new ones last week because I'm too cheap to have a printer, and therefore, printer paper, in my room, then, took a picture of that on my iPhone." Because that's what I did.

Anyway, on to the names.

This week's honorable mentions: NT Michael Jordan, OG Hugh Stangeland, DT Dan France, S Roderick Jenrette, NT double-first-namer Antonio Jeremiah, and OT J'Michael Deane. (you're going to have to do more than just add a "J'" to your normal name to impress me nowadays. You have to do something truly spectacular, like P'Allen Stinnett, to pass the test.)

#60, Micajah Reynolds: My only advice to Micajah, a freshman OG, is that should same-sex marriage become legal, he shouldn't consider getting married to teammate Jared McGaha. Because then his name would be Micajah McGaha.

Micajah is redshirting and won't see the field Saturday.

#23, Jairus Jones: You're probably thinking "Jairus" is some silly made-up name, and thinking, "ha! what a silly made up name!" Nah. Denicos is a made up first-name. Jairus, on the other hand, is the name of a preposterously obscure biblical character I didn't know existed until I just looked him up. I wholeheartedly support the giving of obscure biblical names to children. Too often, biblical naming is restricted to your normal biblical names like "Peter" or "Jacob." If you're lucky, you'll see an "Abraham" or a "Moses" or a "Thaddeus." But I'm all for people giving their kids more obscure biblical names like "Mahalalel", "Habakkuk", or, in this case, "Jairus." So good for you, Jairus' parents. Interestingly, same deal with Micajah, also named after an obscure biblical character, but, he really got in because his name is cool. Jairus needed that extra biblical bump.

Jairus, like Micajah, is redshirting, unlike Jairus, he's a safety.

#49, TyQuan Hammock: TyQuan in and of itself isn't enough to impress me, but when you combine it with something as comfortable and relaxing as a hammock, I'm in. Actually, hammocks aren't really that comfortable, to be honest. That's what makes TyQuan such a badass linebacker. You can lie on him, and it won't be as comfortable as you think it should be. WHAT NOW?

He's also a freshman who is currently redshirting. Way to recruit on name.

#30, Brynden Trawick: Brynden and Trawick are not actual names. I'm pretty sure they are monsters from Beowulf, though. Act like Brynden Trawick doesn't sound like something you'd call an old english swamp monster. Act like it.

Brynden is a redshirt freshman linebacker who is on the three-deep at the weak-side position, and has a few tackles in three games this year. It also should be noted that for in the first time in the history of the Name of the Week, SBNation's AP photo search thing has turned up a photo of a nominee, so here's an image of Brynden Trawick. 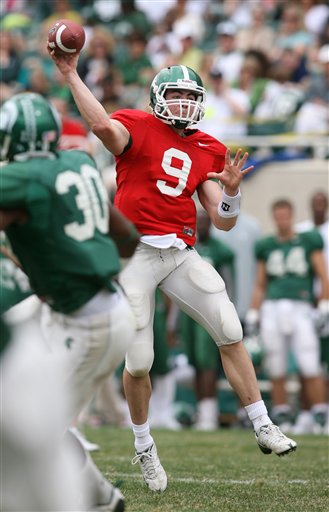 and my nominee for the winner... (note NU is 0-2 in games where the masses voted for someone besides the person I picked to be name of the week and 4-0 times they didn't)...

#52, Denzel Drone: Apparently MSU took Denzel Washington, star of such films as Inside Man, American Gangster, and my personal favorite film of all-time (you think I'm joking, but I'm not) He Got Game, removed his soul, and set him loose as a brainless killing machine. Because this Denzel Drone they have is a defensive end. Be worried, people.

Denzel is redshirting. Like you didn't see that coming.

Anyways, I could understand if you guys don't like Denzel more than the other four. But remember, you're voting with NU's chances at victory in the balance. Be careful, be very, very careful.