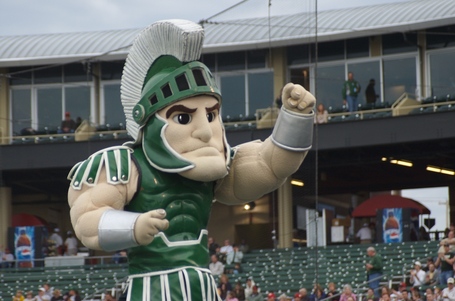 That Leonidas fella probly woulda offed himself had he known his lasting legacy was going to be college students from Michigan yelling "OOOH! OOOH! OOOH!" before third downs and other critical junctures in football games.

On the season: Sparty got off to a pretty bad start. After beating Montana State, they dropped a game via last-second field goal to a Central Michigan MAC attack, then lost by three to Notre Dame in a back-and-forth one, then lost by eight to Wisconsin. All told, they had outscored their opponents by 31 points, but were 1-3. But an OT win vs. Michigan and a rightful win over the depression squad that is Illinois has them at 3-3 and streaking.

Us and them: Surprisingly, this has been a decent rivalry in recent years, if by "rivalry" you mean "they've played absurdly close games." Of course, MSU dominates us all-time, leading the series 33-16, but we've split the last 14 7-7. In 2006, MSU had the biggest comeback in division I-A history, pulling out the 38-35 win after we went up 35-0, and you've probably heard about this and have probably wept about it at least thrice. The next year, CJ Bachér went all (pretends to be LL Cool J, holds hands up to mouth to project) CJ BACHER!!!!! on the Spartans, throwing for 520 yards and five touchdowns, in a 48-41 OT win for the Cats. Last year, a 5-0 NU team had their early season optimism crushed by No. 23 MSU, who ended any Rose Bowl hopes early be dishing us a 37-20 loss.

Offense: If you've got any spare working body parts you're not using, MSU's skill position players could use 'em: Kirk Cousins, who started the first five games of the season, suffered an ankle injury, giving way to junior Keith Nichol, who promptly got injured in week 6. Currently, the two are both listed as starters with a big ol' OR slapped in between them on the depth chart, but it appears Cousins will get the start. He hasn't been half-bad - his worst game on the year was probably a 15-21 two-pick no-td performance against Michigan, and they got the W. Meanwhile, Nichol, who has played in every game in some duty, was 13-25 with a pick against Illinois. Cousins is probably in the top half of QB's in the Big Ten, so I'm hoping that ankle is a lil bit rawer than they're letting on.

Meanwhile, Glenn Winston - MSU's second-leading rusher, a sophomore who was splitting carries after spending 180 days this offseason in the clink - is out for the season, meaning MSU's running rotation in the wake of Javon Ringer is questionable. Freshman Larry Caper has been a vision - 4.6 yards per carry, over 60 carries, including 95 yards rushing on 16 last game against Illinois - but right now, he's their only suitable running back. Right now their second stringer is listed as Caulton Ray, who has 40 carries and 156 yards, but, the point be, that there be some depth issues. In a Northwestern-y twist, none of their running backs or QB's had ever started before this year, and now they have two injured QB's and an injured RB. We'll see what happens.

I'd be worried about the deep ball to MSU wideouts: Six guys have caught passes for more than 30 yards, 8 for more than 25, and seven guys have touchdowns. So there's a lot of people we have to guard. The Spartans' No. 1 target is Blair White, who leads the team in receptions, yards, and touchdowns with 33, 449, and four.

Defense: MSU has a nasty linebacker corps: Junior Greg Jones at the MLB spot is a certifiable beast, with twice as many tackles as anybody else on the team (71, to be exact) 3 sacks, 3 qb hurries, and 6.5 tackles for loss. I would not pick a fight with him. They also have Eric Gordon (relation?) who follows Jones for most tackles, and Brandon Denson.

Cornerback Chris L. Rucker is somebody to watch out for, as opposed to third-string tight end Chris D. Rucker, who isn't. Rucker (the good one) is a pretty solid lockdown corner but only has one pick on the year, but then again, neither does anybody else on the team.

Although our goal line offense has been pretty gosh-darned inept, I ain't worried: the Spartans have allowed points on 16 of 17 red zone tries, including 11 td's, the only exception being Tate Forcier's, err, forced pass into coverage in overtime of the Michigan game.

If we didn't think our offense needed to be as passing-oriented as possible before this week, well, the Spartans have a mediocre pass defense - 60% pass completion, 13 TD's and only four picks, 226.7 yards through the air per-game - but have an absolutely stout run d: only 3.0 yards per play and only three rushing touchdowns allowed on the year. Let's air that bad boy out, folks.

Anyways. That's all I got for now, but keep peekin.