The Olympics: Not Coming to Ryan Field

Share All sharing options for: The Olympics: Not Coming to Ryan Field

As you mighta heard, the Olympics will be held in Rio De Janeiro in 2016, and not, uh, Chicago.

Sadly, this means that the modern pentathlon will not be held at Ryan Field, Welsh-Ryan Arena, and SPAC's very own Norris Aquatics Center, as planned by the Chicago 2016 committee. But we'll always have this computer animation of Ryan Field with a bunch of banners on it: 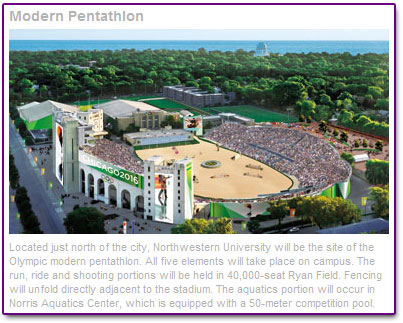 What probably decided the IOC's decision was, in fact, our low attendance at the Minnesota game - because if Evanstonians can't fill up a stadium for a good college football game, who the hell is going to show up for a contrived event featuring running, shooting, fencing, horseback riding, and swimming? Also offputting, the fact that hot dogs were scheduled to run out by the end of the horseback riding competition.

Instead, the modern pentathlon will be held in Rio's as-of-yet-unbuilt Deodoro Modern Pentathlon Park, which will seat 15,000 and cost 10.1 million dollars to build, and will probably be way, way, way nicer than our little oval filled with metal bleachers.

That being said, as someone who was 14 when New York was a potential Olympic candidate, and was very naive and excited for the Olympics to be held in my hometown, this is probably good for Chicago. Not to get all pontificatin' on you punks, but the hundreds of millions of dollars that would be spent building stadiums to be used for two weeks and never again can be better used for things like improving Chicago's public schools or lowering the city's murder rate to only twice that of New York, or, doing both, and making sure no schoolkids are getting murdered which is actually a problem this city has. This city has bigger issues, and at the end of the day, Chicago is still a great city regardless of whether or not they have a two-week long festival in 2016. New York, in my homer opinion, is still the greatest city in the world, regardless of whether or not we won the 2012 bid, and Atlanta is still a minor city with major issues after having won in 1996. You'll get over it, Chicagoans.