Share All sharing options for: Northwestern vs. Indiana: Now with Bowl Implications!

That should say "now with major bowl implications."

Actually, it should say "now with major implications for minor bowls."

Well, they were both a little bit right, but primarily wrong. What I mean is, both of these teams are pretty bad. NU seems to be missing a different facet of their game every week, and Indiana couldn't defend an armless toddler in a game of pickup basketball. But on the other hand, both these teams are 4-3, a win away from .500 in-conference, and would be teeter-tottering on the edge of bowldom if they won. So in short, both these teams are terrible, but this is a big game. Lezz preview it.

Oh, and check out The Crimson Quarry. Do it. Or else. 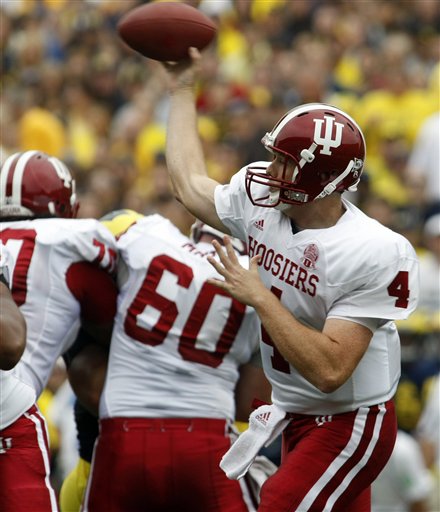 I'd take Indiana quarterback Ben Chappell in a arm-muscle vein-off against most people, except maybe Wolverine from the Wolverine movie.

When we got the ball: If there's been one constant in NU's season thus far, it's our lack of a run game. I'd even take the Hoosiers anemic run defense against our backfield. Don't run. Pass. Luckily, Pat Fitzgerald appears to be committed to this revolutionary gameplan. You know, I didn't even notice Jacob Schmidt was out last week? I mean, maybe I did, but it's just so irrelevant at this point who we have available at running back. We shouldn't be running.

So the onus, once again, is on Mike Kafka. We best be double-teaming Jammie Kirlew, because knowing this year's o-line, one guy ain't gonna cut it, and I'd like to see Kafka recognize when he's a few seconds away from getting sacked by that huge dude, tucking it away, and going at the soft weak area of that Indiana defense, which as noted, ain't too great outsidea that Kirlew fella. He's got the speed, and if he uses it correctly, I'd be down for a mini-Minnesota 08.

Oh, and DON'T FUMBLE. It's comical how different a game that big l last week is if not for two mental lapses.

When they got the ball: I'll be real, I like what I've seen from this defensive unit in the past few weeks. Even though we let MSU drop 24 last week, I'm not disappointed with the showing, and Indiana is a considerably worse team offensively, and hopefully we won't be giving them fumbles on our own 22 this week.

The key is covering Tandon Doss. I think we all trust Sherrick McManis right now, even after the Blair Whitestravaganza last week, so, let's see him get to it.

Defense: Not to be obvious, but Jared Carpenter. Last week, we saw Brian Peters step in at a safety spot and replace Brendan Smith, all things told, quite well, and was one of the best players on the defense. Now, Brad Phillips is questionable, and I'm not going to hold Carpenter to Peters' standard, because even I wasn't expecting that. But most likely, Carpenter will get his first start this week, and they'll be passing, and he'll have to make big plays, even though essentially none of us know anything about him. Tell us something, Jared.

Pick in a mascot fight to the death: Toughie. The wildcat has claws and paws, but the hoosier is about four times his size. If the wildcat can dig in deep, prevent himself from getting kicked or punched too hard, and climb up his opponent for a potentially winning headshot, he should have an easy win. Game, Northwestern. (mascot death fight records: NU, 3-5, Indiana, 2-6.)

Northwestern, 34, Indiana, 27. Northwestern's not much better, but they're better. NU has had games in which they've been great offensively, games when they've been great defensively, but none with both, and it's not happening this week. But I don't see Mike Kafka not wreaking havoc on Indiana's defense, and we might have ourselves a shootout.

Anyway, disagree or agree in the comments, and, if you ain't at the game tomorrow, a) what's wrong with you, you sick bastard and b) stop by in the comments section. I won't be commenting along, probably, but do it to it anyway.