Share All sharing options for: Gettin' Familiar With: Penn State.

Alternate title: Gettin' Familiar With: The people about to murder us and ransack our houses and probably also hurt our friends. 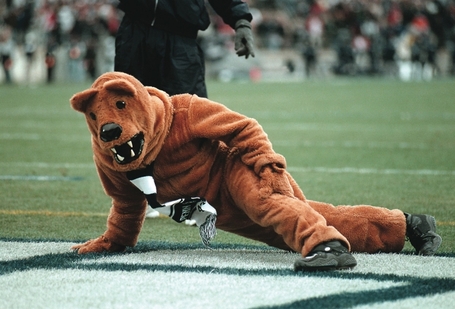 At some point in your life, you've probably wondered, "what exactly a nittany lion, anyway?" Well, it's like a regular lion, but it doesn't have a mane, enjoys thrusting, and wears boots.

So far this year: The only blemish on PSU's schedule is a 21-10 loss to Iowa in week four, other than that, they've been dominant. In their seven wins, they're outscoring their opponents 232-50, including a current three-week stretch in which they've beaten Eastern Illinois 52-3, Minnesota 20-0, and Michigan 35-10. They've only allowed double digits three times: Iowa, Michigan, and a 35-17 win over Illinois, while putting up at least 20 every game except Iowa. Yup.

Us and them: Our history with PSU is short, and sweet, well, for them. We're 3-9 against the team that made the Big Ten the Big Eleven. As you've probably noticed, we haven't played them in three years. The last meeting was a 33-7 beatdown in Happy Valley that was Pat Fitzgerald's first Big Ten game, and featured a memorable performance by rookie QB, uh, Andrew Brewer in which he went 14-30 for 157 yards and a pick, as well as leading the team with 41 rushing yards in his first start. Brew didn't remain our QB for much longer, as evidenced by the fact that he had 8 catches for 135 yards and a touchdown last week. Also in the game, a freshman QB named Daryll Clark took his first Big Ten snaps, going 1-2 for seven yards. He's still around at PSU.

Offense: Daryll Clark is a monster of some sort. He's a dual-threat quarterback, but with an arm that makes you kind of forget that, as he's got 1884 yards passing with 17 TD's and only seven picks. He's probably the best offensive player in the Big Ten this year, and he could kill any given player on Northwestern's defense in 13 different ways at any given point in the course of play. And with interchangeable wide receiving droids Graham Zug (KNEEL BEFORE ZUG), Derek Moye, Andrew Quarless and Chaz Powell, he has targets. He leads the Big Ten in passer efficiency, and because Penn State also has a great offensive line, and he's a great runner, he has been sacked less than any other Big Ten quarterback. Oh, and they also have the highest third-down conversion percentage.

Penn State's running game often goes unheralded, because Daryll Clark could probably throw a football hard enough to disembowel you while running 15 miles an hour in the opposite direction, but it's pretty good, in part thanks to that o-line, in part because they have great running backs: Evan Royster, who you may remember from his 1236 yards on 6.3 per carry last season, is back at it, with 741 yards on 5.7 per carry. He's had four games of over 100 yards, and four games of under 90 yards. If you enjoy watching safeties make tackles on running backs, saturday's your game. PSU averages 5.0 yards per carry as a team, which puts them 15th in the nation.

So, yeah, be worried.

PSU leads the Big Ten in passing defense (160 yards per game) rushing defense (79.8 yards per game) total defense (do the math) scoring defense (8.9 points per game) opponents third-down conversion percentage (the one they lead offensively, remember that) and sacks (26, putting them fourth in the nation, with DE Jack Crawford and DT Jared Odrick leading the way with 5.5 and 5, respectively.) Yeah.

Basically, don't get too excited for Saturday.

Anyway, fear. I'll get at y'all tomorrow.