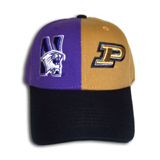 Anybody own this hat?

Well, if you do, you're banned forever.

Quite frankly, I've been moderately disappointed with the commenting up in here, because I had a decent amount of comments on the old site - you know who you are, people - and I assumed that when I moved over here, the comments would keep going, but not so much. But today, let's change that. NU is on the road, and, as always, the comments you write in the game thread will appear in real time, and I, and hopefully other people, will be here to say other comments in return.
So, if you're one of the people who commented in the two game threads I had on the old site (where you at, Patrick!), or more likely, if you're not, please, stop by. I'll bake you cookies or something. Because it's been mathematically proven that comments=wins. (my evidence: 14 comments vs. EMU, 9 vs. Syracuse, 3 vs. Minnesota. Pretty indisputable.)
So please, comment along. I'll be there.

So here's another link to Hammer and Rails - I hadn't read them before this week, and, to be honest, I'm impressed, mainly by the Keanu Reeves post and the dead hooker scale on the sidebar - check them out if you want a Purdue spin on stuff.