Share All sharing options for: Oh, THEY'RE the 0-5 team

Once, Northwestern was the team that lost games for years in a row, but that doesn't mean we'll feel bad about beating somebody else. 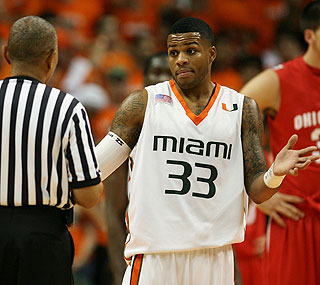 This is what happens when you google image search "Miami Ohio basketball". Just pretend Jack McClinton's left arm has a tattoo that says "OF" and this will make sense.

When we got the ball: Miami has a pretty bad rush defense, and for the first time in a long time, we have Stephen Simmons. I'd like to see us go back to our first few weeks game plan of trying to figure out how to run the ball, because we can afford to try it out against a team we're better than.

I'm not saying "don't let Kafka pass", though. In fact, I'd like to see Kafka pass, but, none of the short easy stuff which he's been completing with great ease even against Big Ten secondaries. We know we got that. I'd like to see him throwing deep, because he hasn't shown he can yet, outside of one pass to Jeremy Ebert against Minnesota last year. Air it out.

You see, yesterday, I was playing pickup ball. I'm 6'2, but most of my game is reliant on a shaky mid-range and the reverse layup, because most pickup ball defenders don't really guard you baseline. I have the height to play in the post, but have literally no moves. But yesterday, I was matched up against a scrawny 5'6 or so kid. I could've just bullied over him and gotten my fair share of uncontested two footers, and I did this a few times, but I realized this was no fun. Instead, I used the opportunity to use some post moves I don't try against defenders who aren't mismatches against me - I busted out the dream shake and spin baseline, I busted out a turnaround fadeaway, and a variety of ugly hook shots. In doing so, I realized that the ugly hook shots, although they're ugly, are actually something I can rely on in the post against people that are actually my size if I don't telegraph it too much, and that I can pretty reliably bank it in from the right block, whereas the dream shake, while it looked good when Hakeem did it, is really likely to see me lose the ball. I realized what worked and what didn't, and my team won both games easily. (I also hit three threes in one game and two in the other, but that's less because I'm a good shooter than it is because I jack up a crapload of shots.)

If Mike does his 5-8 yard in routes that he does every other goddamn week against a team we should romp over like Miami, that's the equivalent of matching up against that 5'6 kid and shooting uncontested one footers because you can and you'll win the game. We have to take this opportunity of getting real game reps against a weak opponent to let Kafka test out his arm and see if he actually can hit Brewer on a go route like he did in the spring game and against Syracuse, or maybe if Sidney Stewart or some other player is a better deep ball receiver than Brew. We have a chance to essentially practice in an actual game. Take advantage of it, Coach McCall.

Defense: Last week we saw our defense unit the way we'd like to see them. They got after the ball-carrier, whacked him, and got him to lose the ball a lot of the time. For about 40 minutes, our defense absolutely dominated Purdue's offense.

Let's pick up where we left off. Our games against Towson and Eastern Michigan were notable for how our defense sleepwalked through them and still won quite handily, so, let's not do that. I know this isn't insightful at all, but, hey, this team doesn't really have much of anything going for them.

People I'm watching: Corbin Bryant, Marshall Thomas, Niko Mafuli, and Adam Hahn: These are the four defensive tackles in our lineup. Before last week, they'd done a pretty bad job all year long, letting the first four teams we'd played essentially run over us, even ones with weak rushing attacks. This week, they face off against a very weak Miami (OH) rushing offense, one that they barely use, opting to pass about 40-50 times a game.

But when they do run, I expect to see these four - Bryant and Thomas took the majority of the snaps until Mafuli and Hahn played a lot and very well last week - do big things. I'm looking for Miami to have a yards-per-carry in the 3.5 or under range, or else we're dealing with the same defensive issues we saw in the first four games.

Pick in a mascot fight to the death: A lot like our matchup against the EMU Eagles, we have a classic bird-of-prey versus small land mammal fight. And no matter how ferocious that small land mammal is, it has none of the tactical advantages that a bird that can fly really fast and has big talons has. Game, Miami. (Wildcats death fight record: 2-4. Notice that so far, the real life Wildcats are 0-2 in games I've said their mascot counterpart would win, and 3-0 in matches I said the mascot would lose. I'm looking for this to hold true again this week.)

Northwestern, 38, Miami, 10. Yeah, I like us against the ridiculously large spread. Miami hardly deserves being being +18 - they've lost by more than 18 in all but one game. Then again, I've been awful at predicting actual scores, and have picked NU in all six of their games this season, so, don't listen to me.

This is the last post til tomorrow's game thread, which I expect to be relatively laid-back, considering nobody will be near a computer, because ANY NORTHWESTERN FAN SHOULD BE AT RYAN FIELD TOMORROW IF THEY ARE WITHIN A REASONABLE DISTANCE OF THE STADIUM. People are talking about this being one of the lowest attended games in NU history, considering we only drew 22,000 vs. Minnesota, so, please, go, if for nothing else, so that it's less depressing looking out from what will probably be a very full student section. I might comment via iPhone if enough people are commenting, so, stop by if you live somewhere outside of a two-hour radius of Evanston, but otherwise, drop by.