Share All sharing options for: Beggars Can Be Choosers: Champs Sports Bowl

Big Ten Season is over, but errbody else is still playing and whatnot. So with our eyes on December and plane tickets, here's a look at who we might play, why we want to play them, and all that good stuff.

So, if the world keeps spinning the way it should, Northwestern is going to Orlando to play in the Champs Sports Bowl. (However, I'll preview our other game opponents eventually. Don't you worry, people.)

So y'all are all like, hey, I wonder what teams could potentially be the #4 team from the ACC? But luckily for you fools, I got widgets on my side:

Admittedly, I don't know much about ACC football this season, although people in the know assure me that it does, in fact, exist. I don't watch their games, I don't know their players, and I don't read their respective SBNation blogs. (Yet. But that's what the next 7 or 8 weeks are for.) So here's my opportunity to take a quick peek at all these teams and figure out who I want to play.

So right now, Georgia Tech is 10-1, and then there's four 8-3 teams and a 7-4 team. As far as I can tell (and I can tell very little), despite being 8-3, Clemson is guaranteed to be either the #1 or #2 pick in the conference by virtue of the fact that they've already booked a spot in the ACC Championship game, so, we don't have to worry about playing the Tigers. That leaves Virginia Tech, Miami, North Carolina, and Boston College as people we could play in the Champs Sports Bowl, should we be selected. So let's take a look at them there teams, in that random order. 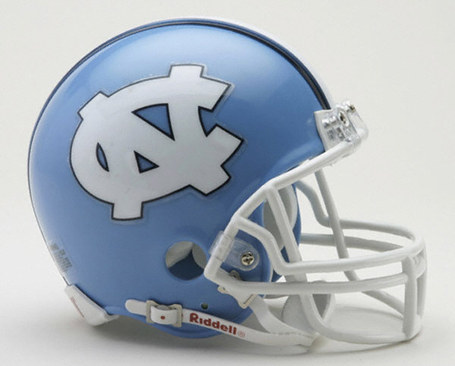 Season thus far: Looking at their team stats, there's a lot of lacklusterness going on, but after dropping three in four weeks, including losses to mediocre at best Virginia and Florida State, the Tar Heels got it going. They've won four straight, including W's @ then No. 13 Virginia Tech and against then No. 14 Miami. So things turned around fast.

Pros to playing them: North Carolina's second leading export behind tobacco is post-basketball season college football apathy, so you can count on there being as much if not more purple than powder blue in Orlando if this goes down.

Quite frankly, I always like North Carolina, regardless of the sport. I contemplated applying there. It's probably because it's ovewhelmingly easy to dislike Duke, and the enemy of your enemy is your friend.

Big fans of raising up.

Cons: They're disturbingly hot, pause. It's way better to play a team that came into the year with high expectations and started to fizzle than it is a team that just won five straight and people are pumped for the bowl game.

We're 1-1 in the past three years against teams from North Carolina. Oh, and they were both Duke, so we shoulda been 2-0.

Also, not a slight against NC, since they probably have a better team historically than we do, but what this program needs is a bowl victory against a school that people associate with football. If we UNC, people will see that matchup and think "awww, it's sorta cute that those two schools are in bowl games! I hope they both win!" On the other hand, if we play a school people associate with football, people look at that matchup and say, "damn, NU got into a bowl game? They're going to get smoked by (insert school name)!" (See our two-touchdown spread last year against Missouri.) And then when we win, people will actually notice, and that's what we want. Even if NC is better than those other schools, we want to play someone with football tradition. Just sayin'.

Likelihood of playing them: Mad high: CBS, Stuart Mandel of Sports Illustrated, the College Football Network, and Hail to Purple have us facing the Tar Heels.

Three other teams and other stuff, after the jump! 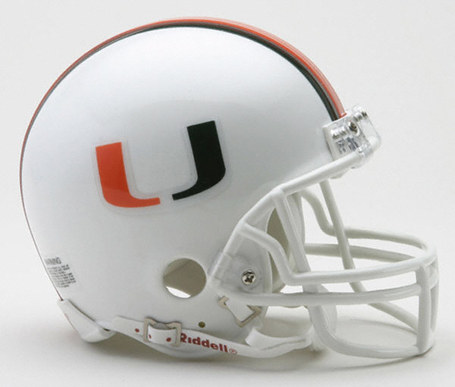 Left on the docket: South Florida, at 3:30 on ABC. I'm not ready to put this away as a win for the Hurricanes, as the Bulls have already beaten ranked FSU and West Virginia squads, so, they can play. (They also actually beat Syracuse, so, that's a step up from us.)

Season thus far: Jacory Harris and co have put together a decent year. They started out by beating No. 18 FSU and No. 11 Georgia Tech (the only loss for the Ramblin Wrecks so far this year), then after losing to Virginia Tech, they went out and beat No. 8 Oklahoma. Their only losses on the season come to decent teams - VT, UNC, and Clemson.

Pros: To follow up on that last thing I said, the U is one of those schools with one of those big names that looks good when you beat them.

Nobody likes traveling north for a bowl game.

As long as we're posting rap songs from my youth as pros for teams, it should be noted that Miami is a city where the heat is on and where we party all night until the break of dawn.

NU currently 1-0 on the season against teams named "Miami".

Cons: Playing Miami wouldn't be good for my lifelong fear of getting mutted by the whole crew. (I hope that song made up for linking to a rap song with no dirty words in it. Thanks, G-Reg!)

NU hasn't really beaten a team with a grade-A offense like the one the Canes got so far this year. Jacory could do unspeakable things to our secondary, and they have three guys with 75+ carries who average more than 5 yards per carry. Those are numbers, fellas.

Likelihood of playing them: Decent. Mark Schlabach has us playing them, and if every team listed in this preview won next week, Miami would be the fourth selection on the ladder, so, that's damn likely. 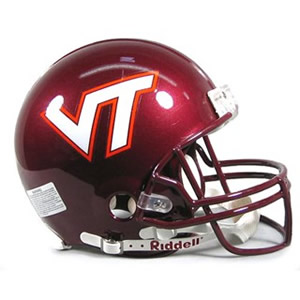 Left on the docket: Virginia, 3:30 on ABC. (That Miami game up there is supposedly also on ABC, so, chances are at least one of those is a lie in the area you live.) The Commonwealth Cup is one of the least interesting football rivalries in the world, especially because I just had to look up what the name of the rivalry is, and the Hokies should romp.

Season thus far: A loss to now No. 2 Alabama in the season opener and now No. 7 Georgia Tech is nothing to be ashamed of, and that loss to UNC sort of is, though. All things told, not a poor season, including wins over Nebraska and a demolition of then No. 9 Miami. Since dropping two straight to GT and NC, the Hokies are outscoring opponents 90-22.

Pros: Still not sure what a Hokie is. Y'all know how I feel about confusing mascots.

Pre-dog fighting, I loved me some Vick brothers. I still play as Mike in Madden, and Marcus was just the greatest person ever.

Cons: Virginia Tech is the best team we could theoretically play in this bowl. And that's bad. Remember that "grade-A offense" thing I said about Miami? Well, Tyrod Taylor has ten more touchdowns than interceptions - 10! - and can run, too, and Ryan Williams might have 1500 yards rushing on the year by the time we play them, so, that's bad.

It's not a good sign for NU's chances that I can name two of Virginia Tech's ex-QB's off the top of my head, even if they are brothers. The only reason I can do that for any other team we'd theoretically play against is because Vinny Testaverde was the Jets QB for like 40 years and I saw Brock Berlin's name in a sporcle quiz earlier today.

Likelihood of playing them: Relatively low. The only plausible scenario in which Virginia Tech wouldn't be the third ACC team selected would be if they lost this week to Virginia, and that in and of itself is implausible. But theoretically, if they lost, allowing, say, Miami to be third, and UNC lost as well, they'd be fourth in the standings. 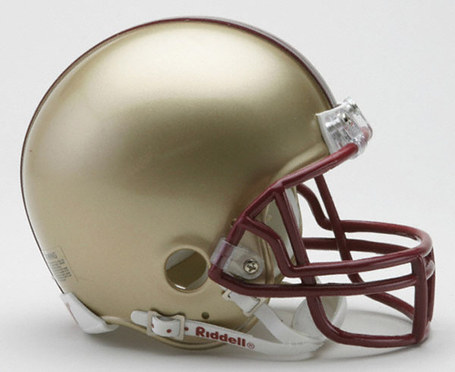 Season thus far: Playing in the easy-peasy ACC Atlantic, the Eagles had only one game against a ranked opponent this year, against No. 5 Virginia Tech, and they lost it. By 34. The Eagles season took a huge hit last week when they lost to NC, who, as you saw, is the team most likely to play us in the Champs Sports, while BC would need a lot to go right for them to make it in.

Oh, and they lost to the Team from South Bend, so, they're hella mediocre. Although I'll give them a pass there on the whole "same helmet" thing that I'm sure resulted in like seven picks.

Pros: Playing BC would give me another opportunity to unleash my undying hatred on the Boston sports world. Because Tom Brady and the Celtics aren't enough to tide me over until pitchers and catchers report, and I sure as hell am not picking up hockey just to hate the Bruins.

People like to play up the whole "academic-focused private schools in metropolitan areas that prefer pro sports" connection between us in BC, so, there's that. (Never mind that UNC's a better school. Just go with it.)

Cons: One game against the Wildcats would probably be enough for the Eagles to steal all of our gameplans so they could easily defeat us when we face them in 2011 and 2012.

Likelihood of playing them: Low. They'd have to win and at least two of the other teams would have to lose for them to be in the fourth selection spot without jumping anybody.

So, there's the teams we could play in the Champs Sports Bowl. Now, I'ma rank each of them in a few metrics to decide which team I'd most like to play if we do get selected to this bowl. It should be noted that all my rankings are off the top of my head, probably incorrect, so feel free to disagree.

Mascot: Not that important, but still.

Program Prestige: Who does it look the coolest when we play against/beat?

Traveling: Who's likely to bring the least people, and therefore, giving NU the best chance of having a semi-home field advantage? (then again, you could argue that we'd want the other team to bring as many fans as possible so it looks like NU travels well for future bowls. But screw that.)

Hateability: How easily do they inspire hatred? Arguably the most important factor.

Winnability: The actual most important factor. YOU PLAY TO WIN THE GAME.

So the winner of the Sippin' on Purple Champs Sports Bowl Team I'd Most Like To Play Award (the prestigious SOPCSBTIMLTPA, as they call it in the streets) goes to the #17 Miami Hurricanes. 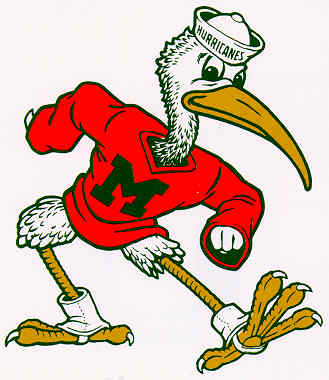