Share All sharing options for: Beggars Can Be Choosers: Tigers, two different kinds

So, last week I pumped out this post about teams from the ACC Northwestern could hypothetically play in the Champs Sports Bowl.

Well, folks, I was a bit less than comprehensive: I highlighted four teams: UNC, Miami, Virginia Tech, and Boston College. I shoulda highlighted five: with a loss to South Carolina this week, the ACC Championship game-bound Clemson Tigers are also a highly likely choice for the Cats, so, my bad on that one.

I'll also preview another group of Tigers who we could play in the surprisingly high chance we go to the Outback Bowl. So check it. 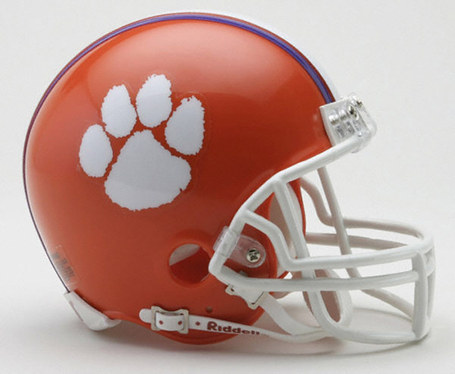 Left on the docket: No. 10 Georgia Tech, in the ACC Championship game, this Saturday at 8. These teams met in week 2, and a No. 15 ranked Yellow Jackets squad got the 30-27 victory. The TIgers were actually down 24-0, but managed to rally, only to lose on a last-minute field goal. Either way, I don't see things going too well for Clemson in this matchup.

Season thus far: Clemson's had a pretty mediocre one for an 8-4 team to be completely honest. They went 1-2 against top-25 opponents, eking out a OT win against Miami, 40-37. The Tigers were lucky to be in the silly weak ACC Atlantic division, which contains only two other bowl eligible teams, 8-4 Boston College and 6-6 FSU, and did their part going 4-1 against these teams, but dropping an embarrassing game to a Maryland team that went on to be 2-10. Still, that 6-2 conference record was good enough to clinch the division with two weeks to go, and the Tigers had a six-game win streak and a No. 18 ranking heading into last week's matchup against South Carolina, but a loss catapulted them back to earth and a potential Champs Sports Bowl bid.

Pros to playing them: Playing another school which uses a purple uniform set would definitely make me feel better about myself and less alone in this big, cold, college football color spectrum we live in today.

Clemson has that double-whammy of looking like a good team because they're a win away from being a BCS team, but also being a squad that's best described as above average.

Cons: NU has a bad habit of playing teams that probably should have gone to better bowls, and if Clemson is in Orlando, they'll be riding a two-game losing streak that's seen them slip from at least second on the SEC bowl ladder to fourth or fifth. We have an even worse habit of losing to those teams in those bowl games when their coach gives them the "let's show those other bowls what they're missing out on" speech, and then they beat us by dozens and dozens of points and we feel the sadness.

Despite all the hatefesting I've put on Clemson in the past few paragraphs, they're offense ain't one to reckon with. CJ Spiller, ACC player of the year, is Clemson's senior running back, and he hasn't averaged less than five yards a carry in any of those four seasons he's been a major member of their running attack, oh, and HE'S THE ALL TIME LEADER FOR MOST CAREER KICKOFF RETURNS FOR TOUCHDOWNS IN NCAA HISTORY. With seven. Judging from our lackluster special teamsage this year, that's not good. Also, for a freshman, Kyle Parker has been a serviceable QB, so it ain't just the Spiller show.

Likelihood of playing them: First off, they best lose next week, because if they win, they'll be guaranteed a BCS bowl berth and that will push all our Big Ten buddies a spot down the ladder, and that could theoretically push us a spot down the ladder and send us back to good ol' San Antonio instead of Orlando. But if they lose, I'd say it's pretty likely we play them, as their 8-5 record would put them fourth in the conference. It's really a question of whether the higher ACC bowls would rather have an 8-5 Clemson, who were just in the conference championship game after winning their division, or a 9-3 Miami, who was a better team all year but lost their one head-to-head matchup. I'd say Clemson's more likely to get picked higher, but time will tell.

Okay, so I was going to put a post up on potential Outback Bowl opponents - I mean, it's a stretch that we get picked, but even the most conservative estimate gives us a 15-20% chance of heading to Tampa, and the Outback Bowl is pretty much every NU fan's dream at this point in time. However, the Outback Bowl went ahead and made my posting job a lot easier by narrowing that whole list of potential opponents to only one: these fellas. 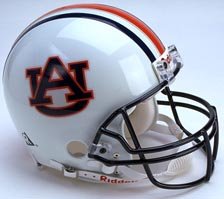 Left on the docket: Well, the Outback Bowl, New Years day, featuring these guys and either Northwestern or Wisconsin. You see, the Outback Bowl picked Auburn today as their SEC representative, and uh, well, Auburn fans are happy (and confused), but everybody else is some combination of mad and confused. I'll explain why.

Season thus far: Auburn is one of ten bowl-eligible SEC teams, and some would say they're the worst. They're 7-5, one of six 7-5 teams in the conference, and have lost to three of those teams, Arkansas, Kentucky, and Georgia. They've lost five of their last seven games, the only wins being against Furman and No. 25 Mississippi, the only ranked opponent the Tigers have faced beaten all year. But the Outback Bowl has somewhere between the 3-5 picks from the SEC, and generally picks a team from the SEC East. So, there's some understandable outcry over them picking a team that might be the tenth best in the conference and comes from the SEC West. The only real positives to their season were the Mississippi and a win over Tennessee, one of those other 7-5 teams, and the one that until today seemed the most likely to go Outback.

Pros to playing them: SO MANY PROS.

They're not that good.

They're from the SEC, the best conference in football. (Let's be real.)

It's a big name school.

It's the highest bowl we could possibly qualify for, and it's on New Year's Day.

Cons: Winning induces joy, and the amount of joy generated by a hypothetical Northwestern bowl victory on New Year's Day against an Auburn team that doesn't belong in a relatively prestigious bowl that, let's face it, we probably don't belong in either, might expose Northwestern fans to a previously incomprehensible and dangerously high amount of joy, causing Northwestern's fan base into turn a bunch of soulless, pleasure-craving hedonists, causing many to forget about their worldly duties and become drug addicts, living from one high to the next, turning Ryan Field into a massive opium den or 47,000 seat outdoors meth lab.

Oh, wait, I meant to say "I can't think of any cons." Sorry, that came out wrong.

In conclusion, I'ma go head and rank the potential teams I've discussed in order from most likely to least likely we're going to play them: