Screw this journalism thing for a few minutes. Allow me to get my unabashed fan on. 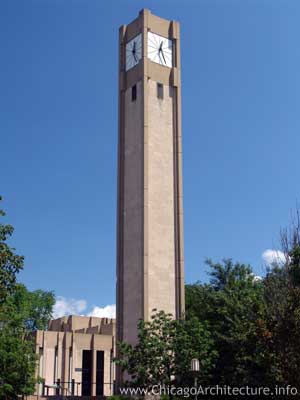 This, as you might know, is Northwestern's very own clock tower. A tourguide told me on a beautiful summer's day a year before I applied to college that at night, the clock faces turned purple when Northwestern sports teams won.

When I arrived on campus, I was lucky enough to go a relatively long time only seeing the clock tower lit up purple. Northwestern was 3-0, then 4-0, then, with a win at Iowa, they were 5-0. Then they had a bye. My formative experiences with that clock tower were all purple-tinged.

I'm not sure what night of the week it was, but I distinctly remember going into Evanston to eat at Joy Yee's with a few friends - and looking up at that tower, and being a little bit put off. Purple isn't always a beautiful color, and white can be nice. But the tower's white isn't pretty. It's ugly. It seems less of a white for white's sake and more of a white because they couldn't think of an actual color to put up there. It's a blank slate, devoid of character, but filled with significance: it represents the football team's defeat, and when I saw it for the first time, I immediately flashed back to what had been a relatively disappointing loss to Michigan State. I immediately decided that I liked the tower's purple face more than its purple counterpart.

Eventually, after three months of a primarily purple clock, Northwestern lost the Alamo Bowl. I got back to campus, and the clock was back to bearing bad news. After having spent five or six days getting the Alamo Bowl out of my blood stream, it just got injected back in. My fellow freshman and I speculated about the clock's colors on BK and Taco Bell runs. Some people heard they changed it for men's basketball games. Wins at ranked opponents and losses against Iowa came and went, but the clock remained white, because we lost the Alamo Bowl. Somebody told me they would turn it purple if the women's lacrosse team won another national championship. They did, and a trip to the BK Lounge revealed that same sullen color. For nine months, the clock tower stayed white, commemorating one loss from a season that saw Northwestern's program make great strides towards relevancy.

All this seems to me to represent Northwestern football's current predicament. Northwestern can win as many games as they want in the season, and they do. NU has won eight games, nine games, ten games, they've won three conference championships in 15 years. But year after year, NU's clock remains white. This decade, the only time NU ended their season with a win was in 2006, when a 4-8 squad beat Illinois in the season finale, every other year, the clock has remained white for the better part of a year. Eventually, you become accustomed to it: much in the same way your average college football fan still associates Wildcats football with failure no matter how many successful regular seasons they have, that white clock tower reminds every NU fan of a season-ending loss, no matter how many W's the team brings home over the course of the year.

Meanwhile, that elusive bowl victory - a season-ending high note that would turn Evanston's very own electrified success indicator purple untouched for nine whole months - has remained out of Northwestern's grasp.

Tonight, when the hands on that clock strike midnight, it'll be 2010: the 61st year since Northwestern won a bowl. Gents, here's to that streak never reaching 62.

Happy New Years' to all my readers. And of course, Go Cats.

See you tomorrow bright and early.