Well, now that that's all over and done with, we've got a bowl game to think about. 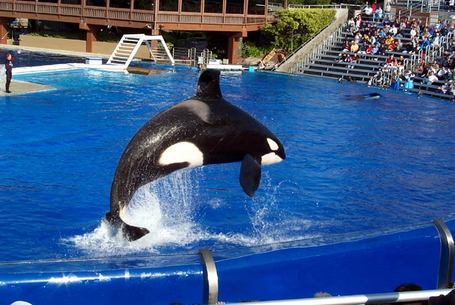 ESPN the Magazine be damned, NU fans need to get excited about Shamu.

After yesterday's game, there's no plausible argument that doesn't have two Big Ten BCS teams. So we're safe on that front.

The Outback was NU's optimal location until today, but now, it doesn't look like that's an option: a head to head won't vault a 8-4 NU over a 9-3 state school. Not happening.

So there's a close to 100% chance we're going to the Champs Sports Bowl. I mean, we could hypothetically still be Outback-bound, but, nah.

The question is whether we're playing Clemson or Miami. I'd say Miami is more likely, because I had four seperate and distinct nightmares about C.J. Spiller last night, and I didn't even get that good a night's sleep. Miami at 9-3 had a better season and probably should go to the ACC's third bowl, but I'd be surprised if Clemson's nice performance in that ACC Championship game didn't give them the edge for a higher bowl.

Comment below with your thoughts, fears, and as you hear stuff. I'll try and post as soon as I hear anything, but I'ma be readin all day long with only a brief break for a Chipotle lunch-dinner at around 3:30, so, I might miss it.