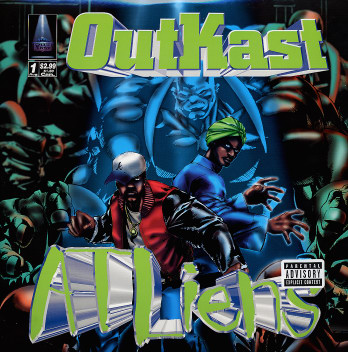 We're switching up the musical genres this week and going with some old-school Outkast. I don't know all that much rap, but I was recently introduced to this album and it's fantastic; Outkast was way better before they became popular; they're now floating face down in the mainstream.

1 (previously 1) Michigan State: "It's that same motherfucka who took them knuckles to your eye" Northwestern suffered another second half beat down against the Spartans, who keep on rolling over the Big Ten. Their undefeated Big Ten record could come to an end Tuesday night at Wisconsin.

2 (3) Ohio State: "We movin' on up in the world like elevators." The Buckeyes were very impressive yesterday in blowing out Minnesota, so I'm moving them up a spot. They should get another two wins this week at home vs Iowa and Penn State.

3 (2) Purdue: "Don't get caught slippin', leavin' the keys off in the ignition" Purdue is back on track, and their sights are set on the game against Michigan State, but they have to avoid a trap game at Indiana on Thursday..

4 (4) Wisconsin: "Over the years I've been up on my toes and yes, I've seen things." I've seen some weird things in basketball, but how Wisconsin can compete in the Big Ten with the lack of talent currently healthy is amazing. They have no business staying with Michigan State tomorrow, but I'm sure they will.

5 (7) Illinois: "Think it is when it ain't all peaches and cream." A 6-3 league record looks good, but all 6 wins are against the teams currently at the bottom of the conference. We'll see if they can hang in once the schedule gets tougher.

6 (5) Minnesota:  "I wanted to figure out, just how low could your ho go?" - I guess this is what Ohio State was trying to figure out yesterday, as they took Minnesota behind the woodshed. Tubby Smith is going to have to rally the troops in a hurry.

8 (8) Michigan: "Just two dope boys in a Cadillac." Manny Harris and DeShawn Sims can play; the rest of the roster cannot. Michigan would have beaten Michigan State on Tuesday if one of their role players had stepped up and hit some open shots.

9 (9) Indiana: "Out of this world like E.T., comin' across your TV." Watching their game on Saturday against Illinois, the referees had to be from another planet because they had no clue what was going on. A terribly officiated game, Indiana definitely got screwed late, although they still had a chance to take it into overtime and couldn't get a stop.

10 (10) Iowa: "I'm hopin', wishin', prayin' to keep my faith in you" It's hard to keep any faith in Iowa and Todd Lickliter, who doesn't seem to have the program heading in the right direction. Lickliter sounded so miserable after their loss Saturday, you would have thought his dog died. I hope he is more positive with his players in practice, as that performance was embarrassing.

11 (11) Penn State: "Left me stranded like Rapunzel in the tower" Talor Battle's teammates have abandoned him, as the losses keep piling up for Penn State. With no more Iowa or Indiana left on the schedule, an 0-18 conference showing is looking possible, although I'd be surprised if it happened.