Share All sharing options for: Know your opponent: Texas-Pan American

So Northwestern is playing Texas-Pan American (UTPA) tomorrow in basketball. Eventually I'll talk a bit about their team, but first let's break down a school that no one's ever heard of (unless you closely follow NU basketball and remember than the 'Cats beat them in 2007 and 2008). 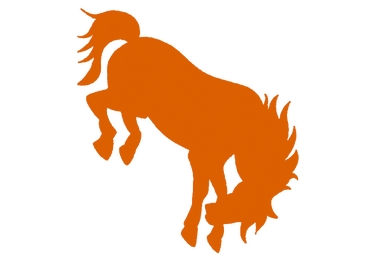 The above is the logo for UTPA, and is apparently a Bronc. No, not a Bronco, a Bronc. I'm not familiar with horses and the various types, but I've never heard of anyone calling a Bronco a Bronc, not even Denver Broncos fans. This is almost as weird as Sam Houston State being called the Bearkats instead of the Bearcats. It's unique I guess, but stupid looking and makes no sense. Silly Texans.

UTPA is located in Edinburg, Texas, at the very southern tip of the state, near both Mexico and the ocean. When the school was first founded in 1927, it was known as Edinburg Junior College and had an enrollment of two hundred. In 1951 it became a four year college and changed its name to Pan American College, and in 1964 it became a university and thus became Pan American University. And the final name change was in 1989 when the school officially became part of the University of Texas system, naturally christening themselves the University of Texas-Pan American. Today, UTPA has over 18,000 students, and seems most known for having one of the highest percentages of Hispanic graduates of any college, which makes sense given its proximity to Mexico.

As far as athletics, the basketball team hasn't had success since the early 1960s, when they won the 1963 NAIA national championship, behind star player Lucious Jackson, who was the 4th overall pick by the 76ers in 1964 and played 8 years in the NBA with 1 appearance in the All-Star game. Since then, they made the switch to Division 1 and have only made the postseason once, the 1981 NIT, where they lost to eventual champion Tulsa. Current UNLV coach and former Illinois and Atlanta Hawks coach Lon Kruger began his college coaching career at UTPA, going 52-59 overall in 4 seasons before leaving for Kansas State. For basically their entire basketball history they were an independent, but in 2008 they joined the Great West conference, which would be more aptly named Random Schools From All Over The Country Conference, as it has members from New Jersey to Houston to North Dakota to Utah. Annual NU non-conference cupcake Chicago State is also in the Great West. Right now the conference does not have an automatic bid to the NCAA tournament, but they do have one to the CollegeInsider.com Postseason Tournament, which apparently debuted last year and was won by Old Dominion.

As for famous alums, I cannot find any listing anywhere on the internet. I guess we're going with Lucious Jackson as their most famous alum. That's all I got, sorry. Tomorrow we'll look at this year's basketball team.