I am a tool with an iPhone.

Share All sharing options for: I am a tool with an iPhone.

I'm not good at technology, which is why this concept of me posting multiple things about how technology enhances my sports fandom is hilarious.

I've had the same laptop for four years now. It has to be plugged into the wall at all times, because if it becomes unplugged the whole computer turns off because the battery doesn't work. Every time I open the screen, I have to hit the power button and watch the computer reboot for a few seconds.

I don't understand all but the very basics of computer technology, which is in part why I don't know how to fix the fact that my computer battery literally does not work and needs to be plugged into a wall.

It has taken me three days to figure out how to illegally download the new Kanye album. (Working on it!

I struggle with microwaves.

Point being, I'm not the tooly guy who gets pumped by all the new technology that comes out and has to have it. It took me like three years to give in and purchase an iPhone.

But now that I have it, I can't live without it. It's the only piece of technology I use for my journalism classes - helpful, considering most students spend money on a still camera, video camera, tape recorder, and lavalier microphones, whereas I just have an iPhone.

Knowing that I'd have to do a post like this in a few weeks, I kept track of all the things I did on my iPhone a few weeks ago before, during, and after the Michigan State game - the last home game, for those of you who aren't smart.

Alarm clock: I don't have an alarm clock. I have an iPhone. Depending on the time I want to wake up, I will set between 3-10 alarms to force me to actually become conscious enough to realize that I have to leave my bed. Considering this alarm was set for 9 a.m. on a Saturday morning, I probably set closer to 40 alarms, spaced about two minutes apart, so that eventually one of them would wake me up. (I'm a deep sleeper.)

Alarm clock again: I fell back asleep almost immediately after waking up. Luckily, some of those 40 alarms were still set for about 9:30.

Finding out where tailgating was happening: We probably should have organized this beforehand. But we didn't, so I texted/called the tailgating crew while we were all bleary-eyed to make sure it was going down.

Taking a photo of a bottle of Wildcat Malt Liquor: My iPhone is also a camera. My only camera. iPhone purchasing and data plan left me broke enough that I don't need another camera. 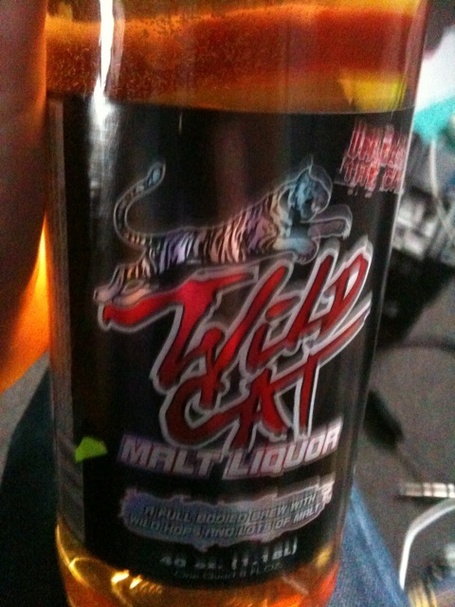 Blurry? Yes. A photo? Also yes. Good enough for me. I can post this on my blog later.

Streak for the Cash: It's addictive. I've never gotten above a W12, even though the winner most months is a W24, I still convince myself that betting on Russian Premier League soccer games and golf events I've never heard of will get me $100,000. Every Saturday, sports I actually know about - college football! - show up, and I get to feel like I have an even better chance of getting $100,000. My current streak is a one-game losing streak. Anyway, once I found out this came on iPhones, my bets have gotten more and more reckless and less and less researched, which actuallly doesn't really change my chances of winning at all.

Score-checking: Tailgating went too long. But my iPhone allows me to tell the obnoxious Michigan State fans behind me on this bus that their team is losing 7-0. And that we have the ball back.

Google: "how not to have your starting running back be jacob schmidt and fumble at the 1-yard-line"

Missing a call from my grandma: Who calls a college student at 11:30 a.m. on a Saturday?

Texts: all about Adonis Smith.

Checking Sippin' on Purple: It's a home game, so I'm not actively checking the comments section. However, I did a few times, most notably at halftime. Two people ask me how my blog is doing - one who reads it, one who just knows I have a blog and wants to be annoying - and I am able to bust out accurate - and large, thanks, everybody! - comments section numbers.

(Nah, but, seriously, what we do in the comments on gameday is awesome.)

Airplane mode: After the game, I don't want to hear from anybody or anything about NU's loss, so, rather than receive the text messages and phone calls, I tell my phone to pretend that I am 35,000 feet in the air so I don't have to hear about it.

Music: Northwestern lost to Michigan State even though they were up 17-0 and I need to listen to some Otis Redding because I don't miss my water until my well has run dry.

So that's it. I might not have a Droid, but, I'm just glad my phone doesn't go "DROIIIIIID" every eight seconds.