Share All sharing options for: "Put you in a mansion/Somewhere in Wiscansin" - T-Pain

I've made it clear that this is my favorite Wisconsin-related lyric, mainly because T-Pain has no need for your already-determined spelling of state names: 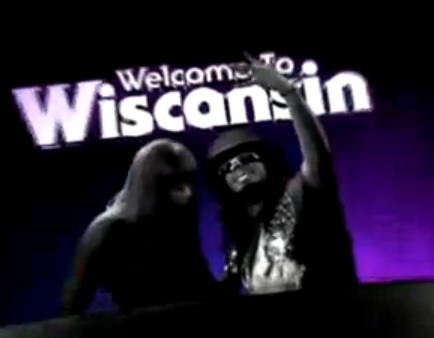 AAAAAAAAAANYWAY, the posting schedule g ot completely screwed over this week, so, let's just take this post and call it a draw. Posting about a trillion times for Illinois clearly didn't help, so, maybe this will, and if it does, I'll just stop blogging altogether. (Probably not.)

When we got the ball: So, Evan Watkins and Adonis Smith, huh? Just like we drew it up back in August. First off, I know they're redshirt freshman and true freshmen. But we're going to need to see NU's quarterbacks, you know, throw, if they want to win. Kain Colter was nothing but a decoy in the pocket - he ran every time - and Evan Watkins seemed to gain confidence as the game went along but still wasn't being used as a passer primarily. I mean, he was pretty bad and threw a blatand ball behind a guy that led to a pick, but well, NU doesn't have a chance in hell without a passing game, so it's your best option. Bummer to see Trumpy out, but I don't foresee the running game taking that big a step back - Adonis Smith has seemed passable in his time, although clearly Trumpy was NU's best running back, in well, a while. NU is going to need to spread the ball around and try and at least keep the Badgers off balance by going to a bunch of different options - which it didn't seem comfortable with against Illinois.

Semi-under-the-radar player to watch: Arby Fields. Yes. I said it. Arby has regressed in monster fashion this year, but I still have faith in the guy to keep his feet churning forwards after a year of completely failing to do that. He has speed, nobody will take that away from him. A shock running touchdown by Mike Trumpy was what kept NU in the game last week - we'll see if we can think Arby's on the way to the end zone this week.

When they got the ball: There is no hope. John Clay is injured and it does not matter. He's one of the best running backs in college football, and he got hurt, and Wisconsin has had back-to-back 300 yard rushing games, thanks to 340 yards and 7 TD's by Montee Ball and 325 yards and 4 TD's by James White over the past two games. Yes, those are just over the past two games. Never mind the fact that Scott Tolzien has completed 73.9 percent of his passes on the year and is likely going to keep Dan Persa from breaking the Big Ten record - he barely throws, only averaging about 20 passes a game. (Because he's so damn efficient, he's still averaging 9.16 yards a pass and has twice as many touchdowns as interceptions.) Basically, I can see no way Northwestern can stop Wisconsin, because they're a friggin offensive juggernaut and NU gave up 330 yards to Mikel Leshoure on the ground last week, which is a season for a Northwestern running back.

My pick vs. the spread: Wisconsin. NU lost by 21 last week to a team that isn't half the squad Wisconsin is.

My pick five months ago and five-word jokey summary: Wisconsin, and "Dangerously Cheesy". However, if NU pulls the upset to validate my prediction of the Cats being 8-4.

And my pick today...

Wisconsin, 54, Northwestern, 28. Neither team will keep the other team from scoring much. Wisconsin is just a lot better at scoring, and, quite frankly, has a lot more to play for than Northwestern does.