It's bowl week, and I'm going all out.

Last year, I constructed a system for devising how scared you should be of Auburn's offense and defense. Conclusion: scared. I spent a lot of the offseason working on tweaking this system: trying to find a more accurate way to devise potential offense-triggered fear detectors. I spent days and weeks of my life trying to determine exact measures of you being scared.

However, at the end of my research, most of which was just me sitting in the basement of the engineering building with a soldering iron, I realized that the system I used last year - the fear-o-meter - was engineered damn near perfectly. So, for a second straight year, I will use the same fear-o-meter to indicate how good our bowl opponent is.

Without further ado, I present: the fear-o-meter itself. 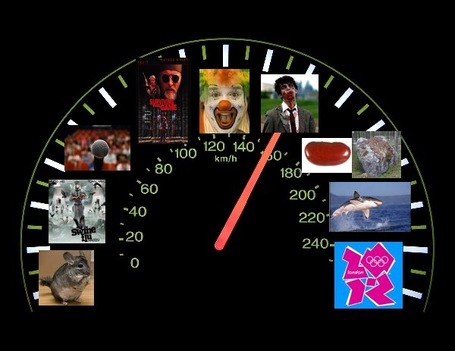 After the jump, I'll launch into the specs of the Red Raider attack. (RAIDER ATTACK!)

Quarterback: Texas Tech has a genuinely weird situation going on at QB, so let's dissect it.

Mike Leach had a knack for turning quarterback statistics into godly things nobody could truly comprehend. He made Tim Couch look like he deserved to be a No. 1 pick. He turned unrecruited backups into NFL propects.

Taylor Potts has been Texas Tech's quarterback the past two years, and has been phenomenal. Two 3,000 yard seasons, both with 65 percent completion ratings, this year with 31 touchdowns to only nine interceptions.

So why then, the announcement two weeks before Potts' final game as a Red Raider by coach Tommy Tuberville that Potts would split snaps under center with senior backup Steven Sheffield?

Despite the phenomenal stats, Potts hasn't had the rosiest career. First off, his 3357 yards this year are the least for a Texas Tech quarterback in a while after a decade where Tech QB's routinely racked up 4-5000 yards. Secondly, against good competition, Potts has been sub-par. In Texas Tech's four games against ranked opposition - Texas, Oklahoma State, Missouri, and Oklahoma - Potts completed 56 percent of his passes with five touchdowns and five picks, as the Red Raiders mustered 55 combined points - dismal for Tech's high powered offense. (Against Oklahoma - the last game Tech played against meaningful competition - he went 18-36 with two picks and no touchdowns.) Yes, Potts had the tenth most passing yards of any quarterback in the nation, but he attempted the fourth-most passes - his 6.8 yards per attempt is below the halfway mark for FBS quarterbacks. Potts has been somewhat maligned, especially during his 2009 campaign.

And thirdly, his backup, Sheffield, has been spectacular. Last year, Sheffield was pressed into duty after Potts suffered an injury against New Mexico in a game where Potts threw two picks and no touchdowns. Sheffield would lead the Red Raiders to three straight wins, including a 490-yard, seven-touchdown performance against Kansas State. Sheffield was forced to play again in the Alamo Bowl, where, despite Potts' 372 yards, Tech trailed 31-28. Sheffield went 9-11 on two scoring drives as Tech won 31-28. Sheffield hasn't played much this year, but he will see snaps against Northwestern, in his final game as a Texas Tech quarterback.

The Red Raiders have two very similar quarterbacks: both have spent five years at Texas Tech. Both know the ins-and-outs of a system based on spreading the field and passing a disturbing amount of times. Both have racked up insane stats in blowout wins. Both have no running capabilities whatsoever.

While Potts will surely see the majority of time Saturday, his backup is also very capable. Neither one is Graham Harrell: don't expect a 500-yard outing, even with Northwestern's paper-thin pass defense. But Tech will go to the air over and over and over and over again, and both QB's are more than capable.

Running back: A lot was made of the potential improvement of the fantastically named power back Baron Batch under coach Tuberville - with Leach gone, the semi-ignored run game would flourish.

This notion was somewhat misguided. First off, it's not like the run game was completely irrelevant under Leach: running backs such as Taurean Henderson and Shannon Woods routinely had between 700-900 yards rushing. Indeed, as a starter, Batch had 758 yards and 884 in his sophomore and junior years, averaging nearly 7 yards per carry as a sophomore and scoring 14 touchdowns as a junior.

His workload under Tuberville, surprisingly, has not greatly improved. With a bowl game to go, Batch has four more carries - and 79 less yards - than he did last season. While he managed three 100-yard games as a junior, he has only gotten one this year. And he's only found paydirt five times. However, this year, Batch has been a workhorse in the face of adversity. Three of Batch's four best games came against ranked teams, including his 134-yard performance against Missouri where he carried the ball 28 times - a career high. While Potts struggled to establish an air game against Oklahoma, Batch gained over 8 yards per carry on the ground. It should be noted that under Tuberville, Batch's role in the passing game has lessened.

In summary, reports of the demise of the pass-happy attack were premature. Texas Tech still doesn't look to kill you on the ground. Whether they could if they wanted to is a legit question. When the air game isn't working, they will go to the ground - with mixed results.

Batch has a very productive backup in Eric Stephens - he's not physically imposing at 5-foot-8, 190 pounds, but he managed to be a factor, earning 112 carries - not bad for a backup in a pass-based system. He pumped out impressive 90-yard days against Oklahoma State and Colorado - outrushing Batch while attaining a higher yards-per-carry in each performance.

Tech has two feature wide receivers: Lyle Leong and Detron Lewis. In terms of receiving yards, the two are almost identical: Leong has 808 yards, Lewis has 803. But the two get theirs in surprisingly different ways.

Lewis is more of a possession receiver: he led the team in receptions - 79, good enough to be 14th in the nation. However, Leong, who also runs track for Tech, was one of the most potent deep ball threats in the country. His 17 touchdowns were the second most of any wide receiver in the FBS, and more than the 15 rushing touchdowns the entire team put together. A lot of his games seem unimpressive - five receptions, 60-ish yards - until you look over and realize that he had two 20-yard touchdown grabs in that game. Leong didn't catch a single ball of more than 40 yards on the year, but murdered secondaries 15-35 yards down the field, generally in the end zone - it's pretty ridiculous realizing that over a quarter of his catches were for touchdowns.

Past Leong and Lewis, both of whom are spectacular threats, there's not much wide receiver depth. Alex Torres was next, with just about half the receptions of either Leong or Lewis, then there's Austin Zouzalik, with 380 yards and a touchdown, and then there's a bevy of guys who get the ball once or twice a game, including the running backs. Basically, if Texas Tech wants to hurt you, they're going to their two top guns. The rest of the wide receiving corps is good to spread the field and check down to make you pay attention to them, but it's clear that there's only two players on the field that can really hurt you.

Offensive Line: It's tough to evaluate a offensive line like Texas Tech's. It's not the tiny lines Mike Leach had to work with when he decided to spread his line out way farther than any other team could possibly imagine in order to free up passing lanes and force the defensive ends to line up that much further from the QB, that's for sure: every starter is at least 6-foot-3 and 300 pounds. The strength of the line is on the left side, where left guard Lonnie Edwards earned second-team all-Big 12 honors and the awesomely named LeAndre Waddle earned an honorable mention. The team allowed 21 sacks, which is about once every 27 attempts, which, to be honest, isn't bad. The offensive scheme isn't very conducive to run blocking, but the team does fine.

Texas Tech knows what it does - passing. Despite the new coach, it's still a very one-faceted attack. That being said, it's a very, very good, very, very efficient one-faceted attack. Smart quarterbacks and speedy wide receivers - generally four of them, even if only two are going to get the ball - are always a recipe for points, and this is a team that can score those very quickly. It's not an elite offense - in four games against ranked opponents, the team put up all three of its sub-20 point performances, and eked out a 24-17 victory over Missouri, its fourth-lowest output of the year. But if you struggle to defend the pass, Texas Tech will not hesitate to hang up a lot of yards and a lot of touchdowns - fast - on you. If you're wondering about the team's scoring ability, keep in mind that the team only attempted 14 field goals on the year - converting only nine, their 40+-yarder specialist went 1-4 on the season. They'll hit you through the air, and they're not looking to put up three: they're looking to score a touchdown, and if you're not a top defense, you'll have trouble stopping them.

The run-and-gun game of Leach is not dead. Certainly, it's not as successful as it was with Graham Harrell and Michael Crabtree - perhaps some of that is due to coaching staff changes, probably a large part of it is due to new, less otherworldly talented personnel. But what is certain is that Texas Tech's spread passing attack is still potent.