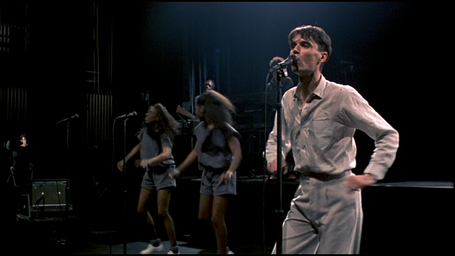 This week we pay homage to the Talking Heads and their front-man David Byrne, who for my money is one of the greatest live performers of all time. If you've never seen Stop Making Sense, then go rent it or buy it immediately. I don't even want to think about how much cocaine Byrne and company consumed before the show, but whatever they were doing, it helped produce a legendary performance.

1 (previously 2): Purdue: "You may find yourself in a beautiful house, with a beautiful wife" - Purdue now has the inside track to the Big Ten title and a #1 seed in the NCAAs, but they have to win at the Barn against a desperate Minnesota team.

2 (1): Ohio State: "Why stay in college? Why go to night school?" - Not much reason for Evan Turner to stay in school given how much money he'll make as an NBA lottery pick. Sadly though, I think he will lose the national player of the year race to the overrated John Wall. College writers are mistaking NBA potential with current skill; while Wall may be the better prospect, Turner is currently the better player.

3 (4): Michigan State: "Back-slidin', how do you do?" - I am moving them up due to Wisconsin's disappointing loss to Minnesota, but Michigan State previously looked to be the dominant team in the conference, and have now slid back to the pack. The Only Colorss had an interesting recap of the Ohio State loss.

4 (3): Wisconsin: "Lights on, nobody home" - That goes out to Tim Jarmusz, who must own compromising pictures of Bo Ryan, because he brings very little to the table yet still gets a ton of minutes. I don't get why he plays over Ryan Evans; Evans is better at shooting, defense, and early 90s flat-top haircuts.

5 (5): Illinois: "Don't get upset, it's not a major disaster" - No shame in losing at Purdue despite Demetri McCamey's 16 assists, but now their trip to Michigan tomorrow becomes a must win.

6 (7): Minnesota: "Some good points, some bad points" - Minnesota has been crazy inconsistent of late; they looked done after losing to Michigan and Northwestern, but salvaged their season this week with wins over Wisconsin and Indiana. I'm really looking forward to watching their game vs Purdue Wednesday.

7 (6): Northwestern: "I can't seem to face up to the facts" - Many NU fans couldn't admit that the 'Cats weren't on the bubble any more all week, but finally everyone has conceded defeat. For the love of God, please let them beat Iowa on Thursday, I cannot stomach the possibility of getting swept by the Hawkeyes.

8 (8): Michigan: "Hold tight, we're in for nasty weather" - Michigan's remaining schedule is tough, and next season they lose DeShawn Sims and possibly Manny Harris. Without those two, things could get really ugly.

9 (9): Iowa: "I don't know why I love you like I do, all the changes that you put me through" - There has been a ton of roster turnover under Todd Lickliter; most recently guard Anthony Tucker announced he was transferring. Still, Iowa fans seem to want to give Lickliter at least another year.

10 (11): Penn State: "Its hard to imagine that nothing at all, could be so exciting, could be so much fun" - Penn State had a lot of exciting games despite their winless record, and this week they finally broke through with 2 road wins over Northwestern and Michigan. It's unclear whether that's due to NU and U of M sucking or Penn State playing well, but either way the Lions won't be a pushover in the Big Ten tournament.

11 (10): Indiana: "I've got a girlfriend that's better than that" - There are probably some woman's teams playing better than the Hoosiers right now, they are just getting killed. Without Creek they lack offensive firepower, and the defense has been MIA all season. I'm a lot less nervous about NU's trip to Assembly Hall than I was a few weeks ago.