A look ahead to the Big Ten tournament, and NU rooting interests the rest of the regular season

Share All sharing options for: A look ahead to the Big Ten tournament, and NU rooting interests the rest of the regular season

Thanks to Northwestern's ugly losses to Iowa and Penn State, the only way into the NCAA tournament is through winning 4 games in a row to capture the Big Ten tournament title. I recognize that's a huge long shot, but the alternative is to talk about NIT seeding, which is so depressing that I refuse to do it until the 'Cats are officially eliminated from the NCAAs. So instead I'm going to break down what the Big Ten tournament seeds are likely to be, and what scenarios work out best for Northwestern.

For those unfamiliar with how the Big Ten tournament works, all 11 teams play in it, and it begins on Thursday, March 11th at the Conseco Field House in Indianapolis. The top 5 teams get a bye to the quarterfinals, and on the first day the 6th place team plays 11th place, 7th place plays 10th place, and 8th place plays 9th place. The winners advance to the quarterfinals, with the 8/9 winner playing the 1st place team, the 7/10 winner playing the 2nd place team, and the 6/11 winner playing the 3rd place team. Barring a complete collapse by Illinois, the top 5 teams in the standings are set, so first I'll break down how Day 1 will look, then I'll take a look at the top 5 seeds. 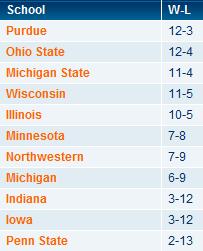 First off, Penn State is all but locked into the 11th seed. They lose tie-breakers to both Indiana and Iowa, so they will need to win 2 of their last 3 to finish anywhere but 11th. Those 3 games are home vs Northwestern and Purdue, and at Michigan State. I don't see any way they win in East Lansing, and while they could beat Purdue sans Robbie Hummel at home, I wouldn't bet on it. Obviously they're very capable of beating Northwestern, but a win there won't be enough.

Iowa and Indiana will be fighting it out for the 9th seed, and that will be decided this weekend when the two teams play in Iowa City. Given how terribly Indiana has been playing of late, the Hawkeyes will most likely win and secure the 9th seed.

As for the 8th seed, Michigan is a pretty sure bet there. They lose the tie-breaker against Northwestern, so they will need two wins to move up, and do that they'll need to win either at Ohio State or at Michigan State. They will also need two wins to pass Minnesota, since the Gophers are a near lock to get to 8 wins given that they host Iowa to finish the season.

So that leaves Northwestern and Minnesota competing for the 6th seed. Minnesota actually could pass Illinois for the 5th seed should they win their last three and the Illini lose their last three, but that's a huge long shot. NU has two more games left, at Penn State and Indiana, while the Gophers have games at Illinois and Michigan before hosting Iowa to end their regular season. I'd say Minnesota probably splits the two road games and beats Iowa, so the 'Cats will have to win both road games (not an easy task) to force a tie. The teams split the season series, so will need to go to the second tiebreaker:

a. When arriving at another pair of tied teams while comparing records, use each team's record against the collective tied teams as a group (prior to their own tie-breaking procedures), rather than the performance against the individual tied teams.

b. When comparing records against a single team or a group of teams, the higher winning percentage shall prevail, even if the number of games played against the team or group are unequal (i.e., 2-0 is better than 3-1, but 2-0 is not better than 1-0).

Confused? Me too. I do know that if Purdue maintains their outright lead in the standings, NU wins the tiebreaker, but if Ohio State wins it outright, Minnesota would win. I'm having a bit of trouble interpreting the rules in the case of a tie for the championship, but I think Northwestern would win. Don't quote me on that though.

Personally, I'd rather have the 7th seed than the 6th seed, because that would mean a first round match-up with Indiana rather than Penn State. I know Indiana would have somewhat of a home-court advantage in Indianapolis, but the Hoosiers have been absolutely terrible recently, having lost their last 9 games and their last 6 by 14 or more points, while Penn State has been playing better of late. In fact, I think I'd rather play Iowa than Penn State, especially after that showing from the Hawkeyes last night.

Should Northwestern reach the quarterfinals, they will most likely be the 7th seed and will take on the 2nd seed. Right now that would be Ohio State, and given how easily they beat Northwestern earlier this season, that wouldn't be a good thing. The good news is that Ohio State still has a chance at claiming the #1 seed. The Buckeyes finish the season with home games against Michigan and Illinois, both of which should be wins. Purdue would then have to win their final three games (home vs. Michigan State and Indiana, and at Penn State) to win the Big Ten title outright, and that won't be easy without Hummel. In the event of a tie, I believe Ohio State would win the tiebreaker with Purdue, and would also win a 3-way tiebreaker involving them, Purdue and Michigan State, with Purdue getting the #2 seed and Michigan State getting the #3. Even were Hummel healthy, I think Northwestern would match up better with Purdue than with Ohio State or Michigan State, and with Hummel out Purdue is obviously preferable as a quarterfinal opponent. So all 'Cats fans should be rooting for Michigan State to beat Purdue on Sunday.

Now should Minnesota falter and Northwestern end up with the #6 seed, they would (hopefully) take on the #3 seed in the quarterfinals, which should be either Michigan State or Wisconsin. It could be Purdue if the Boilers completely fall apart, but that seems unlikely. I think the 'Cats match up better with Wisconsin, so root for the Badgers to win their last two games over Iowa and Illinois, and for Michigan State to somehow lose at home to either Penn State or Michigan. Illinois seems like a lock for the #4/#5 game, but they could theoretically move up to third, which would certainly benefit the 'Cats.

- Root for Minnesota to secure the #6 seed

- Root for Ohio State to win out

- Root for Iowa to beat Indiana on Sunday

Hopefully I haven't totally confused everyone.