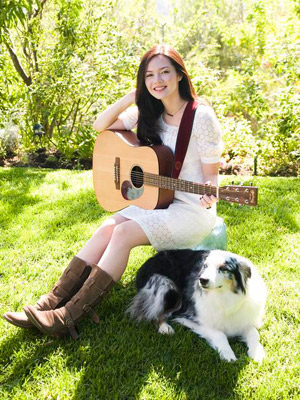 To put it mildly, we're going in a different direction in this week's power rankings, spotlighting the talents of the heavenly Marie Digby. For those not familiar with the work of Ms. Digby, she became an international Youtube sensation after posting videos herself performing the music of artists ranging from Linkin Park to Britney Spears to Beyonce, and has now released multiple albums of her own songs. Her cover of Rihanna's Umbrella, seen below, has amassed a staggering 15 million+ hits:

So sit back and relax, and while reading my award-winning Big Ten analysis, enjoy watching the lovely Marie greatly improve songs you never really liked before.

1 (previously 4) Wisconsin:"Ohhhhh stupid for you" I am now stupid for Bo Ryan and Wisconsin, and I've fully committed to their Big Ten title bandwagon. Their remaining schedule is by far the easiest of any of the title contenders, and once Jon Leuer comes back from injury they will cruise.

2 (1) Michigan State: "There's a lifetime through the fog and the rain" I'm moving the Spartans down a spot after getting swept this week and due to the injury to Kalin Lucas, although you could certainly make a case for them stil being #1 as they are still first in the conference. Actually I think the top 4 teams are all so close together you could rank them in any order and not be way off. Anyways, despite the fog and rain currently surrounding them, there's plenty of time to turn things around, starting Tuesday at home vs Purdue, a game I fully expect Michigan State to win.

3 (2) Ohio State: "It's like the whole world stops to listen" Everyone should stop what they're doing whenever Evan Turner is playing. His performance against Iowa yesterday was so dominant it just wasn't fair. Tim Doyle put it well after the game by saying it was like an 18 year old playing Little League. Turner is the national player of the year right now and it's not particularly close; John Wall may be a better NBA prospect but he has not played as well as Turner has this season.

4 (3) Purdue: "Your feelings are the one thing out of my control" This would be true in most cases for opposing fans, yet apparently Chris "Rabbit Ears" Kramer let the mean Indiana fans get into his head on Thursday, as he felt the need to stomp on the IU logo after Purdue narrowly escaped with a win on the same court where Indiana lost to the mighty Loyola (MD) Greyhounds. With this classless act, Kramer has cemented his status as the most hated player in the Big Ten conference, and it isn't a particularly close call. Making it even worse in this instance was that Kramer, who is usually a key contributor to Purdue's success, was basically a non-factor with just 5 points and 1 steal in his 26 minutes. His whining about being heckled is reminiscent of the hypocrisy displayed by J.J. Redick and Duke, who constantly complained about mistreatment by opposing fan bases while turning a blind eye to their own student section's taunts. Of course, stomping on the IU logo was something poor little Chris "just had to do", because "to walk out after they were just heckling at us like crazy, swearing at us, a little bit of everything, you just let them know you picked up a game they wanted." No Chris, you moron, the scoreboard already showed what happened. I don't remember Evan Turner stomping on the Purdue logo when his team won at Mackey this year, nor do I recall Craig Moore or Kevin Coble doing anything like that after winning in Mackey last season. Those players heard it from the rowdy Purdue student section, yet they ignored it and let their play and the final score speak for itself. Despite my respect for Matt Painter, and my admiration for the talents of Robbie Hummel and E'Twaun Moore, I cannot ever bring myself to root for Purdue solely due to the presence of Chris Kramer. Here's an idea Chris, maybe instead of spending entire games listening to the hecklers, you should work on your patented defense, since your team would be tied for the Big Ten lead if you hadn't let Jordan Taylor treat you like a revolving door up in Madison. While Kelsey Barlow also showed poor sportsmanship by directing a choke sign at Verdell Jones, he at least apologized for his actions later instead of baselessly justifying his antics like Kramer.

5 (6) Illinois: "Wash away what I've done" The Illini's win over Michigan State helped wash away the damage done by inexplicable non-conference losses to Bradley and Utah. Their schedule is brutal the rest of the way, so Illinois will have plenty of chances to earn more marquee wins, but it won't be easy.

6 (5) Minnesota: "Even when we're up against the wall" The Gophers were up against the wall at Penn State, but Lawrence Westbrook bailed them out with an extremely difficult 20 footer at the buzzer. If they take care of business Thursday against Michigan, the matchup Sunday in Evanston will have huge bubble implications for both teams.

7 (7) Northwestern: "Sweet dream or a beautiful nightmare?" Time will tell whether this season finishes up as a dream or a nightmare for the 'Cats. The trip to Iowa Wednesday will tell us a lot about this team.

8 (9) Indiana: "Feels like I've gotta let go, from the way it was before" Reading some of the comments on Inside the Hall after yesterday's loss to NU, a lot of Indiana fans just can't let go of the Bobby Knight glory days and are ripping Tom Crean for his performance this season. Crean has done an excellent job so far in his rebuilding, and he has his young team playing hard every night. If leading scorer Maurice Creek were available, the combo of him and Verdell Jones would be very tough for Big Ten teams to stop.

9 (8) Michigan: "Cuz I don't believe in you, anymore, anymooooore" I'm moving Michigan down for how pitiful they were in the second half vs Northwestern. Indiana lost by a similar margin at Welsh-Ryan, but at least they played hard for 40 minutes. I kept thinking Michigan might actually show some heart at some point, but this team has quit on John Beilein.

10 (10) Iowa: "The pain sets in but I don't cry" Iowa has been pretty painful to watch all season, but there have been signs of progress recently. The Hawkeyes have hung in there with Ohio State twice, which is a lot more than Northwestern can say of their effort against the Buckeyes. I'm getting really worried about NU's trip to Carver-Hawkeye on Wednesday.

11 (11) Penn State: "Should I surface this one man submarine?" - Talor Battle has been a one man team for too long, and he may be ready to throw in the towel after another heartbreaking loss. This team reminds me a bit of the NBA's New Jersey Nets, while the Nets are clearly bad, on paper they aren't close to the worst NBA team ever. Penn State certainly isn't a good team, but on paper they are no worse than Indiana or Iowa. I also think they'd mop the floor with 2008-09 Indiana and 2007-08 Northwestern, both of whom were 1-17 in the Big Ten. So hopefully they get at least one win this year, as they don't really deserve to be winless in league play.