Technically Not Over Yet: Looking at NU's Postseason Options.

Share All sharing options for: Technically Not Over Yet: Looking at NU's Postseason Options.

So, with yesterday's loss to Purdue, Northwestern is finished playing the games that you're guaranteed to play in at the beginning of the season. If you look at our schedule, there are no upcoming games.

But don't pour one out for Jeremy Nash just yet: yeah, losing to Purdue severely tarnished NU's hopes of playing in a respectable postseason tournament, but it's still almost guaranteed that Northwestern hasn't played their last game yet. For better or worse, NU will most likely accept a bid to a postseason tournament. We'll probably find out where NU is going tomorrow night, and the Cats will play as early as Tuesday.

After the jump, I'll give you the lowdown on each possibility. 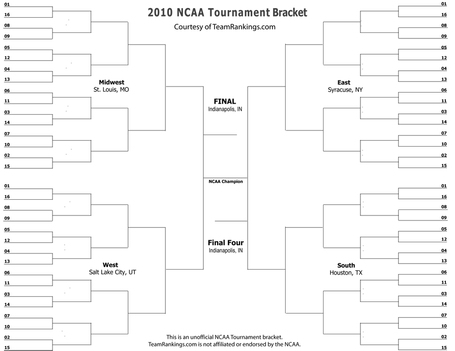 What: The big daddy of college basketball tournaments. You've probably heard of it.

Can NU make it?: Goodness no. Technically, the selection committee is allowed to select any team in the country with an at-large bid, and hypothetically, that team could be Northwestern. Other hypothetical events: Joe Lunardi hooking up with Scarlett Johansson, me studying for my final on Monday before writing a post about obscure college basketball tournaments. To get a bid, NU would have had to have won the tournament (automatic bid) or lost in the final with wins over Purdue and MSU, with one of those wins being noncompetitive. Anything else wouldn't have cut it, most likely. Give up, and stop whining, that is, if you were still whining.

Would NU accept a bid?: Uhhh, Jim Phillips and Morty Schapiro would probably each consider selling the other into wage slavery in a southeast Asian sweatshop for an NCAA bid, and neither of them would feel bad about it, including the one in wage slavery. That's how important that bid would be for the school. (Also, the NCAA made it illegal for their schools to decline NCAA tournament bids after Marquette did it in 1970, so there's that.)

What: The perennial second-best postseason tournament, the NIT takes the 32 next best teams and put them in a big ol' pot that ends up with the semis and finals taking place in the World's Greatest Arena, Madison Square Garden. (Go New York Go New York Go!)

Can I watch?: Yeah. During the NCAA's, the worldwide leader needs counter-programming, baby, and NIT provides the ESPN family of networks with the perfect way to draw a really tiny amount of viewers away from CBS and the juggernaut that is the big tourney.

Who typically competes?: A combination of three distinct groups: good programs in a down year, who are never really that into it, teams that just missed the NCAA's, and are pissed, and regular-season champs of minor conferences that didn't win their conference tourneys and were from small enough conferences not to get at-large bids to the NCAA's. It's a pretty high level of competition.

Can NU make it?: Tough question. Some NU people are furious about the concept that we won't get an NIT bid, and to some extent, they should be. We made the NIT last year, and we have more wins this year! Can't they cut us some slack?

The thing is, there are going to be a lot of teams that miss the NCAA's with 20 wins or more. Probably around 50 of them. A lot of these teams have a few good wins on their resume.

Northwestern has adapted a strategy in football for scheduling that I think is pretty smart: make sure you have at least eight - possibly nine - games at home, make as many of your out-of-conference games against meaningless opponents as possible. It's smart. In football, wins are the be-all end-all. You have six, you make a bowl. If you can get four off of the Towson Tigers of the world at Ryan Field, you make postseason play.

It sure as hell looks like NU adapted that strategy for basketball this year. No true out-of-conference road games (EDITORS NOTE: ONE true out of conference road game. forgot about NCState. Thanks, @manofsuds!), very few out-of-conference games against good opponents. I wrote back on the old site that NU's basketball schedule was great, for people who really, really hated RPI, and, well, I'm a prescient dude. The Cats handled their biz, but they played poorly in the conference season. The price they'll pay for a favorable schedule will be that they most likely won't make the NIT: there are seven auto bids from minor conferences, and a lot of teams with similar win totals, but with higher quality wins, better conference tournament performances, and no choke jobs against Penn State and Indiana down the stretch. I'd peg NU's odds of making the NIT at all at 20%, roughly, but don't count it out.

Would NU accept a bid?: Teams have been known to occasionally decline NIT bids, but thus far in history, NU basketball success has been measured in NIT bids. Make of this statement what you will, but it's true.

What: In 2008, a shady sports marketing firm called the Gazelle Group decided they could make some money off of more postseason basketball. So they started a 16-team tourney with a really uncreative name to coincide with the NIT, featuring all games at home sites and a best-of-three championship series.

Can I watch?: Yes, actually. In market games are on the FoxSportsNet channels, and all games are available on the website, it's for a fee, though, and I hope none of you pay for that, because it's silly.

Who typically competes?: Each edition of the tourney has seen three major conference teams compete: in the first year, it was Cincinnati, Virginia, and Washington, last year, St. Johns, Oregon State (the eventual winners) and Stanford. However, the first year, there were at least four teams (that we know of) from major conferences that were offered and turned it down, not just because it's embarrassing to be in the CBI, but because a) the tournament makes teams guarantee money for home games up front and b) hosting games nobody will attend loses money as well. Virginia estimates they lost up to $150,000 on their tourney run. That being said, it's primarily a lot of respectable mid-major level programs, with a few of the lower-level big boys sprinkled in.

Can NU make it?: For sure. NU is probably on the lower end of the CBI's spectrum this year, to be honest, but I'd be surprised if they didn't pick up a bid, especially considering some of the schools likely to be offered will no doubt decline. The CBI is probably pleased any time they can convince a major conference school that had a passable year to join.

Would NU accept a bid?: Yes. We're not at the level where we can act like we're above a tournament that has featured major conference teams.

Would I be pumped?: No, on principle. The plus side is that while NU has no chance of being a higher seeded team in the NIT, they very well could host a home game if they feel like footing the bill next week, and I could use another home game, especially considering I'm done with my finals Monday.

What: Some people saw that the CBI wasn't a total failure, and were like, "hey, we could do that!" So this joke of a company, Collegeinsider.com (not collegebasketballinsider - just Collegeinsider, presumably sorta similar to CollegeACB, but I don't feel like actually giving their company the dignity of me going to their website.) made aj oke of a tournament supposedly to compete with the CBI in 2009. The problem is, it doesn't really, as the teams in this one are a caliber that's a little bit below the CBI. (Also, "Collegeinsider.com Postseason Tournament" DOES NOT abbreviate to "CIT", as hard as you make it try. "CIT" means "counselor-in-training". "CPT" or "CIPT" or "CI.comPT" would have been acceptable. If those don't work for you, change the name of your joke of a tournament.)

Can I watch?: Not that I know of. Did I mention this tournament is a joke?

Who typically competes?: Exclusively above average to mediocre teams from mid-major conferences, and this year, the champion of the Great West conference gets an automatic bid. Did I mention this tournament is a joke? Yeah? Oh, well, it's still a joke, surprisingly.

Can NU make it?: Hopefully, they're in the NIT or CBI, but if they're not, the CIT would be pretty obligated to offer them a bid. However, it appears the CIT might be gunning for a niche as "the mid-major tournament", so, because they're a joke of a tournament, they might opt not to bid NU.

Would NU accept a bid?: To be honest, probably. Nobody knows the difference between the CBI and CIT in the grand scheme of things - I didn't until I wrote this post, but it's become immediately evident that this tourney is a joke - so going to one and not the other would only make a difference to the select few who can distinguish between the two and actually care enough to pay attention to NU sports during the midst of the NCAA's. NU wants to play in the postseason, period, and this is the postseason.

Would I be pumped?: Oh dear. No. Although the previous statement about a home game next week applies.