So, I should never, ever talk about women's lacrosse.

Share All sharing options for: So, I should never, ever talk about women's lacrosse.

I talked about it for the first time on this blog Wednesday. I decided that hey, this is a Northwestern sports blog, and our best sport is women's lacrosse - I probably should devote some focus to that squad as they make their run down the stretch, on their quest for a sixth straight national championship. So Saturday afternoon, I decided to debut the Women's Lacrosse Jinx Countup, which I planned on continually updating until the Wildcats lost a game. It looked like this: 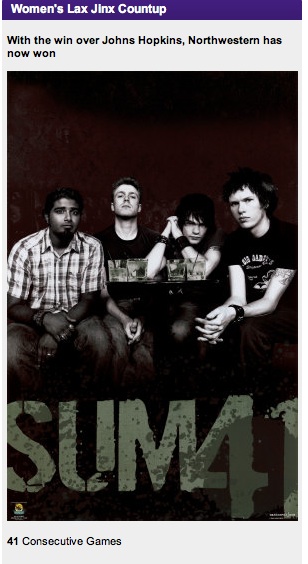 You'll notice it's not here anymore. That's because our No. 1 Northwestern Wildcats - in their first live televised game on the Big Ten Network, in front of a crowd of like 1500 people - are going to be the No. 2 Northwestern Wildcats, because they lost 18-16 to the No. 2 North Carolina Tar Heels, who are going to go ahead and be the No. 1 North Carolina Tar Heels tomorrow. NU got roughed up on draw controls - which I'm sort of sure what they are - and after being tied at halftime, fell behind by 3 and simply couldn't rally back against UNC's Logan Ripley, who seemed to stop everything down the stretch.

Then again, maybe it was the jinx-o-meter that did them in. I suppose the world will never know.