Picks, only five months ahead of time

Share All sharing options for: Picks, only five months ahead of time

So I mentioned the other day that my predictions for the 2010 football season were in the Daily, sadly, for those of you who don't live near Evanston, Illinois, that leaves you deprived of my knowledge. So I took a grainy iPhone photo of the page and loaded it up here. Enjoy my grainy headshot. 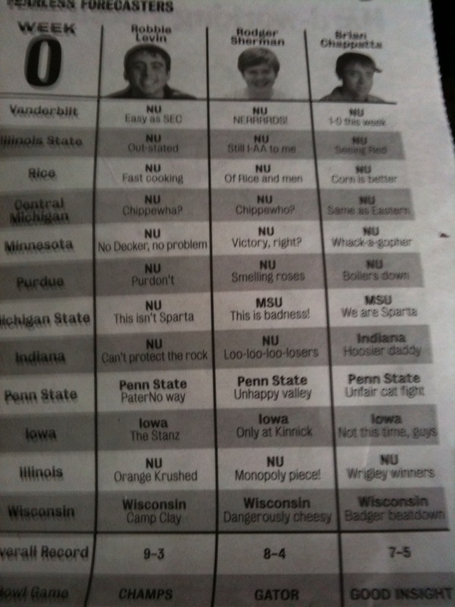 First off, what an awful, awful photo. Just creepy all around.

The weird thing is, if anything, I'd be tempted to give NU that game against Michigan State, due to all those guys on Michigan State who had to get forcibly removed from the team. When I go through it game by game, I feel like NU should go either 8-4 or 9-3.

Then I look out our roster, and say "man, this team? This team would be lucky to win seven games" and think about the Little Caesar's pizza bowl.

It's a conundrum. But we have four months to figure it out.

Also, mine originally said "Chippewas chipped away", but when I saw that Robbie's said "Chippewha?" I requested that we change mine so that we could have a "Jigga What, Jigga Who" reference.

That's all for now - this is going to be an absolutely STACKED week of posting, because I've been getting my journalism on. So get pumped, and keep it locked and loaded.