Why Is Northwestern Different from Duke?

Share All sharing options for: Why Is Northwestern Different from Duke? 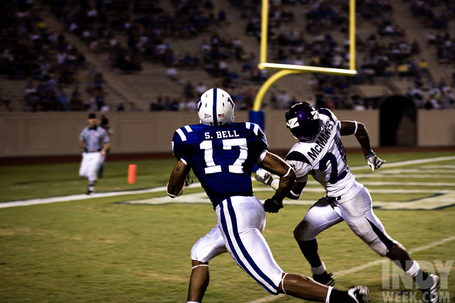 Surprisingly, judging from how much I care about sports, I'm only the second biggest sports fan in my own fraternity. The biggest sports fan - aka the dude who I went to Champaign with, one of the dudes I went to the Outback Bowl with, and the guy who tried to unsuccessfully tried to liveblog him sitting in a room with a bunch of people, including me, watching the first day of the NCAA tournament, but stopped after about three hours once people started drinking 40's - oddly enough, considers himself to be a Duke basketball fan. He's not one of those Yankees/Cowboys/Notre Dame football/Duke fans, and he certainly supports NU basketball more than Duke basketball. He just really likes Duke, and nobody can understand why, because they're so easily hateable. He cites the fact that in a world where "student-athlete" is a term, Duke is pretty much the only successful program in any major sport that really takes that term seriously.

Last night, after Duke won, there was an hour-long discussion among pretty much every sports fan in the house about the nature of why people hate Duke, which included me using the phrase "is it surprising to you that the average American is not a fan of white privilege?" - which I think is a keeper. We touched on pretty much every topic, from whether Shawn Taggert should have been expected to attend class to whether its unfair that Duke fans hated Elton Brand for leaving college earlier. It was a pretty sick debate, but, basically, we didn't resolve anything, and my personal viewpoint is still that it's really silly that we're the only country in the world that uses our education system as the highest level for amateur athletics, and that colleges make a lot of money off a bunch of kids who spend more time in basketball practice than they do in class. And I still hate Duke. (In fact, I've come to the conclusion that Duke's insistence on having really good athletes that graduate is part of why I don't like them - that's besides the point.)

But a tangential discussion of topic was definitely the link that Duke and Northwestern share - especially when it comes to our athletic programs.

The links are obvious. Both are generally well-respected academic institutions, mid-to-small sized research universities. We both have student bodies made up primarily of smart, wealthy, white kids. (Duke tends to fall a bit more on the WASP-y side of the equation, NU has the market cornered more on the Asian and Jewish markets.) We both have sports teams that compete against generally much larger Division-I athletics institutions. Both of us have had remarkably crappy football teams for the majority of our existence as schools. Fans of our opponents call out both of our schools for being elitists. And both of us have athletic departments that for the most part insist that our athletes graduate.

Yet we're so, so, different. The first thing 98 percent of people think when they hear "Duke University" is basketball. JJ Redick. Christian Laettner, Shane Battier, Trajan Langdon, dudes in white and royal blue facing off against North Carolina in Cameron Indoor. The first thing 98 percent of people think when they think of Northwestern is probably "nerds", then if we're lucky, "terrible football." But our sports programs have much different levels of name recognition. And of course, they compete for national championships in front of packed arenas and a student section that has students camping outside for days, while we don't, our games are free, and we still don't fill them up. 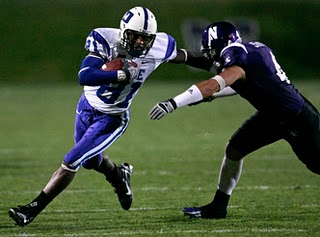 Duke seems to be a bastion of everything college athletics would be in an idealized world where "student-athlete" was an actual thing. For the most part, their athletes are tremendously talented - to the point where they compete on a national level year-in, year-out - and yet they still generally get degrees from a really tough university. Personally, I hate smart athletes - not because I enjoy looking down on athletes as stupid, but because I wish I was good at basketball, and am sort of pissed off that at least half of NU's basketball team has a better GPA than me. (NUsports.com proudly reports that our basketball team's average GPA is above 3. Mine is above 3 too, by .005 points.)

For most of its modern athletic history, Northwestern has shown the farce of the NCAA's concept of student-athletes. We've recruited guys who could pass our classes, and we've failed miserably in basketball in football. Both programs being on the upswing perhaps could restore a glimmer of hope in that ideal, but we're not the losingest program in football and the only major conference team never to make an NCAA tournament for nothing. Duke, on the other hand, has managed to carve out a niche as a basketball powerhouse while also only accepting players they feel could get out of Durham with a degree in four years, and for the most part, they've been right.

Duke is proof that Northwestern's athletic department's goals - to have athletes that can get a better GPA than me and win championships -  aren't impossible. However, it also reveals that since it's possible to do what they've done, Northwestern is doing something wrong that we haven't come close to achieving it yet, and sadly, it's something we can't do much about.

As I said earlier, the first thing you think when you hear "Duke" is Duke basketball, and the various associations - positive or negative - that you have with it, and this allows them to draw the type of recruits they need to do what they did yesterday. Northwestern doesn't have, and probably never will have, that same ring to it.

And until we break it, we won't be Duke.

So haters - and this should be all of us - continue to hate. Duke might remind us of ourselves - the school-wide monstrous lack of diversity that carries over even to its basketball team, the small school in a big conference, the nerds in the stands cheering on the smart-asses on the field. But it's not the things we love about Northwestern that we see in Duke. We can hate Duke because they've taken all our worst aspects, the ones I just listed above, and applied them to a program that perennially wins.

Someday, and this day may never come, we might be Duke. But until then, let's enjoy being lovable losers with opponents that think we all wear Armani and check our Blackberrys nonstop, and not being the dude driving a Ferrari down the interstate with a 2010 NATIONAL CHAMPIONS banner flying out the side. Because that guy is a tool.

And because as long as people think we're lovable losers, it can be our little secret that our football team went 9-4 and our basketball team went 20-12. They don't need to know.