Today at 2:30, NU baseball kicks off its first postseason play since 2006, and because at this point, it feels like the Big Ten Network hasn't broadcast a live NU sporting event since the Nixon administration (or maybe its just since I began covering peripheral Northwestern sports), I'm throwing up a game thread for all of us who are jobless, have nothing better to do, or randomly work at places where the Big Ten Network is on TV, and they have internet access.

No. 3 Northwestern has Indiana today, and if you're wondering who they play next, well, lucky for you, the Big Ten produced this handy-dandy easy-to-understand bracket. 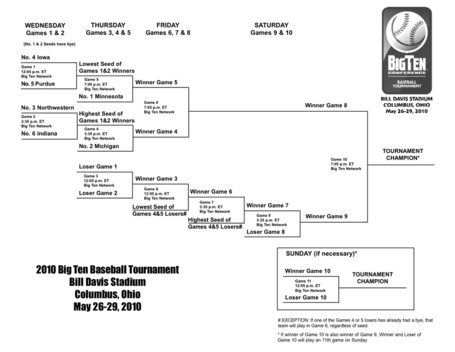 Wait, what? I've been involved in open heart surgeries less complicated than this bracket. Ted Stevens has a better understanding of how the internet works than I do of this bracket.

After about nine minutes of looking at it, deciphering runes and whatnot, I think it's a fairly simple double-elimination tournament, but I'm not completely sure. It  could also be some sort of message from the Mayans regarding the 2012 apocalypse.

Either way, NU is guaranteed at least two games, although its literally impossible to determine who their next game will be against, but, if they lose today, they'll need to win six consecutive games to qualify for the NCAA tournament, and that would just be crazy talk. So if you're chilling around, pop on the game and say something. I know its a beautiful day, and I should be outside, but the eight-page paper I have to put the finishing touches on between now and three determines that I'll be napping/watching baseball inside this afternoon, so, join me if you're broke or just pasty white and scared of the sun.

Oh, and, four NU players were named to the first-team all-Big Ten, a school record and the most in the conference which is impressive, considering there are only nine players on the field at any given time.