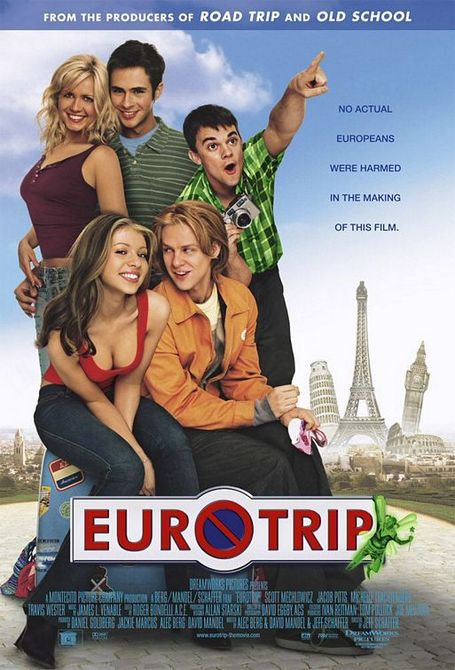 Great movie. Up there with Deuce Bigalow 2: European Gigolo.

Everything's going continental these days with regards to Northwestern's ballin hopes and dreams.

I already spoke to y'all about Alex Marcotullio's upcoming stint on the U-20 British basketball team, but today, we got news that Marcotullio in fact did make the squad. Click that link for a terrifying photo of Marcotullio in his tea-and-crumpets basketball getup. The Britsketballers take to the court starting July 14th - you know I'll be covering the living crap out of it.

But, that's not it: as part of Bill Carmody's seeming new "everything involved in Northwestern basketball must be sorta kinda related to the continent of Europe" strategy, the school announced a few weeks back that the NU squad will be warming up for the season by heading to Italy. I'll explain why this is great, after the jump.

Well, the biggest, and most obvious thing about this is: two weeks in Italy, plus ten days practice time, is invaluable.

Student-athlete is a title the NCAA comes up with, and part of that means the amount of practice time they have is limited. It's one thing to limit practice time for a bunch of supernaturally talented athletes who could play without having picked up a ball in months, it's another for a team that relies on systems as difficult to execute as Bill Carmody's. He needs weeks just to get guys - even those who are juniors and seniors - figuring out the Princeton Offense when they come back to campus, and the 1-3-1 is difficult to get used to at first, and as someone who incessantly watches and plays basketball, I could never, ever play in a matchup zone. It's too complex for my head whenever I try to figure it out.

So you're giving these guys - on a team that will look to heavily integrate youngsters like JerShon Cobb and Drew Crawford - an extra month to learn the system. Two weeks to play against Italian teams, with practice in between games, and with that, the NCAA gives the team an extra ten days of practice time to prepare. That's almost an extra month to work on spacing, cutting, all that stuff. Needless to say, NU normally figures this stuff out by the end of the year, but regardless, this is priceless. NU will likely enter the period where they normally start training - where they normally start learning who rotates where after skip passes or where to be flowing at second 21 of a 35 second shot clock in a Princeton system - with all of that already down. So they can focus on being better basketball players.

I shudder to think about what Kyle Rowley could've done with an extra month of practice so he could focus not on learning where to be in Bill Carmody's system, but on how to play basketball, keep the ball elevated, use his body to his benefit.

I expect the Northwestern Wildcats to qualify for their first ever NCAA tournament. Yeah, I said it.

A ten-day long trip to Italy to ball against pros, bond and crap, and get these guys working together months before they normally would makes it clear that this team might be different from all those other teams. Or at least it will in their heads, I feel.

And that feeling might do more than a lifetime of court time against European squads or practice time.