Canon: Before writing this, I went onto Youtube, and watched seven of Sherrick McManis' nine career interceptions. (Where you at, Ohio State 2006/7?)

I'm a Jets fan. I get to watch Darrelle Revis during the NFL season. The thing about Darrelle is that he's almost too good at covering people. He lines up with the best teams opposing receiver. Opposing QB's will throw it towards that receiver maybe three times, and each time, that guy is impeccably covered. He'll get maybe one reception for like eight yards, and one of those passes will be a pick. And when the pick happens, you're just impressed with how foolish it was of the quarterback to throw it to somebody so clearly unable to receive the ball.

When Sherrick McManis picked the ball off - which he did five times in ten games in his final season - he's almost the exact opposite. When the ball goes up, the receiver's open. Sherrick is seemingly just in place to make a tackle once the dude gets the catch. He's behind the receiver, two yards downfield, or in front of the receiver leaving him open for a touch pass over the top. It's not even all just preposterous route-jumping. Twice, the intended receiver actually catches the ball before McManis runs in and just snatches the ball from his hands. He's just a ballhawk.

But most of the time the pass went towards his receiver, didn't you get the sense he was coming down with it? I have this indelible memory of the (crappy) Miami (Ohio) game, where on one play, the quarterback dropped way, way back in the pocket, and launched this ugly-ass heave 30 yards downfield. I didn't see where the receiver was, I didn't see who was guarding him, but I remember thinking... "McManis is going to pick this off, isn't he?" And sure enough, he literally grabbed the ball out of the receiver's hands and came down with it.

Sherrick started out as a true freshman because it seemed like he could contribute as a return guy, and he did. And he was pretty good at that. But it's tough to say whether he ended up switching out of that position beause he wasn't good at it or because he became too valuable to the team in other ways.

Sherrick was our lockdown corner. I mean, he let somebody named Blair White on Michigan State get 182 yards receiving - but throws his way weren't safe. There were four games in which an opposing receiver got over 100 yards this year: two of them occurred in the eight games McManis played. The other two occured in the three games McManis sat out. (I'm looking at you, 11 receptions and 209 yards for Syracuse's Mike Williams!) Without him, our secondary was somewhere between "helpless" and "Demetrius Dugar". And with him, opposing wide-outs had to watch their back. Because any random throw could turn into a pick. "

Nicknames, proposed/actual: Batman. Status: Actual. Etymology: 2006, as described by Pat Fitzgerald: "He's everywhere. All of a sudden, bam! There's Batman. There he is again. Players make plays, and he's a player." I'm not a fan of self-given nicknames, but as far as I can tell, McManis definitely gave himself this moniker of questionable coolness. It never really caught on outside players on the team and an occasional author writing a feature on McManis, and that's not really that disappointing. It was never really sure whether he was referring to the happy Saturday morning cartoon character or the morally ambiguous character from the comic books and movies with a disturbing past. I'd like to think he wasn't referring to that guy, what with the dead Heath Ledger giving a better acting performance and all.

Pickmanis: Status: Semi-actual. Etymology: Well, his last name is McManis, and he got a lot of interceptions. When you have an awesome, very individualized nickname like this that's awesome, I don't know why you'd ever like to be referred to as "Batman". Nuf said.

Legacy:(I probably should explain: it's my personal theory that college athletes are in our mindsets for too short a time to get remembered for big picture things, like their skillsets, personalities, and whatnot: college players get remembered for moments, individual games, and just these quirky little achievements that allow us to see their name years later and remember that one exact moment. I'll try to pinpoint one for each of these guys.)

In my last one of these, I said that Corey Wootton had a season-defining play sacking Ricky Stanzi, but, let's, like, take a look at this video.

So, Northwestern got off to a pretty sub-par start to the season last year. Won the first two, then there was the debut of the Mike Williams show at Syracuse, then we lost to Minnesota. Heading into Purdue, we were 2-2, 0-1 in conference, and on a 2-game losing streak.

Then we went down 21-3 to Purdue. Purdue is terrible. And we were losing by 18 at the 12 minute mark of the second quarter.

Then we get to the 1:00 minute mark of this video.

(Note to opposing coaches: when you have a commanding lead against Northwestern and you have the ball on your own 3- or 4-yard line, DON'T HAVE YOUR QUARTERBACK DROP BACK TO PASS WAY DEEP INTO THE END ZONE. IT WILL ONLY END IN SADNESS AND DESPAIR FOR YOU AND YOUR FANS.)

Sherrick jumps the living crap out of a route over the middle. (remember what I was saying about Sherrick always looking out of position and luring quarterbacks to throw the ball in his direction only to swoop in and take the ball away. Yeah. That.) Suddenly, we go from down 18 with Purdue driving to having the ball in the red zone.

Now, I'm not going to say Sherrick is responsible for the W in this game - he had nothing to do with the rest of the team's 17 unanswered points leading to a 27-21 victory, except improving his coverage on Purdue's wide-outs - but his play was certainly a season-turning sparkplug.

Thing I wish I knew while Sherrick was still at Northwestern: That he is, in his own words, "a racquetball baller." STRAP ON THE GOGGLES, OPPOSING QUARTERBACKS, SHERRICK MCMANIS HAS A RACQUET AND HE'S READY FOR WAR. 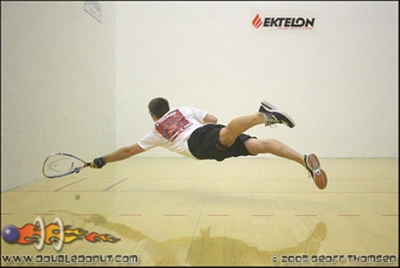 Sherrick McManis in his natural environment

Where he be: Sherrick was a fifth-round draftee by the Houston Texans and recently signed a four-year contract worth just about $2 million. He'll have some trouble breaking into the Texans' lineup - they have a slew of corners ahead of him on the depth chart.