It's summer, and you know what that means: time for the focus of this site to shift to NU players participating in obscure international basketball tournaments. And the good international basketball gods have sent us a gift we won't soon forget: Alex Marcotullio - you know, the backup guard on our basketball team, the one who is American and not from Great Britain? that one - will be participating in Great Britain's U20 tryouts.

International basketball is hilarious, because stuff like this happens all the time. Turns out Marcotullio's grandfather came from Scotland, so, apparently that's good enough nowadays. (By that standard, I plan on taking the next month trying out for the Cuban and Polish national basketball teams.) I'll have a longer post about the implications of all this, but I felt like pointing out how great and awesome this is now, although I wish he was playing for a more obscure country than Great Britain, also, that he wasn't a loyalist traitor trying to impose the King's outrageous demands on our beloved colonies. 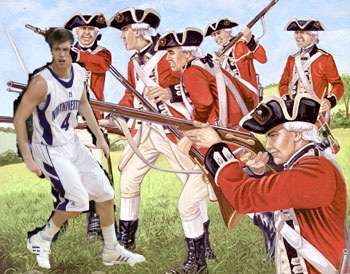 An artists rendering of Great Britain's U20 training camp