(Refresher: these posts come in multiple parts: Canon, featuring a disgustingly melodramatic retelling of the career of the player [or at least as much as I can remember], Nicknames, proposed/actual, divulging any nicknames of said players, be they real or ones I completely made up, Legacy, highlighting a specific moment that I'll remember the time someone says that player's name, and Whatever the Hell Other Categories I Invent on the Spot depending on the post, which is self-explanatory)

I AM EVIL ANDREW BREWER!

THANK YOU FOR MAKING GOOGLE SEARCHES FOR "ANDREW BREWER" COME UP WITH OPTIONS OTHER THAN ME, EVIL ANDREW BREWER, THEREFORE CONCEALING MY PLANS FOR WORLD DOMINATION.  WHEN I ENSLAVE THE WORLD'S POPULATION AND FORCE THEM TO ENDURE AN ETERNITY OF MINDLESS BOILERMAKING, YOU, NOT EVIL ANDREW BREWER, WILL BE AMONGST THE LEAST TORTURED OF MY SUBJECTS.

p.s. MWAHAHAHAHAHAHA YOU ARE ALL DOOMED! DOOMED, I SAY!  DOOOOOOOMED!

Canon: We don't know much about the 2006 Northwestern Wildcats football season. It was a long time ago, memories are hazy, and what records we do have, we often choose not to believe.

What we do know is that at the time, Andrew Brewer was a freshman, and, for some reason, a quarterback.

The first time someone told me this, I knew Andrew Brewer as a wide receiver returning from injury to be a semi-important contributor in the 2008 Northwestern Wildcats. I did not believe them. I still occasionally do not believe them. But alas, here is a picture of him trying to throw a pass. 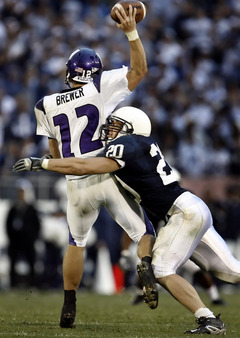 Notice he is doing an unsuccessful job of throwing a pass. When pass-throwing, quarterbacks often attempt not to get tackled, because it makes the throwing motion difficult to complete and compromises its accuracy. Incidentally, Brewer was phenomenally sub-par at quarterback, going 37-74 with four touchdowns and zero interceptions. (Brewer would eventually complete a touchdown pass as a senior on a trick play against Syracuse.)

With your average freshman quarterback, this ends badly. This ends with them riding the bench for the next 3.5 years or transferring, or, if they're lucky, getting to start as a quarterback, with all the talk coming into the season revolving around how bad they were as freshman.

But being an unsuccessful isn't much fun, and Andrew Brewer realized this. Furthermore, the Northwestern coaching staff noticed that some of Brewer's various higher power-given specifics - being 6-foot-3 and fast - jived well with the position of wide receiver.

And thus, after a year at quarterback, a year of being injured, and a year of playing fourth fiddle behind established wideouts Eric Peterman, Ross Lane, and Rasheed Ward,  Brewer emerged as a senior as NU's No. 1 option on the outside. And he had a firm grasp on the role despite having nearly twice as many incomplete passes as receptions. It was a scary idea.

Brewer provided NU's passing attack with was something invaluable: a big target with the speed to beat his man down the field. In an attack predicated on dinking and dunking the team's way downfield, the man on the outside of the formation was NU's big ball threat, averaging 16.2 yards per reception.

I mean, watch this highlight reel.

It's pretty much five straight minutes of the same play: Brewer out wide, running fly routes, beating his man, touchdown. Sometimes, there's a foil - Wisconsin's playing zone, occasionally, Kafka bootlegs, drawing the defense's attention, and once, Brewer gives a stutter step as if he's running a comeback route, getting the defender to bite. But pretty much every play is just a Brewer sprint, and Kafka dropping back, and ripping a deep ball to his first option. And with Brewer, it worked. He ended up with the fourth most yards in school receiving history.

Freshmen sometimes do stupid things. Of course they do. They're freshmen. It's what they do. (sorry, current NU freshmen.) When you put that silly stuff in the context of later successes, its easy to gloss over those early mishaps.

Let's not do that for Andrew Brewer. Let's remember that he was put in an awkward situation, outmatched and outgunned at quarterback. Let's remember that he tried to lead a disjointed Northwestern squad against Penn State, and failed. Because it makes the fact that he manned up, moved on, and used his natural talents to become a pretty damn good wide receiver all the more impressive.

Nicknames, proposed/actual: Depressingly, can't really think of any. People called him "Brew", but that's just a shortening of his name. Disappointment, especially for someone with such an awesome last name as "Brewer". I feel like something about Brewer's Yeast could work, because like said yeast, Brewer's quarterbacking career had to be sacrificed to ferment and turn something as unordinary as grape juice, or O'Douls' Nonalcoholic Beer into the sweet nutrient of life that is... fermented beverages that my adult readership can enjoy.

Legacy: Above, I recounted how many deep balls, 40+-yard touchdown catches Brewer had. But let's focus instead on the first clip in this highlight reel of Brewer playing quarterback. (Yes, after the two 2010 completions, there is video evidence of Brewer playing QB in 2006.)

In the Outback Bowl, Andrew Brewer had two 30+-yard touchdown grabs over the Auburn defense. But the play that will stick out to us all came with NU trailing 35-33, when he faked the end-around and completed an easy pass to the wide-open Brendan Mitchell.

NU loves turning QB's into wide receivers - Brewer, Eric Peterman are two prime examples. And more, they love waiting for you to not expect the inevitable trick play. I waited all season long for NU to run a trick play with Brewer - the Syracuse touchdown was more of a lateral, and the play was really created by Kafka. The year before, they utilized Peterman as a QB several times. Against Wisconsin, NU had used Zeke Markshausen - a guy with no QB credentials - to toss a touchdown. But no Brewer.

So it turned out Brewer's final touch of the ball on the college football field would come the same way he started his career - throwing the ball. And with a much better result, as he tied the game to send it into overtime. (We won't talk about what happened next.)