After my last 1LDTFS post, LTP said that it was just a doodle on a cocktail napkin short of being a perfect post.

Some saw that as a compliment, I take it as a challenge. Perfection is my goal, and nothing less is acceptable. So here's a doodle on a cocktail napkin: 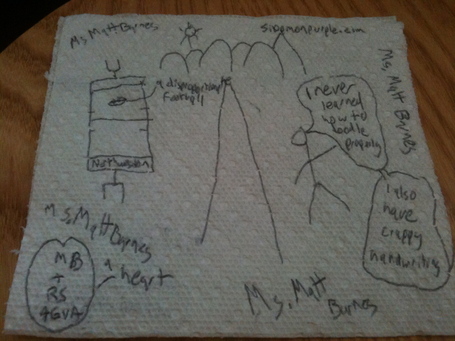 For some reason, Pat Fitzgerald insists on calling tight ends and fullbacks "superbacks". Every other football program in the nation, as far as I can tell, does not refer to them as "superbacks". The reasoning is that they have to do a lot of things: they're "super players that do super things," he says. They have to block, they have to catch, they have to do everything. In a very confusing twist, the NU depth chart refers to Superbacks as "TE/HB", which is weird, because they've never been used as halfbacks.

Meanwhile, this seems stupid to me. Not because I'm not down for innovative titles, but because to me, the things that are asked of each player really don't differ from what fullbacks and tight ends do, and players are rarely asked to vary. Last year, Josh Rooks, Drake Dunsmore, Brendan Mitchell, and Mark Woodsum played superback. I never saw Rooks, Dunsmore, or Mitchell play the position generally referred to as "fullback" - a lead blocker in a two RB set. Conversely, I never saw Woodsum play the position generally referred to as "tight end" - a sixth or seventh player on the offensive line who is an eligible receiver. I never saw Dunsmore play either of these positions, and I never saw any of the other three players split out wide as Dunsmore frequently does.

You know what? Screw it, I got cocktail napkins to spare. 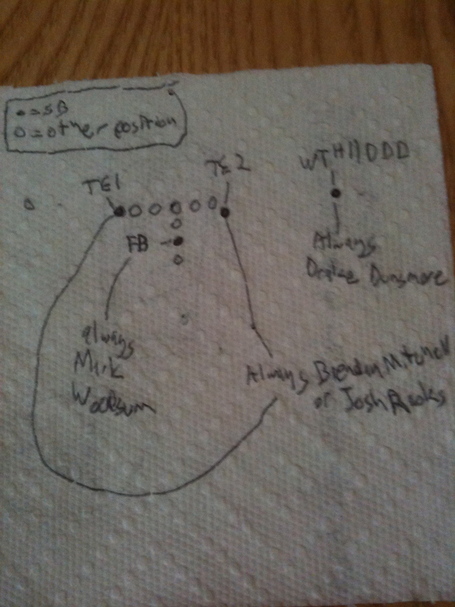 Furthermore the stats each of these players received typifies the stats you'd expect out of wide receiver, fullback, and tight end roles, rather than all four players playing some perverted hybrid role.

I am not sure why the football team insists on using their terminology. But I'm sure that I don't have to, so I won't. 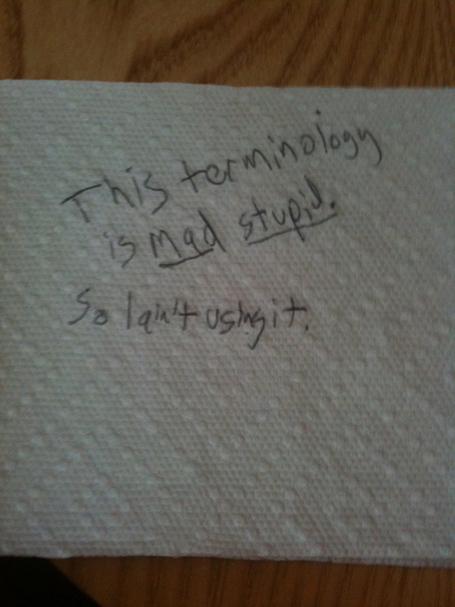 Instead, I'll refer to Fullback, Tight End, and Whatever the hell it is Drake Dunsmore does.

Fullback: For the most part, you only see Northwestern bust out a fullback on short yardage plays, such as third-and-ones and goal line calls, because most of Northwestern's plays are done out of the shotgun, which uses a single running back to block for the quarterback. Mainly called on to open up running room for the running back on short-yardage plays, although very rarely given a rush of his own, and even more rarely, asked to catch a pass.

Tight End: Again, mainly in short yardage plays, although you'll occasionally see a single tight end in regular play circumstances out of the shotgun. But most of the time one of these guys is on the field, the fullback will be as well. Oddly, I'd say the majority of the time one of the true FB/TE players is on the field, there are actually three of them: two acting as tight ends, one as a fullback, in a true goal line set.

Anyway, the tight end's job is hypothetically to block, but I think it might almost be a decoy thing. You'll rarely see NU call running plays towards them - most of the time they're on the field, all the running is directed straight at the guards - and when there's a pass play and they're on the field, they rarely act like a sixth lineman, they generally try to sneak off unnoticed and head to the end zone for the short dumpoff.

Whatever the hell Drake Dunsmore does: He's really a slot wide receiver. Beats me why he's referred to as a superback - just to throw defenses off?

Who did it last year?

Whatever the hell it is Drake Dunsmore does: This position, surprisingly enough, was held by Drake Dunsmore, who proved he can be a spectacular player out of the receiver position after missing a year due to injury. He was third on the team in receptions and receiving yardage, brought in three touchdowns, and scored a touchdown against Auburn in the Outback Bowl that actively made me feel bad for the Auburn defenders due to how badly he embarrassed them. (Note: this isn't true. I laugh at them to this moment. Hah! Burned, punks!)

Fullback: This was the position held by Mark Woodsum. He did a solid job blocking, but did little else - all his six rushes were against Towson, and he only had two catches on the year. But his job was never to have the ball, really, so, he did fine.

Tight End: Not much out of this position: Rooks and Mitchell combined for six receptions on the year. All of Mitchell's four came against Minnesota - his two-point conversion in the Outback Bowl technically doesn't count as a reception in the statbook - and Rooks grabbed two, including one 25-yarder against Syracuse. Mitchell did snag a touchdown though against Minnesota, so he made it count.

Whatever the hell it is Drake Dunsmore does: As you can tell by the fact that this category isn't called "Whatever the hell it is Drake Dunsmore did", it's still Drake Dunsmore. I'm a huge fan - he'd be NU's tallest wide receiver, and wouldn't be our slowest, either, and has tremendous strength that can - and will - help him break tackles that would fell other wide receivers. I wouldn't be surprised to see Dunsmore become essentially our No. 1 wide receiver, even though he's technically a superback. I definitely feel more confident with the ball headed his way than I do with it going towards Jeremy Ebert or Sidney Stewart, if that's worth anything.

Fullback: If his player profile on NUsports.com is worth anything, this position will be given to Aaron Nagel, the junior who used to be a linebacker at Notre Dame. Aaron is the elder of our two Nagels, both of whom are ex-linebackers now playing superback. (I'd have to assume Brett, the other Nagel, is our backup fullback this season.) Interestingly, a person who was on scholarship to play linebacker at Notre Dame that transferred to Northwestern to play superback was a main plot twist in Orson Welles' radio play of "War of the Worlds" that caused many 1938-era listeners to revolt under belief that the world was coming to an end.

Tight End: We still have Josh Rooks. My best guess for who the tight end on the other side of our goal line formations would be John Plasencia, a redshirt freshman who you may remember from the time he was named the Best Tight End in the World.

Is that an improvement?: Kind of? Drake Dunsmore will only get better with age, like a fine wine, so it's good to see him back and playing a more pivotal role in the system. The other two positions, we lose a little bit of experience, but I doubt it will hurt the team - although Woodsum and Mitchell were good at what they did, and really enjoyed singing the fight song after victories, to an almost disturbing level, I assume that as long as their successors can block and have a modicum of catching ability, the team will be fine. It's definitely nice to have those extra options down on the goal line, but... it's not completely necessary. I've never seen any of the new guys playing - they actually haven't played, except mop-up duty against Towson - but I wouldn't venture to bet that either of them will be world-changers that will redefine your mind's concept of superbacking. 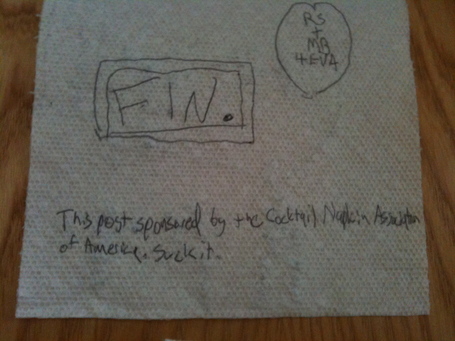