With non-conference play finally over, it's time to look ahead to the far more challenging Big Ten, and I'm here to break it down game by game. Don't worry, I'm not going to do the thing where I pick Northwestern to either win or lose each game; that would be boring. Instead, I'll assign an approximate win probability for NU in each game, based mostly on my own expert opinion (I am after all an impressive 17th right now in the SoP Pick'em league), and then crunch the numbers to produce some cool-looking charts. Exciting, huh? Click the jump for more...

at Minnesota: As anyone paying attention to the Big Ten knows, the Gophers are off to a terrible start, having lost 3 in a row at home including 2 embarrassing losses to FCS South Dakota and MACrifical lamb (copyright BHGP) Northern Illinois. On paper, this should certainly be a win for Northwestern, but it's still a Big Ten road game and the 'Cats weren't exactly been dominant against Vanderbilt and Central Michigan, two teams of similar caliber to Minnesota, so it's a long way from a lock. Vegas has NU favored by 5.

Purdue: The Boilermakers have been decimated by injuries and will be without their top QB, RB and WR for this game. And their defense isn't exactly in great shape either, having just surrendered 31 points to a bad Toledo offense. Purdue is probably a little better than Minnesota, but because the 'Cats have home field advantage, this qualifies as the most winnable game of the season.

Michigan State: This will be a big test for the NU defense, as the Spartans have one of the Big Ten's best offenses. Dan Persa should have a big day vs their suspect secondary, but even at home it's hard to feel too optimistic about Northwestern's chances.

at Indiana: It's tough to get a read on Indiana right now, as they have played an absurdly easy schedule, but they figure to be similar to last year's Hoosier team: good on offense, terrible on defense. This series has featured a number of very tight games over the last few years, and I expect that trend to continue.

at Penn State: Penn State hasn't looked too impressive so far this season, as star tailback Evan Royster has been inconsistent and true freshman QB Robert Bolden is still adjusting to life as a Big Ten QB. Still, the Nittany Lions have a lot of talent and will be tough to beat in Happy Valley.

Iowa: We all know about Northwestern's recent success against Iowa; the 'Cats have won 2 in a row and 4 of the last 5 in the series. Unfortunately, it's hard to be too optimistic about this game, especially since Ricky Stanzi is taking much better care of the ball this season and has two proven receivers to help him out in Marvin McNutt and Derrell Johnson-Koulianos (and with Corey Wootton gone to the NFL, Stanzi probably won't get hurt in the 2nd quarter like last year).

vs. Illinois at Wrigley: Although they've yet to suffer a bad loss and even have a winning record (2-1) for the first time since early in the 2008 season, the Fighting Zookers still figure to end up near the bottom of the Big Ten standings. Definitely a game Northwestern should win.

at Wisconsin: The Badgers are one of the best teams in the league and they are always tough at home; Northwestern hasn't won at Camp Randall since a thrilling double OT win in 2000. Hard to see NU getting a W in this one.

Keeping in mind these are rough guesses, let's take a look at a bar graph of the different win possibilities. Wins are labeled on the X-axis and probability is the Y-axis. 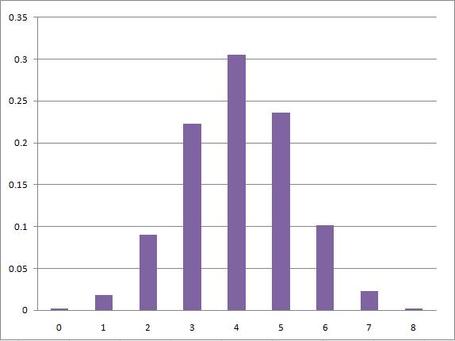 Looks like another season in the middle of the pack for NU, as the most likely scenarios involve winning 3 to 5 conference games. Some more tidbits:

It would take a major disaster for the 'Cats to not make a bowl game. That seems like a given now, but remember how bleak things looked when we were down 28-3 against Indiana last year? We're definitely headed in the right direction as a program.

A third straight conference season above .500 is very possible.

Hopefully people found this interesting; I certainly had fun messing around with the numbers. If you're interested in a copy of the spreadsheet I used to calculate all these numbers, send me an email or hit me up on Twitter (I'm @Loretta8_SoP).