Share All sharing options for: A breakdown of Northwestern basketball's non-conference schedule

So remember how last year, Northwestern played a relatively soft non-conference schedule? And it kinda hurt their NCAA tournament chances because their weak RPI meant they'd need to go at worst 10-8 in the Big Ten, maybe even 11-7? Of course, it turned that Northwestern simply wasn't an NCAA caliber team, as they faded down the stretch and were barely good enough to make the NIT. But with expectations at an all-time high going into this season, you'd think the 'Cats would learn from past scheduling mistakes and play some tough teams in the non-conference. At the very least, you'd expect them to keep the schedule on par with what it's been the last few years, with 3 or 4 power conference teams and maybe a strong mid-major or two.

However, for reasons unbeknownst to me, Northwestern has put together possibly the softest non-conference I have ever seen. Click the jump to see a visual representation....

Click here is the full schedule, along with the Big Ten games which were announced a month ago. For now I'll just break down the non-conference games, and have some more fun with win probabilities:

NIU went 10-20 last year in the MAC, including a 22 point loss at Northwestern. Even on the road, this should be a win.

A strange road game vs. one of the nation's worst teams; the Broncs were 6-27 last year in the terrible Great West conference. They did give NU a scare at Welsh-Ryan last year, but there's almost no way the 'Cats lose this one.

The first game against a real opponent comes against the Bluejays, who have been an excellent mid-major program over the past decade, making 7 NCAA tournaments since 1999. But they've missed the dance the past 3 years and finished a disappointing 18-16 last season. This will be a test for NU but they will certainly be favored to win at home.

The Yellow Jackets made the 2nd round of the NCAAs last year, but don't figure to be back after losing their two best players, Derrick Favors and Gani Lawal, to the NBA. Any game vs an ACC team will prove to be a challenge, but like the Creighton game you'd have to like Northwestern's chances at home.

They were 14-17 last year and just 2-9 outside of the bad NEC. Easy win for Northwestern.

I think this is a technically a road game since St. Francis is playing this game in their home city (although they will have to travel across the Brooklyn Bridge). Either way, St. Francis is bad (11-18 last year in the aforementioned NEC), and Northwestern should win.

Davidson is a similar team to Creighton: excellent history for a mid-major but a disappointing .500 record last year. St. John's is an interesting team this year, as new head coach and former Big Ten broadcaster Steve Lavin will look to take the Red Storm back to glory days of Bootsy Thornton, Ron Artest and company. Like Northwestern, St. John's lost in the first round of the NIT last year, so that should be a good match-up if it happens, with the edge going to St. John's due to home court advantage.

Another team from the NEC comes to Evanston in what should be another easy NU win.

NU takes a breather in the midst of Big Ten play to beat up on a team that went 5-23 last year. Basically a guaranteed win.

So let's take a look another graph. Wins are on the X-axis and probability is the Y-axis 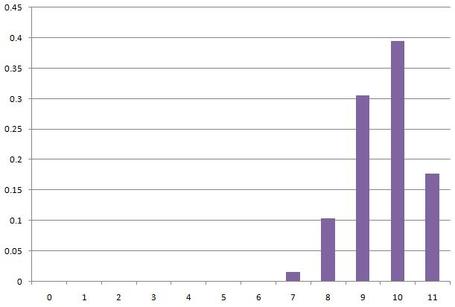 The right side of that is what you might call a fat tail. Anything short of 10-1 would be a pretty bad showing and would seriously damage Northwestern's NCAA chances. In fact, even an 11-0 record would still leave the 'Cats in a position where they'd probably need to go 10-8 or better in the very difficult Big Ten to secure at at-large bid.

For me, the word that came to mind after seeing this schedule was "disappointing."  Look, when Kevin Coble announced he wouldn't be playing basketball this season, Northwestern's NCAA chances took a major hit (it's unclear how good they were even with Coble). But it's not a totally unreasonable goal, as they still return 4 starters and add a potentially dynamic freshman in Jershon Cobb and a solid bench player in Jeff Ryan. So you would think that the athletic department and coaching staff would do everything in their power to give the team the best chance possible to make the NCAAs, but this schedule doesn't do that, and I can't think of any reason why they would schedule so soft.

While tradtional BCS conference powers may not be interested in playing Northwestern, I can 100% guarantee that if Northwestern offered to play a home and home with top mid-major programs from the Missouri Valley, West Coast Conference, Mountain West, Atlantic 10, Conference USA. WAC etc,, the vast majority of schools in those leagues would jump at the chance. You might not be able to get Gonzaga or Memphis, but you could certainly get programs like Utah State, Saint Mary's, URI or Wichita State, and that would be a massive upgrade over the bad teams from bad conferences that Northwestern is playing this season. Utah State's coach Stew Morrill is always complaining about how no one from a BCS conference will play a home and home with his team, why wouldn't Northwestern take that chance? I really just don't understand it. The only explanation I can think of is that the coaching staff doesn't think they can get an at-large bid, so they're loading up on scrubs to ensure a .500 or better record and NIT eligibility, the same way Indiana football loaded up on non-conference scrubs this season in hopes of becoming bowl eligible. If that's true, it makes me wonder why I even bother getting excited about Northwestern basketball.

I recognize I'm being really negative here, but it's frustrating that Northwestern isn't doing everything they can to make the NCAAs, especially with what figures to be their best team in decades. It would really be a shame if this team gets snubbed on Selection Sunday because of a soft schedule that could easily have been corrected.