Next on the Chopping Block: Illinois State

Share All sharing options for: Next on the Chopping Block: Illinois State 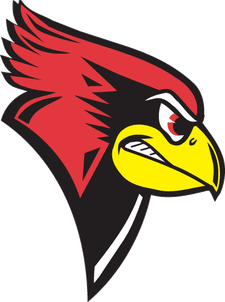 This week's victim: The Illinois State Redbirds
Where: Normal, Illinois. Jesus, there's a place called Normal, Illinois? Look, I've never been to Normal, and I don't know anybody from there. All I know is that if I lived there, I'd be terrified. Axe murderers always, always, ALWAYS, live in places with very generic place names. I'm sure it's a great place, but I'd move. You're going to die. The only things I can think of more dangerous than living in a town called Normal are going back into that creepy room in an abandoned house looking for your hot blonde girlfriend and being a black guy in the woods. Don't do either of those things, and don't live in Normal, Illinois. Unfortunately, 50,000 people do live there, and they're all doomed. Normal is located in the fascinating middle of the state of Illinois, and, no, well, they couldn't have come up with a better name.

Stadium: Hancock Stadium seats 15,000, and, much like the rest of the things related to Illinois State, has essentially nothing interesting about it. Oh, wait, hold up, it used to host the Illinois High School Championships and a semi-pro team plays there! Oh, wait, sorry, no, that wasn't interesting. My bad.

Mascot: The Redbirds. Because Illinois' state bird is the cardinal, and the team didn't want to confuse people over the nearby St. Louis Cardinals. I'M SO BORED. Oh, wait, here's something: the team used to be called the Teachers until 1923, because ISU's specialty was teaching people to be teachers. Teacher might be almost as uninspiring as a school based in a place called "Normal, Illinois", but, well, at least it had some unique flavor. Stale flavor. Like a week-old cracker, or melba toast.

Mascot if I ran the school: Because I can't find anything interesting about the school and they play in Normal, I'd go with the Illinois State Risk-Aversites. Or something about white bread and mayonnaise. The Illinois State Coldplay Albums. I'm curious to check this school's CollegeACB just to see how uninterested I am.

Notable Alums: If you're asking me, the three most prominent human beings not just to attend Illinois State, but in the history of mankind, are these three: Craig Robinson (not Barack Obama's brother-in-law, the black dude from Pineapple Express and The Office), Michelle Williams (the chick in Destiny's Child who wasn't Beyonce or the one who was in that song with Nelly) and Doug Collins (on the short list of best NBA color commentators, also, a No. 1 overall pick in his day by the 76ers.) Other people who I know are famous, but absolutely don't care about are John Malkovich, Gary Sinise, and Richard Roeper. (See? Boring.)

Current NFL Players: One. Laurent Robinson, who, unbeknownst to even many people who do follow the NFL, is the No. 1 wide receiver for the Rams now with Donnie Avery's injury. Did you know that Donnie Avery was injured? Did you know he was their No. 1 wide receiver? What happened to Torry Holt? And Isaac Bruce? And Az-Zahir Hakim? Are the Rams in some weird vacuum or land before time where NFL news neither leaves nor enters?

Difference between the amount of times Illinois State has been to the NCAA tournament and the amount of times Northwestern has: Six. Incidentally, they never made it with Doug Collins, and wouldn't until after all three NBA players in school history - Collins, Robert Hawkins, and Jeff Wlkins - had all left the school. But between 1983 and 1998, they'd earn six berths in the tourney, and end up knocking off higher ranked opponents three times. The only way anybody reading might remember them is from a 1998 overtime 82-81 victory over Tennessee, followed by a loss to Mike Bibby and the Arizona Wildcats the year after they won the whole shebang.

Elsewhere in Illinois State sports: In continuing Illinois State's consistency in the field of boring me, ISU doesn't have a sport that randomly dominates some sport like every other school I do this for. Actually, on second thought, the Wikipedia article has a section on nationally ranked teams. And they are... the forensics team, who won the 2005 championship, and the co-ed cheerleading squad, who placed 2nd in 2002 in the co-ed division. So, not teams in sports that are actually sports, but there's that.

If I wasn't a guy, I'd be...: Illinois State is home to the world's oldest collegiate circus, which isn't saying much, because there are only two of them. (The other is at Florida State). Founded in 1929, it's called the Gamma Phi Circus, because it used to be a fraternity called Gamma Phi (obviously not related with the sorority at NU referred to as Gamma Phi). If you're a student or faculty member, you can perform and do weird circus stuff, and the circus performs not only around Normal but also tours the country. Some of their shows attract 16,000 spectators, which considering stadium size, means that Illinois State's circus is more popular than it's football. If only their running backs had unicycles or wore face paint that scared kids.

JUST HOW BORING IS IT: Look, maybe this place is actually really exciting, but the Wikipedia is not exactly trying to make it seem that way. For example, the fact that the page on the entire school has big sections on the library and the quad. Take it away, wiki!

The Illinois State University campus quadrangle is compact compared with other large universities, with buildings spaced closely together around a rectangular center lawn.

The quad is a popular site for dissemination of campus information including notifications of events or meetings that are taking place around campus.

Thank goodness for this haven of free information. The Wikipedia, that is. I'm done with this post.