Down of the Week: Wharrgarbl

Share All sharing options for: Down of the Week: Wharrgarbl

So, I have been using rap song titles for play of the week posts, but today I thought that I would connect with the man who most eloquently expressed my feelings about NU football right now: Notre Dame coach Brian Kelly, everybody! 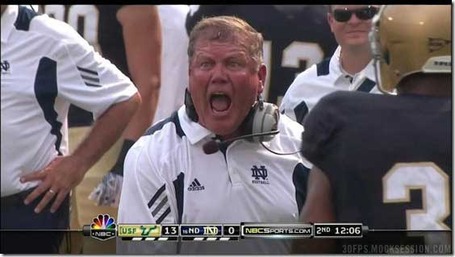 Thanks to NBC for the magnificent camera work and the internet for preserving the moment for posterity!

Now, I could indulge my inner Kelly and type until my face turns blue about NU's fundamental defensive failures or the horror of the pick six in the red zone.  However, I don't think that these failed in an interesting way.  Taking them in order: I was impressed with the Iowa line's run blocking, the NU secondary is still struggling in basically the ways they have been all year, and Dan Persa should have just taken the sack.

On the positive side, NU dominated third down on both sides of the ball.  Northwestern converted 16-22 third downs on the game, while Iowa only managed 1-7.  NU's success on offense was, to a great extent, based on the fact that Jeremy Ebert is still open against man coverage.  After the jump, I will look at how NU managed to have a good third down defense in a game where the defense struggled on first and second downs.

Iowa faced their first third down on the opening drive of the game, a third and eight from the NU 14.  They came out in a singleback set with three wide receivers and James Vandenberg under center; NU responded with the three down lineman look that fans have come to associate with three man rushes and big plays from opposing quarterbacks. 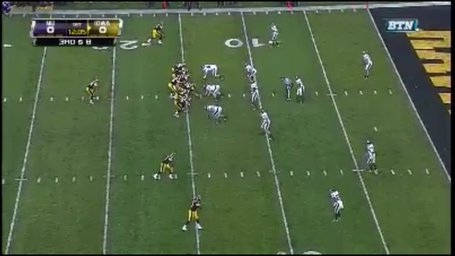 As Vandenberg goes through his cadence, however, the linebackers head for the line, showing blitz.  At the snap, NU overloads the offensive right while Vandenberg hands off to Marcus Coker on a run to the left.  As a result of the combination of the blitz to the wrong side and solid blocking from the Iowa offensive line, Coker manages 6 yards before being brought down by David Arnold.

On Iowa's next drive, Iowa faced third and 6 from their own 34.  They come out in the same formation, but Vandenberg backs off into the shotgun when he sees NU crowding the line of scrimmage from the same 3 man line look. 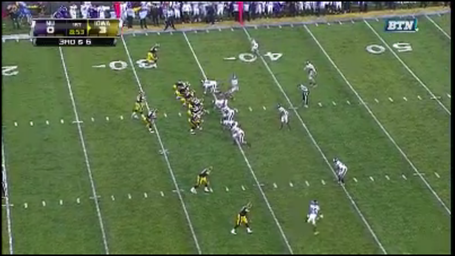 The linebackers start bailing just before the snap, and NU only rushes the three linemen.  Iowa keeps in both the tight and and running back to protect, and Tyler Scott gets his hand up to knock down Vandenberg's pass. 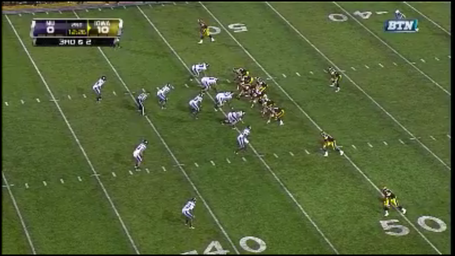 The linebackers, with David Nwabuisi shading forward and Ariguzo moving back towards the formation, are showing blitz.  Indeed, two linebackers rush and the weakside defensive end drops into coverage; this is a basic fire zone.  The blitz gets Quentin Williams free from his defensive end spot while the rest of the pass rushers collapse the pocket.  Vandenberg looks to Coker on a swing route to the right as an outlet, but Vandenberg's throw is high as a result of the pressure.  The blitz has a nice design, with Williams and Jack DiNardo executing a stunt that combines with the blitzing linebackers to overwhelm Iowa's protection.

The next Iowa third down came in the second half.  After a short pass and an incompletion, Iowa faced 3rd and 4 from their own 30.  Iowa once again has three receivers, with Marvin McNutt alone to the right and the other two as well as the tight end to the left.  NU has three linemen, with four players crowding behind threatening to blitz and all the receivers covered by a player near the line of scrimmage. 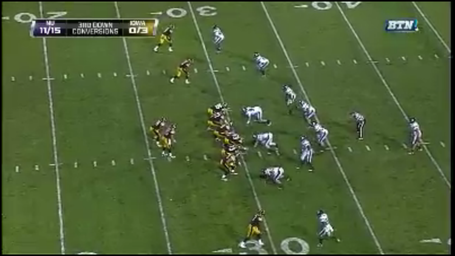 Vandenberg sees the linebackers threatening to blitz and the tight coverage and heads under center, though the running back doesn't shift.  He takes the snap under center, 6 NU players rush with limited effectiveness, and Vandenberg takes throws to McNutt running a fade without feeling any pressure.  Jordan Mabin makes a good play to break up the pass; though he doesn't see the ball coming in, he sticks with McNutt and hits him while the receiver is securing the ball.

Iowa's next third down was a third and one from their own 45.  Iowa comes out in a strong-I formation with two tight ends and a receiver to the right (the line might be unbalanced to the right, but I can't make out the number on the tight end on the right side of the line).  The h-back motions from right to left, and Northwestern has an 8-man box with both safeties in position to play the run. 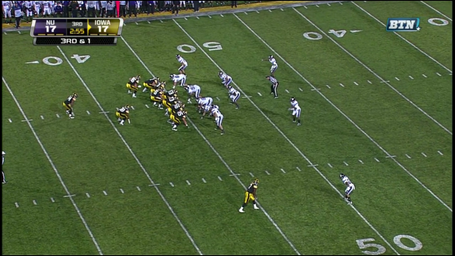 Iowa runs inside zone to the right; the offensive line dominates the point of attack, Coker cuts back left, and Brian Peters can't squeeze down fast enough to prevent the first down.  This was Iowa's only third down conversion on the day, and it was a critical play in the game, as Iowa took the lead never to relinquish it later on this drive.

Iowa's next third down went from a third and twelve on the Northwestern 22 to a third and 27 at the NU 37 due to a false start and a holding penalty.  Iowa comes out in the shotgun with three receivers; NU has a four man line with the secondary and linebackers playing well off the line of scrimmage. 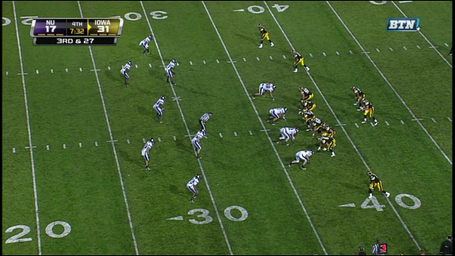 The rush isn't terrible, but Vandenberg sees the coverage drop deep and fast, so he dumps the ball off to Coker on a swing route to the right.  Coker gets a block from one of his receivers and manages to get 15 before going down, putting Iowa back in field goal range.  Though Iowa didn't get the first down, the gain set up a field goal to extend the Iowa lead to three scores.

Iowa comes out in the same power formation as their third down conversion, and the h-back motions the same way as on that play. 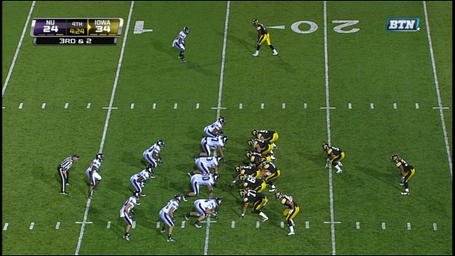 The zone run goes to the left this time, and David Nwabuisi penetrates to make the stop short of the first down, bringing up 4th and one.  Iowa brings three tight ends into the game and puts the backs in an I-formation.  NU, perhaps mindful of the problems defending QB sneaks against Army and Illinois, packs the middle of the line. 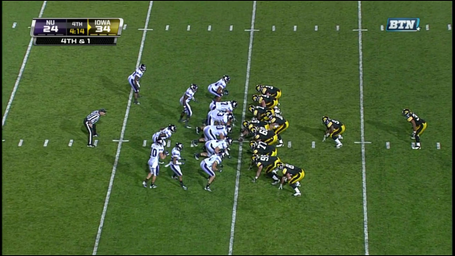 Vandenberg fakes a dive, while the left guard pulls right and the right tight end leaks into the flat.  I think that this was designed as a pass, but Vandenberg saw that his tight end was covered and just went ahead and ran.  Since he almost scored, its hard to argue with his decision. 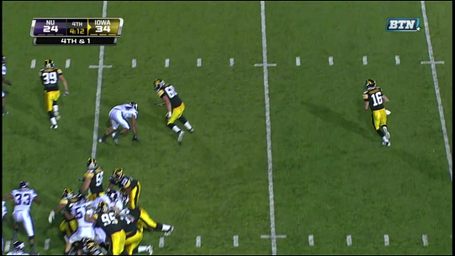 I think that there are a few things to be learned from this exercise.  First, the NU defense was significantly more aggressive than against Michigan, and it payed off on third downs.  When the 'Cats showed blitz, Vandenberg's checks were generally unsuccessful.  The blitz on the first third down almost allowed Coker to pick up a first down on the ground, but Vandenberg's throws against the other two blitzes were both incomplete, one due to pressure and the other good coverage against a McNutt fade.  When NU backed out of the blitz from the three man line, Iowa checked to a seven man protection.  This gave the secondary a better shot at the stop, while Tyler Scott's stellar reaction broke the pass up.

Against short yardage runs, NU only stopped 1 of the two Coker inside zones, with Vandenberg adding a critical scramble.  Still, while not dominant, the defense acquitted themselves fairly well on these plays, contesting the runs up the middle while covering the tight end on Vandenberg's bootleg and getting a man outside with a shot at the tackle on the quarterback; unfortunately, Iowa pulled a guard to protect Vandenberg on the play.  On the remaining play, when NU wanted to play straight coverage on third and long, they brought in Kevin Watt as an additional pass rusher and rushed 4, giving the defense a chance at getting pressure on Vandenberg.

Third downs were a rare bright spot for the NU defense on Saturday.  An aggressive approach paid off, causing Iowa to change plays and Vandenberg to hurry his throws.  The defense needs to improve on first and second downs to give the team a chance at bowl eligibility, but aggression on third downs gives a chance of covering up the weaknesses of the secondary in high leverage situations.