Play of the Week: Blamegame

Share All sharing options for: Play of the Week: Blamegame

Well that was unpleasant.  The Iowa game featured excellent drives ended by the liberal application of bullet to foot.  NU had three drives deep into Iowa territory that didn't produce points; worse, one of them produced 7 points the other way.  While that drive was the single biggest problem on the day, I am going to look at the last of these drives, when the game really took the final turn in Iowa's direction.  The key play was a Kain Colter option where Colter, like Persa on the pick six, just wouldn't accept that the play wasn't going to work and made things worse.

After the jump: why I blame everybody involved!

On third and five from the Iowa 23, Northwestern came out with Colter as quarterback in the pistol.  Jacob Schmidt lines up behind Colter, while the back to his left is Tyris Jones.  Iowa matched by putting a press corner on each receiver and putting six guys in the box, with the safeties looking at the backfield. 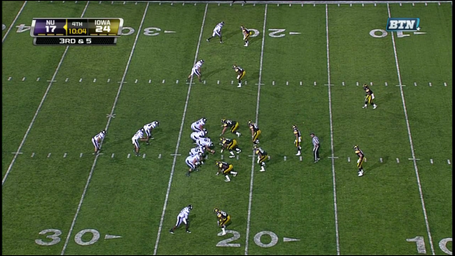 At the snap, Colter heads left on an option play to the wide side of the field.  Colter had been having some success on load option plays in this game, but Iowa had been coming close to stopping him.  The way Northwestern runs this play is to block everybody at the line of scrimmage and have the quarterback pitch either off of a designated linebacker or just the first guy to show around the corner.  Earlier in the game, Iowa had almost strung the play out before Colter made a late pitch to Venric Mark to pick up a few. 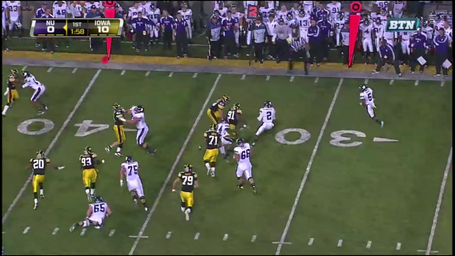 In this case, Colter was able to set his feet and step towards the pitch man, who had maintained his pitch relationship and was ready for the ball.  Still, the play only managed a one yard gain, and Mark received the pitch almost out of room against the sideline.

Back to our play, Iowa does a great job of stringing Colter out wide.  The defensive end on the playside gets great penetration, forcing Al Netter to hand him off to Jones and Colter to take a deeper path than he would like to the edge.  This results in Schmidt losing his pitch relationship to Colter.  Worse, although Netter gets downfield to pick up another Iowa defender, the pursuit from inside means that there are two defenders (circled) ready to pick up Colter and Schmidt. 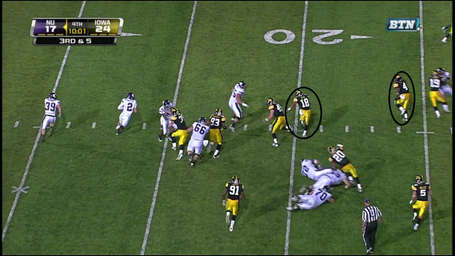 Colter finally gets around the corner and sees a defender in his face.  With the defender bearing down to deliver a big hit, Colter doesn't have time to look and make a good pitch.  Instead of just taking the hit and leaving Northwestern in reasonable field goal range, he decides to make a desperate pitch to a running back who isn't in position to receive it. 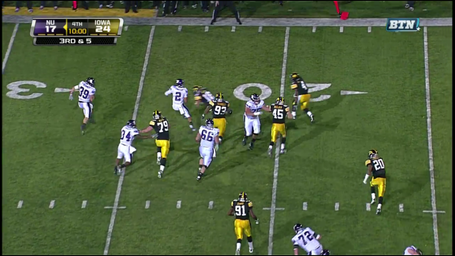 Fortunately, the pitch runs out of bounds and NU gets the chance to kick a field goal, but Jeff Budzien proved unable to match the career long kick he made earlier in the game.  Iowa would march down the field for another touchdown, and Northwestern never was able to get the lead back down to one score.

This play was the subject of playcalling criticism in the open thread, and I can get behind the criticism.  While Colter had been successful running option, Persa was carving up the Iowa defense on third downs with precise throws to Ebert.  Instead of keeping the best quarterback on the field and letting him work, the play call put the game on Kain Colter's shoulders.  Furthermore, Schmidt is not the back for this play.  It is one thing to run speed option with Schmidt as the back when the defense might be looking pass, but the Colter pistol set is all about running the ball.  Adonis Smith or Venric Mark would have made more sense as the pitch back.

Of course, the execution of the play was also lacking.  The offensive line both allowed penetration and failed to cut off pursuit from inside.  Let Colter get to the line of scrimmage sooner, and the play might work.  Sealing off the pursuit so that NU has numbers at the point of attack might also have sprung the play.  Colter's pitch obviously didn't help matters; if he just eats the one yard loss, Budzien would have faced a significantly easier field goal.  Though Schmidt is responsible for being in a pitch relationship, he is always going to struggle to keep up with Colter on a run to the edge.  This is makes the decision to use him instead of a faster back maddening.

So, faced with a critical third down deep in opposing territory, NU took a star senior quarterback off the field to dial up an option play that had had mixed success so far in the game.  Everything short of turning the ball over went wrong during the play, and Northwestern failed to answer Iowa's touchdown with even a field goal.  Before this play, I was full of optimism: Northwestern was playing the role of Michigan from the previous week, falling behind early due to turnovers before roaring back in the second half.  After this, however, NU never seriously challenged Iowa; the defense finally collapsed, Persa fumbled on the next possession, and by the time NU scored again the game was practically out of reach.

Coming later this week, I will look at how the NU defense was great at getting Iowa off the field without being particularly good while Iowa was on the field, and my midseason review takes the form of a scouting report for next year.