Play of the Week: Lesson 6: the Lecture

Share All sharing options for: Play of the Week: Lesson 6: the Lecture

Unlike pimpin', which sure ain't easy, bloggin' sometimes is just too easy.  In the past, I have written about the importance of end-of-half drives; last week, I noted how Northwestern's 3-lineman nickel look can open up big running plays when the defense tries to overload a side.  This week, these two topics combine to torment the Northwestern fanbase!

If you know what comes after the jump, please don't leave.  If you don't, be ready to be appalled.

Facing a third down in the red zone near the end of the first half, Pat Fitzgerald called a timeout, stopping the clock with 55 seconds to go.  The next play was an incomplete pass, setting up a field goal to put NU ahead 24-20 but leaving Penn State the better part of a minute and three timeouts to answer.  A big kickoff return set the PSU offense up with good field position.  After two plays, however, Northwestern looked like they might take the lead into halftime; Penn State had just called a timeout with 30 seconds remaining before lining up for 3rd and one from the Penn State 46. 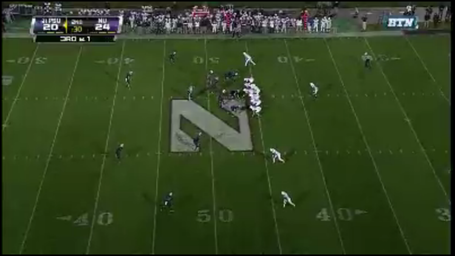 Apologies for the horrendous picture quality, but this is what the BTN's replay looks like right now.  Penn State has Silas Redd as the single back, with a tight end and two receivers to the left.  Northwestern is in a 3-3 nickel look, with the DBs playing back to defend deep passes.  The linebackers are shaded towards the offensive right, with one over each guard and another behind the left defensive end.  Penn State snaps the ball immediately after getting to the line.

Penn State runs inside zone to the right.  The frontside of the offensive line sticks to their blocks without getting much movement, but the story on the backside is quite different.  The tight end takes on the defensive end (I have no hope of getting numbers off of the NU jerseys at this picture quality), walling him outside.  This allows the tackle and guard to immediately release to the second level.  Because of the defensive alignment, this means that there are two offensive linemen to block one Northwestern linebacker.  Not only that, the linebacker reacts to the initial run action by shuffling to the offensive right.  This opens up a massive cutback lane for Redd. 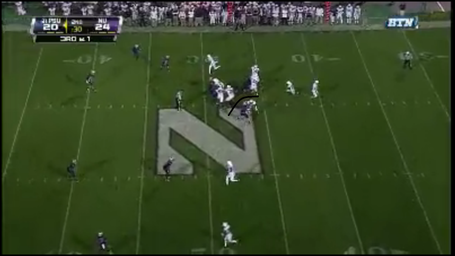 One marker of just how bad the gap control is on this play: after the PSU tackle blocks the linebacker, the guard realizes that he can't find anyone to block and just spins in place looking for a defender. 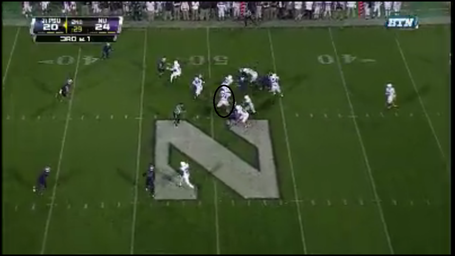 As he gets into the secondary, Redd sees Brian Peters squared up to take him on.  He also sees one of the receivers making a great downfield block, which he cuts outside of. 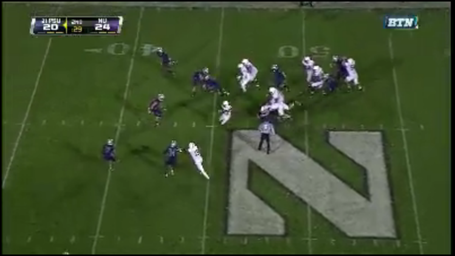 The outside receiver also makes a good downfield block, allowing Redd to extend the run further before he is brought down for a gain of 42.  This sets Penn State up at the Northwestern 12 with twenty seconds and two timeouts; Penn State runs 4 plays (incompletion, completion to the one, spike, touchdown) to take the lead with 6 seconds remaining in the half, never to relinquish it.

The defense got almost everything possible wrong on this play.  The defense seemed to expect a pass, bringing in a personnel group better suited to pass than run defense.  Furthermore, they aligned with only two defenders (linebacker and defensive end) to cover the three blockers on the offensive left (guard, tackle, and tight end).  This means that these two defenders must cover at least three gaps; if the nose tackle isn't playing the A-gap to this side, they have four gaps.  This is not a recipe for success.

The linebacker's move towards the offensive right is an almost superfluous detail at this point.  The offense is able to release two linemen to take him on, meaning that even if he sticks in one of the gaps where he is needed the offense has more than enough blockers to take care of him.  Combined with good downfield blocking, Redd has plenty of room to work with.

The announcers noted that Penn State snapped the ball quick after coming to the line; either this was called or McGloin saw that NU was in a vulnerable alignment and got the play off quick.  I doubt that this was where the linebackers were supposed to end up, but Northwestern was too slow to get lined up and Penn State took advantage.  Whether part of the defensive call or the consequence of confusion as the offense came to the line, breakdowns in gap control of this magnitude are inexcusable.

The Iowa and Penn State games have seen what was previously a solid run defense come unglued.  It is quite possible that schematic adjustments intended to improve the pass defense are ruining the run defense.  Tyler Scott's injury certainly didn't help matters.  Yet plays like this, where the defense isn't remotely ready to defend the run, certainly don't help either.  Northwestern didn't have any huge breakdowns in pass defense; on the long touchdown, the receiver just beat the coverage deep.  Given how this season has gone, this counts as progress.  Yet if the 'Cats trade pass defense breakdowns for run defense breakdowns, the cure may be as bad as the disease.