Share All sharing options for: Play of the Week: Ain't Sayin' Nothin' New

There is no way to sugar coat Saturday's loss: Northwestern had Illinois down by three scores and let them out of the hole.  Worse, the 'Cats squandered a golden opportunity after Brian Peters forced a fumble that set up a beastly Jacob Schmidt touchdown run to reclaim the lead.  Illinois scored touchdowns on 4 of 6 drives in the second half; the other two were a three and out on their first drive of the half and the fumble to set NU up to take the lead back.

The player of the game was undoubtedly Illinois receiver A.J. Jenkins.  He caught 12 of Nathan Scheelhaase's 21 completions, gained 268 of Illinois's 391 passing yards, and scored all three passing touchdowns for the Illini.  His receptions included a fifty yard touchdown to pull Illinois back within one score and a critical 28 yard pass to start the game-winning drive.  The long touchdown in particular shows a persistent problem for Northwestern against vertical passing.

At the start of the fourth quarter, Illinois faced a second and 2 from midfield.  With the ball on the right hash, Illinois motioned a tight end from left to right, resulting in a strong-I formation.  The NU linebackers respond to the motion by shifting to the defensive left, and the now strongside linebacker walks down to the line of scrimmage. 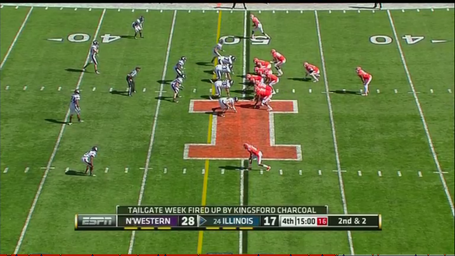 At the snap, Scheelhaase turns and fakes to the halfback heading right.  The offensive line slides left, while the tight end, fullback, and halfback all stay in to protect the right side.  Illinois has 8 blockers in the protection on this play; the ball is going downfield from the start.  With only the receivers running routes, the strongside linebacker joins the defensive line rushing the passer.  The Illinois max protect scheme, however, holds up perfectly even though the halfback doesn't engage a rusher. 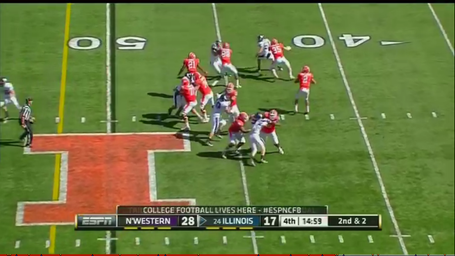 Scheelhaase has plenty of time to look downfield, where he finds Jenkins running a post route from right to left all alone behind the defense for the easy score.  A look at the replay shows why: the other receiver crosses underneath Jenkins, drawing the attention of the other deep zone players and letting Jenkins get behind them.  The other receiver is circled in black, the NU deep zone players chasing him in orange. 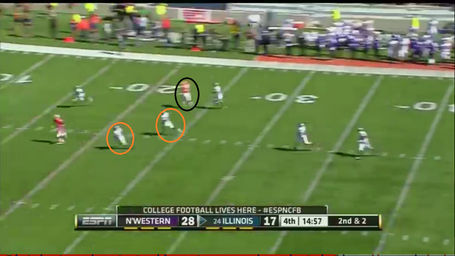 Much credit goes to the ESPN production crew, who gave us a replay that lets us see Jordan Mabin have an "oh, hamburgers" moment when he looks to hand Jenkins off to the deep middle defender only to realize that there is nobody ready to pick him up. 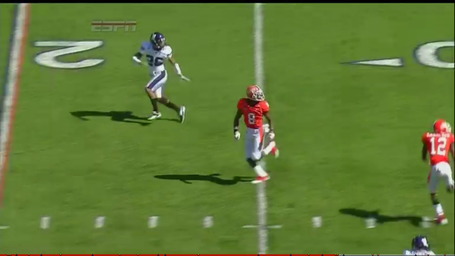 Mabin had played Jenkins just as a deep third defender should, maintaining outside leverage as he went deep.  When he sees the receiver crossing under, he widens to pick up this receiver.  Unfortunately, the deep middle defender visible in the bottom right corner of the picture is too shallow and headed in the wrong direction to pick up Jenkins; the same is true of the defender to the other side.  Scheelhaase puts the ball over the top of the defense and Jenkins picks up an easy touchdown.

In important ways, this play resembles the Eastern Illinois 72 yard touchdown pass that I previously wrote about.  Both plays used a deep cross to open up a post behind it for a long touchdown, relying on aggressive play from the NU secondary to open up big plays.  EIU brought both receivers across from the same side and added a second post to occupy a defender, while Illinois had the receivers come from different sides and went with a max protect scheme.  Part of this is the difference between spread and pro-style offenses, but part is also Illinois adjusting to a Northwestern pass rush that gave them trouble in the early going.  With the NU pass rush neutralized, Scheelhaase was able to let the routes develop and drag NU defenders out of position.

After a second consecutive loss, maintaining optimism is a struggle.  This goes double when the same defensive flaws against deep passes that were evident against BC and EIU are still evident.  I was upbeat following the Army loss because Army was a tough matchup and key players missed the game.  The Illinois game, however, showed a Northwestern team that is basically what I expect to see for the rest of the year.  The results are not encouraging.  The offense was generally solid, but the coaches showed that they have very little faith in Kain Colter throwing the ball should Persa go down.  The defensive line was excellent early and solid all game long, but the rest of the defense struggled.  The linebackers were overmatched against short crossing routes, and the secondary managed to concede short and intermediate routes without shutting down deep passes.

The Northwestern team that showed up against Illinois looks to be basically the team NU will be all season.  The good news is that the defensive line looks to be a genuinely strong unit, and the offense looks both more balanced and perhaps a little more explosive than it was last year.  The bad is that pass coverage is an adventure on defense.  Still, I remain wedded to the theory that Wisconsin is the only really good B1G team this year, meaning that every game on the schedule is winnable with a less than perfect game.  Furthermore, NU hasn't yet played a divisional opponent and the other cross division games, vs. Penn State and at Indiana, are very winnable.

The upcoming home game against Michigan, however, is critical to NU's chances of making noise this year.  Like Illinois, Michigan has some serious flaws partially disguised by explosive plays.  I am confident that the offense can generate decent yardage and score some points; the question is whether the defense can deal with Denard Robinson and the jump ball offense.  Force enough mistakes out of the Michigan offense to win and the 'Cats immediately become a serious force in the NIMH division.  Let Robinson run wild and NU would head to Iowa needing to roll off a few wins just to finish bowl eligible.