Share All sharing options for: Gettin' Familiar with: Michigan

This post is about the University of Michigan's football team. Try making a pun about your head coach. You know, besides, Hokeamania or, like, Shady Hoke which would be if he was a rapper from Detroit and not a football coach in Ann Arbor.

Us and them: Northwestern is 15-52-2 against Michigan, so, yeah, not good things. For example, these things that aren't good. 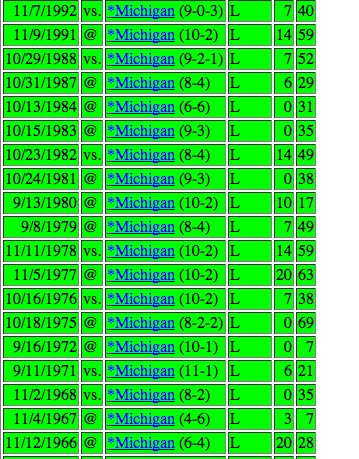 Wow. That's, like, impressive, particularly the stretch from 1968 to 1976 where NU was outscored 170-13 over the course of five games. You could say it's gotten better, especially with the famous 54-51 game, but, only in like a "There used to be a gigantic axe lodged in my chest and now I'm just bleeding profusely out of a gaping hole in my chest but at least there's not a gigantic axe there" way, as we're 2-8 against them since 1997. NU has possibly missed Michigan in two of the worst years to miss Michigan, as the Rich Rodriguez era spiraled out of control. This is discussed on the podcast, but some would argue that NU's 21-14 win in the last meeting between these two squads in 2008 was the worst time to be a Michigan fan ever, mainly because it was so cold.

When they got the ball: This is normally where I write an insightful preview of the other team's offense, I considered it but have since decided we're much better served by me just writing the words "Denard Robinson" and moving on, so here goes: Denard Robinson.

When we got the ball: This may surprise you, but Michigan: now with defense. I mean, they just shut out a Big Ten team, even if it was Minnesota, and are No. 2 in the country in scoring defense. The surprising thing is the pass defense: where last year Michigan was 112th in the country, allowing 261.8 yards per game through the air and allowing 21 touchdowns, this year, they're No. 16 with only 178.3 per game and as many touchdowns allowed as picks - four. The star of the defense coming into the year was probably Mike Martin, who was first team all-Big Ten according to Phil Steele at defensive tackle, but he only has one TFL through five games, but, well, the secondary has stepped up with safeties Jordan Kovacs and Thomas Gordon have impressed thus far.