I tend not to focus on the personal lives of college athletes. You see, I'm a college student, and I misbehave in a lot of the ways some frown upon student-athletes behaving, if not more, and I think it's screwed up that they get subjected to ridicule for getting comically drunk while I blog about stuff with no repercussions.

But, well, sometimes, I set aside my stance in cases of stupendous humor and stupidity. This is one of those cases.

Denard Robinson's apparent ex-girlfriend hacked his twitter yesterday. Hacked is a generous term; considering her occasional spelling slip-ups, I doubt she's the type to figure out how to hack into a social networking giant's system to use someone's account, more likely, Robinson just left his computer or phone open with twitter on it, or maybe he told her his password at one point in time. I didn't see the tweets until later - the account, @DenardX, is now not for this world - and upon further review, he didn't say anything interesting, just that he cheated on her and he changed.

But when the most dynamic player on a team you're playing in two days has a jilted ex-lover angrily calling him out on the internet, you don't let it go softly into that good night.

For your sake, here's what it actually said: 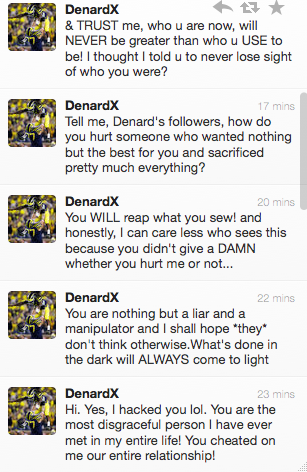 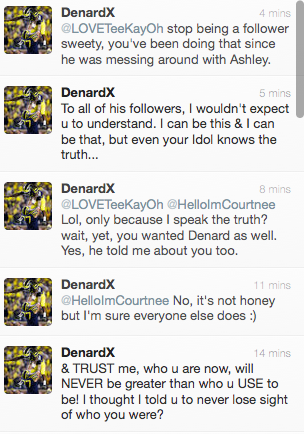 Specifically, @NUhighlights - the guy who puts up the videos on Youtube of Northwestern wins - had a field day with the football puns.

RT @NUhighlights He's still sloppy with the ball, apparently. And it's clearly a failure to monitor situation.

RT @NUhighlights His ex's mistake was applying too much pressure. You have to contain.

RT @NUhighlights We now know that Denard's weakness is commitment. Have fun game planning that one, coach Hank.

RT @NUhighlights  And I suppose we now know why he got used to running without tying his shoelaces. Didn't have the time.

RT @NUhighlights We also know that this game won't end with Denard taking a knee. How long ago should I have stopped?

Obviously, the answer was DON'T STOP, but he was out of jokes. The best I could do was a "what's up with mobile quarterbacks for Big Ten powerhouses receiving impermissable benefits" joke, but NUHighlights was ballin' out of control.

Fake Evan Watkins obviously got in on the act too.

RT @FakeEvanWatkins Denard, do you know how to keep ex-girlfriends from hacking your account? Not letting them think they were girlfriends to begin with.

It's harder than it sounds, Fake Evan Watkins. In all honesty, I can't imagine how hard it must be for the best player on the biggest team at one of the country's biggest schools to convince girls they're not dating him if us normal people have trouble with it, but, still, I laughed in class at this one.

RT @ESPN_BigTen Denard Robinson is even fast when he leaves Twitter.

Commenter @RevDJEsq had the idea to create an account filled with women proud to have formerly been connected to Dan Persa.

So that was that. Denard's account is now dead and gone, but that doesn't mean the hilarity is. We play this guy tomorrow. We might struggle to stop Denard on the field, but, the point is, he can't even figure out how to hide his password from a girl he used to do things with. This is the best of things. If this was basketball, we'd heckle him immensely, but sadly, Ryan Field isn't as conducive to heckling as Welsh-Ryan.

But yo, scoreboard operator, this is your time to shine.