Play of the Week: Dare

Share All sharing options for: Play of the Week: Dare

Before the Rice game, I asked for a boring win.  Ask and you shall receive, at least when it comes to wins against C-USA also-rans.  I could use this space to spotlight Jeremy Ebert's 90 yard touchdown, but that would be so repetitive.  Instead, I want to focus on the unit that had its best game of the year yesterday: the defense.

The defense dominated this game in spite of not making many big plays.  Four tackles for loss isn't bad, but they only resulted in a loss of five yards between all of them.  The NU defense failed to record a sack, but Nick Fanuzzi went only 13-25 for 92 yards and an interception.  This might give the impression that pressure was a problem, but a look at the interception shows that this was not the case.

With just over a minute to go in the first half, Rice faced 3rd and 11 from the NU 37.  Northwestern led 14-0 and would receive the kickoff after halftime.  If Rice scores on this drive, the game becomes competitive; if not, Northwestern has a chance to pick up a three or even four score lead on the first drive of the second half.

Rice comes out with an empty backfield with three receivers to the right and two to the left.  Northwestern responds with a somewhat unusual look: a 4-2 with the linebackers ( Ben Johnson and David Nwabuisi) outside the defensive ends (Vince Browne to the defensive right and Quentin Williams to the defensive left).  The defensive tackles are Kevin Watt and Tyler Scott.  This alignment suggests blitz.  The secondary is aligned with the corners and nickel back playing off their receivers and the safeties deep and outside the hashes.  After Rice looks away from the sideline and as the playclock winds down, Ibraheim Campbell (circled) steps up towards the middle receiver on the three receiver side; this suggests man coverage. 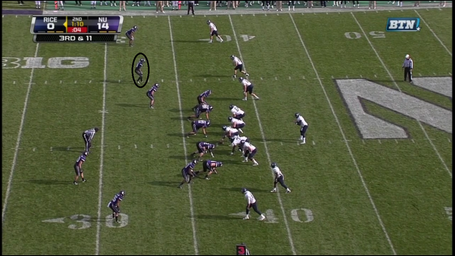 Nick Fanuzzi gets the snap, and nothing else goes well for Rice.  All 6 NU players near the line of scrimmage rush, meaning that there is going to be a free rusher no matter what.  Fanuzzi doesn't have an obvious hot receiver on the play; the outside two receivers to the right both head deep, the outside receiver left breaks in at about 8 yards, and the inside receivers each hook up before working towards the sideline.  None of these are fast developing routes likely to allow a quick throw against the blitz.

To make things worse for Fanuzzi, his offensive line does a poor job of picking up the blitz.  Nwabuisi, on the offensive left, feints towards the B-gap before heading outside.  The tackle picks up the defensive end, while the guard is left blocking air.  On the other side, the tackle initially moves to block Williams, the defensive end; as the end is the inside rusher, this is probably the right choice.  Just before engaging, however, he decides to try to fan out to block Johnson.  This results in blocking neither rusher. 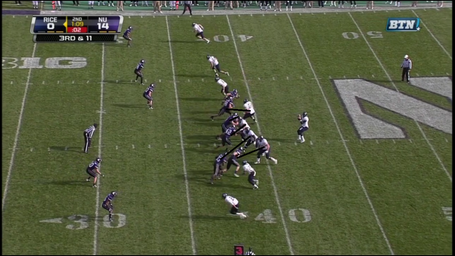 The lines represent what probably was supposed to be happening in Rice's pass protection.  When Nwabuisi heads outside, the left guard and tackle need to take care of him; either the guard needs to fan outside the tackle to find him or the tackle needs to hand Browne off inside and take on Nwabuisi.  Instead, the tackle sticks with Browne and the guard gets caught inside.  To the other side, the tackle has to accept that he can only block one rusher and take the guy he is assigned to.  This is probably the inside rusher, in this case Williams. 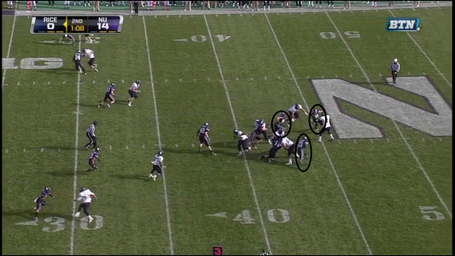 As the right tackle has absolutely no chance of blocking Johnson, there are now three free rushers where there should be one.  As Johnson arrives, Fanuzzi finally has a receiver available.  With Johnson hitting him, his throw pops straight into Scott's waiting arms.

This blitz was about the simplest blitz imaginable: six rushers with cover-0 man behind it.  Yet there is a little more to it.  First, Northwestern has four defensive ends on the field; I have seen Kevin Watt as a rush tackle a lot this year, but I don't recall seeing Scott inside with him.  Second, NU doesn't reveal the coverage until after Rice has checked with the sideline.  The initial alignment wasn't completely disguised, but it didn't shout cover-0 like Campbell's final presnap alignment did.  Third, the rush seems designed to force Rice to leave Johnson, the fastest blitzer, as the free rusher by rushing Watt against the center.  This results in three defensive linemen an a linebacker rushing at the offensive right.  Nwabuisi's feint, whether designed as part of the blitz or just his initiative, further confuses the protection.  The result of all this is that only two of six pass rushers are adequately blocked: three are completely free, while Scott is making headway in the middle when the pass pops into his arms.

My only negative from this play is that Brian Peters doesn't provide great coverage on the left slot receiver, who is open with a chance to run after the catch.  Still, I'm not too worried about this.  Quick slants are probably the biggest concern from the slot receivers against this blitz.  Peters may have been concerned about this possibility.  Further, his starting position results in part from keeping the coverage disguised; if the offense doesn't know to check into a blitz beater, he hardly needs to provide any coverage at all.  Perhaps had the receiver broken immediately to the outside he would have had a chance of picking up the first down after the catch, but as it happened his route developed too slowly to make a difference.

All Northwestern has to do for bowl eligibility is take care of business against Minnesota.  That won't guarantee a bid this year, but it is a start.  While they aren't very good, Minnesota has looked frisky recently, beating Iowa and making Michigan State sweat.  Marqueis Gray is a talented running quarterback who could cause some headaches if the 'Cats don't come to play.  Hopefully, the strong defensive performances against Rice and Nebraska continue and NU can take a four game win streak into the season finale against Michigan State.