Play of the Week: Straight Up the Block

Share All sharing options for: Play of the Week: Straight Up the Block

Northwestern scored a touchdown on each of their first three drives on Saturday.  The starting field position of those drives: NU 46, UM 43, and UM 38.  Special teams are important.

After the jump, I do my small part to give love to the guys who make special teams happen!

Coming into the game, a lot of Northwestern fans were concerned that the NU habit of playing down to bad opponents would put the Cats in a dogfight for bowl eligibility.  The opening kickoff helped change that picture. 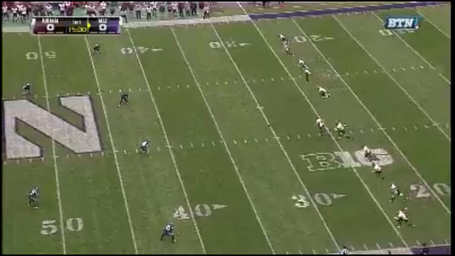 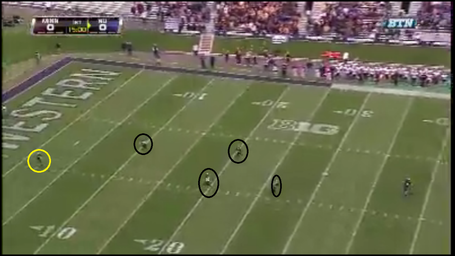 I have circled Mark in yellow and his blockers in black because of the poor quality.  What you can see is that the blockers are heading to the right, while Mark receives the kick on the right hash. 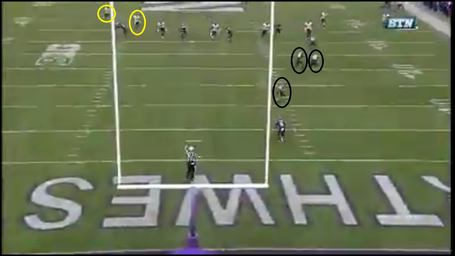 From behind the play, you can see that two of the leftmost Minnesota players (circled in yellow at the top left) have no nearby blocker.  Three NU players (Tyris Jones and Timmy Vernon are the two in front, and Schmidt is the player immediately ahead of Mark) are leading the way to the right.  Like on a running play, NU is looking to get numbers at the point of attack.  The Minnesota players, in addition to simply having a lot of ground to cover, need to be careful not to open up a big play by leaving their lanes early. 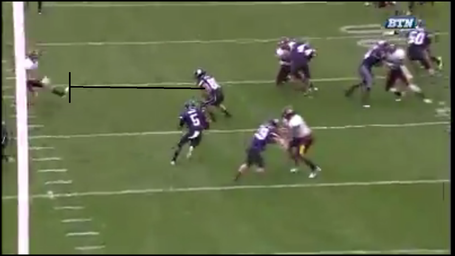 The initial blocks go well, and Mark does a nice job of cutting inside Schmidt's block as Schmidt takes his man outside.  The key block happens here: Mike Jensen, number 80, finds himself without a man to block and goes looking for somebody to hit.  He finds a Minnesota player trying to cut Mark off, and it is off to the races. 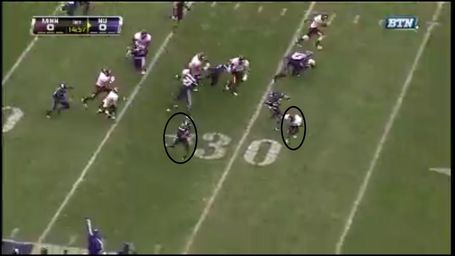 Unfortunately, a Minnesota player gets off his block with just enough of an angle to force Mark out at the 46; this play was inches from a touchdown.

Good special teams play is something I don't usually associate with Northwestern football; it seems like the opposing team always gets the big return and Northwestern has the ten yard punt.  In part, I think this stems from the depth advantage that larger schools with more prestigious programs have: special teams requires a lot of guys who can run and hit well.  If you can just throw out a collection of 4-star linebacker and safety recruits, you have a big advantage in your coverage units over a school that has to choose between playing starters and playing significantly lesser athletes.  Combined with the scarcity of returners with elite speed at small, mediocre programs and you have a recipe for underwhelming performances.

This has not been the case this year.  Budzien has struggled with field goals, but Mark (even with his difficulties fielding the ball) has been better than any opposing returner so far this year.  Kickoff coverage has been solid, and the punt unit has done a great job of preventing returns.  Keeping things together on special teams could go a long way to picking up a seventh win.

I take a game like this as, in some ways, a statement of a positive trend for the NU program: the Cats sleepwalked through the last three quarters and still won by 15.  Sure it was over a terrible opponent, but when was the last season where NU could play sloppy, uninspired football for three quarters and win comfortably?

My only big concern going into this weekend's game against Michigan State is the run of turnovers NU has suffered from: 3 against Nebraska, 3 against Rice, and 2 against Minnesota.  You have to go back to the loss to Army to find a game without an NU turnover.  The turnovers haven't hurt much during that run, but I don't like Northwestern's chances against a very good MSU team if they can't hold on to the ball.

Northwestern's bowl possibilities are confusing, to say the least.  Lake The Posts includes a roundup of projections in his post on the topic.  Things are so murky because the bottom of the B1G is going to be decided by the highly scientific "sure, they should sell their tickets" metric.  This means that fan support and momentum are important.  I'm rooting for Michigan (a likely BCS bid at 10-2), Indiana (would keep Purdue from being eligible), Minnesota (Illinois to 6-6 on a 6 game losing streak), and Nebraska (Iowa would be 7-5) this weekend.  A Michigan win would also put Ohio State at 6-6.

In a perfect world, those four results and a win against Michigan State mean the there are 9 eligible B1G teams for 7 slots+2 BCS teams, guaranteeing a bid.  Furthermore, an NU team with a five game winning streak coming off a win over Michigan State would look pretty good compared to the other messes at the bottom of the conference.  Northwestern is never going to be the most attractive team in terms of sheer numbers of fans, but a strong finish and enthusiastic support might sway selectors to take the Cats over teams with less energized fanbases.