Since I forgot to do this yesterday, it's NORTHWESTERN VS. STONY BROOK GAME THREAD AND PREVIEW SIMULTANEOUSLY TIME YEAHHHHHHHH. There'll be a postgame thread and then it's MSU stuff. So, here goes for Stony Brook.

Are they good?: Well, no. Stony Brook is, per Kenpom, the second best team in the America East conference, but that doesn't make them, you know, good, as they're No. 177 in the country overall. Last year, the Seawolves lost all eight of their regular season games in the top 200 of Kenpom's rankings - fine, they beat Vermont in the America East Tournament, okay? This year, they opened the season with a blowout loss against Indiana, pepped things up by beating the mighty MOUNT IDA, lost to Sacred Heart, then easily handled Columbia. Thank goodness for Mount Ida.

: Dougher scored more than twice as many points as the nearest player on the squad last year, but the senior opened the season with a 1-for-8 from the field, 1-for-6 from three performance against Indiana. He also led the team in assists last year with 2.1, so, passing ain't their forte.What are they good at?: Relatively little, but, well, let's say offensive rebounding. Sure, the team was actually very effective defensively last year, as they were No. 20 at defending the three and No. 22 in effective FG%, but that appears to have waned. However, they're doing a great job on the offensive glass this year, bringing home 39.4 percent of their misses.

What are they bad at?: Right now, most things. Last year, Stony Brook was No. 344 - yes, that's out of 345 - at two point field goal percentage and only shot a modest 33.9 percent from deep. This year, they can't stop anything defensively - well, except Mount Ida - but anyway, they rank below 300 in five of Kenpom's eight defensive categories, including every one involving shooting percentage. Some of this is due to a blowout against Indiana, but, well, Indiana's better this year, but they're not world-beaters, and a lot of teams have games against teams they're outmatched against early on, so, these stats still mean something.

Us and them: This is the first meeting between NU and SUNY-Stony Brook, as I've only heard them referred to for my entire life. However, we must remember that Stony Brook was the site of Northwestern's women's lax National Championship this year, putting it alongside Towson as "teams Northwestern has won the women's lacrosse national championship at and then played in an early-season tune-up game" history.

What the hell is a Seawolf?: A question that has several answers:

1) An amoral sea captain named "Wolf", as represented in the famous novel "The Sea-Wolf", which was made into a variety of movies,

2) A submarine in the US Navy, the USS Seawolf, as well as submarines of that class,

5) According to the Erie SeaWolves, a dog wearing a pirate's hat and an eyepatch:

6) Per SUNY-Stony Brook, a wolf that literally turns into a wave:

7) Per Sonoma State, a water-colored dog standing next to a wave, but unlike Stony Brook, not actually turning into the wave (note: Sonoma State was apparently known as the Cossacks until 2002, which is way better.) 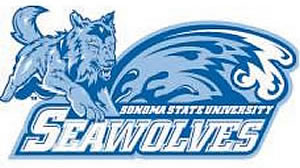 8) Per some lower-level soccer team that plays in Washington, a hastily-drawn whale that appears to be attempting to copulate with a soccer ball. 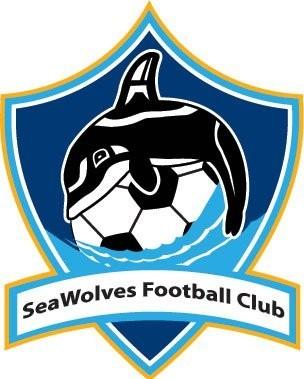 Stony Brook is located on Long Island, any thoughts?: We've been over this.

Difference between the amount of times Stony Brook has made the NCAA Tournament and the amount of times Northwestern has: None! Yes! You know Stony Brook from the never-made-the-NCAA-Tourney club. The Seawolves made the 2010 NIT after coming in first in the America East regular season but not winning the tourney, then made the finals of the Tournament last year, but still haven't danced.

How can NU win?: Just play ball. The offensive rebounding thing could be possibly construed as disconcerting, seeing NU's problems in that category, especially when the zone is out, but it's not a big enough thing to worry me. NU should gun and shouldn't need to switch into the 1-3-1. Get in, get out, don't get hurt.

This poll is closed