Play of the Week: What More Can I Say

Share All sharing options for: Play of the Week: What More Can I Say

And NU won't take a five game winning streak into bowl season.  Michigan State pulled away due to Treyvon Green's fumble near the goal line and the first real punt return NU has allowed all year, but Northwestern still had a chance in the second half.  With just under 5:30 to go in the game, a Kirk Cousins fumble and a screen pass blown up in the backfield had resulted in a Michigan State 3rd and 17 from the NU 29.  Michigan State had a 24-17 lead, and a long field goal in Saturday's conditions was far from certain.  If NU could force a FG attempt, there was a good chance of getting the ball back down 7 with a chance to tie the game with a touchdown.

Michigan State lined up with Cousins in the shotgun and trips left.  Northwestern showed a single high safety (Brian Peters) with Vince Browne as a standup end in an otherwise normal 4-man line. 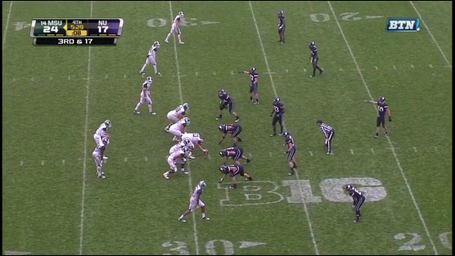 Before the snap, the inside receiver from the trips side motions to the outside right.  Peters follows him all the way outside from his safety spot; this suggests man coverage and leaves no safety deep to offer help.  Meanwhile, the defender who had been over this receiver steps up to a position from which to blitz off the edge. 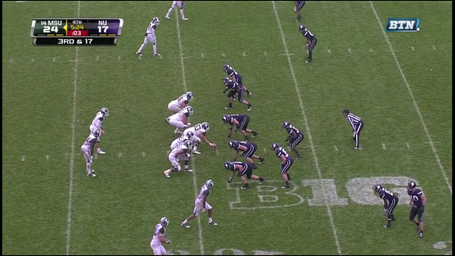 Sure enough, NU sends six men after Cousins.  The three linemen and two linebackers on the offensive right all blitz, while the edge man on the other side also rushes.  Browne drops into coverage from his standup end position.  On the right side, the blitz works: the end takes the tackle outside, the 3-technique occupies the guard, the nose takes on the center, and the back steps up to block the middle linebacker.  For those of you keeping score at home, this should leave the outside linebacker, Ben Johnson, with a free run on the quarterback.  Instead, he gets caught up behind the defensive tackle. 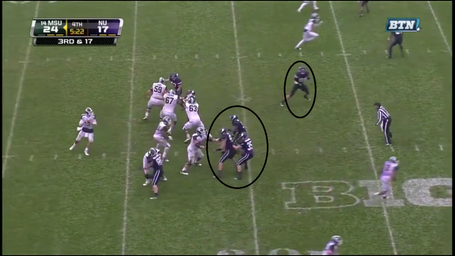 Words fail me.  One of the team's best pass rushers (Browne) is dropping into a short zone on 3rd and 17.  Meanwhile, a blitz that should have a linebacker running free at the quarterback is getting exactly zero pressure on the quarterback.  Worse, NU's coverage allowed all four receivers free releases.  B.J. Cunningham, lined up as the inside right receiver, releases vertical and cuts towards the middle of the field, where Daniel Jones has little chance. 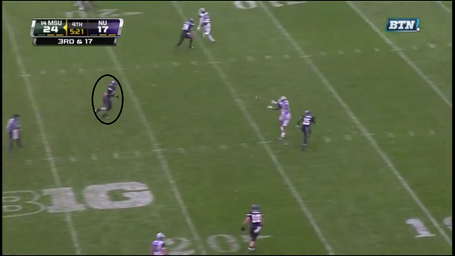 Note also that the inside receiver to the right has a step on a corner route.  Meanwhile, Browne is underneath the nonexistent shallow crossing routes.  Yet all hope is not lost!  Cunningham bobbles the ball; if Daniels can make the hit immediately, this is an incomplete pass and NU has escaped from danger. 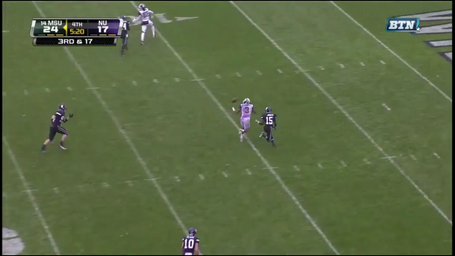 Or, you know, not.  Cunningham is able to gather the pass in.  Still, Daniels wraps him up at the five.  Maybe MSU will turn the ball over at the goal line... 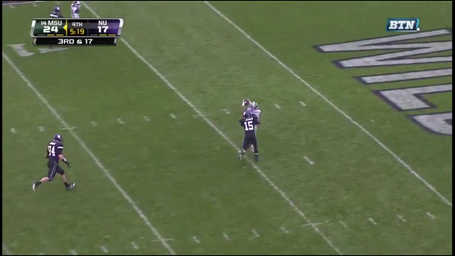 Or Cunningham could drag Jones into the end zone from the five.  That would make more sense.

There was a lot of fail here.  NU fans (including this one) have frequently been frustrated by a conservative defensive approach, but this was an odd sort of aggression.  On a play where the first playcall has to be to Grossman it (F it, I'm going deep), Northwestern plays cover-0 behind a blitz and drops one of their best pass rushers into a short zone.  If you are only going to rush six, wouldn't it make more sense to have a safety deep than a defensive end short?  The blitz works like it should on the chalkboard, but one of the blitzers bizarrely pulls up instead of shooting the open gap and perhaps forcing a bad throw.  If this is by design rather than poor execution, I have no idea why you use a spy on 3rd and 17 against Kirk Cousins.

Meanwhile, a freshman corner who is only in the game due to injury is matched up one on one with the opponent's leading receiver.  Once again, how does it make sense to drop a defensive end from the other side and not give Jones any help?  This is especially true of a blitz that declares its coverage to a simple motion across the formation.  If you are willing to show cover-0 man that obviously, why not put your better corner on Cunningham?  I don't have much faith in Jeravin Matthews in man coverage on Cunningham, but the starter ought to be the better choice than the guy only on the field due to injury.

Jones was dealt a tough hand, but he could have provided better coverage.  Any time a receiver can knock the ball into the air and catch it again without being touched, the defense seriously messed up.  At the very least, Jones needs to get Cunningham down short of the goal line.  Instead, Cunningham is able to convert a tough third down and provide the dagger in any hope of an NU comeback.

So remember the nice stuff I said about the NU punt unit last week?  Yeah, that didn't hold up.  The teams were even on turnovers, though Northwestern's came in a more costly part of the field.  Combined with a special teams touchdown, a game with a close box score ended up rather ugly for NU.

Now we have to sit and wait to see how the bowl picture shapes up.  After their disaster against Minnesota and Zook's firing, Illinois should be the last B1G team selected.  This means that, if Michigan gets into the BCS, Northwestern will probably get a spot in a conference-affiliated bowl.  Even if Michigan doesn't, I would expect NU to be a reasonably attractive option for any at-large bids.  We will have to wait for another weekend's games to find out for sure, though.

During the lead-up to bowl season, I hope to put together some posts on the contributions of this year's senior class.  Then, after the bowl season is over, I will be looking at some promising returning players.  In the more distant future, I hope to start beating the football drum over the summer with a discussion of what the NU offense does and how I expect it to change next year.  I know that a lot of people here like bouncyhoops, but that isn't really my thing and the rest of the writers have it amply covered anyways, so I won't be posting very often after bowl season is over.